Could a variable sweep aircraft also use negative angle?

Variable sweep on fighter aircraft is a bit out of fashion, but seems to a worthwhile option to adjust the wing to the current speed and needed lift. All this is bought with complexity and weight of the system.

Would it be possible to build a variable sweep aircraft that goes low speed and in a dogfight into a forward swept wing configuration like the Su-47 and high speed in a rearward swept wing? 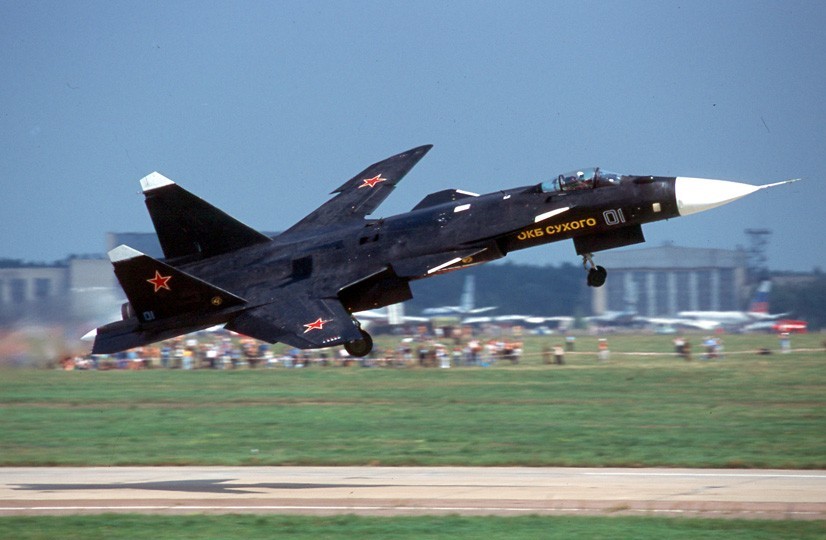 Yes it could, but don't hold your breath.

Forward sweep means that the aeroelastic forces will twist the wing at high lift into an increased angle of attack, so such a wing needs to be stiff in order to avoid divergence (PDF!). Also, aileron effectiveness is excellent, so a forward-swept configuration is a good choice for dogfighting.

Since backward sweep is mostly helpful at trans- and supersonic speed, swing wings were the right answer when very high top speeds (Mach 2+) needed to be combined with high loads at take-off and short field length requirements. When flying ever faster went out of fashion in the 1970s, the attractiveness of variable sweep disappeared.

Forward sweep helps both in air combat and in transsonic flight, so there is little advantage in a variable-sweep configuration with forward sweep. An aircraft optimised for air combat has little need to fly Mach 2+, so the moderate sweep angle is a good choice for most of its flight time. Also, the aeroelastic instability increases with sweep angle, so more than moderate forward sweep needs a very stiff and heavy wing.

Yes. Variable sweep airplanes exist and it shouldn't be a problem to design a system able to sweep the wings forward and rearwards. However, the few aerodynamic advantages of the forward swept wing at low speeds doesn't justify the added complexity, weight and loss of space inside the fuselage.

Not the answer you're looking for? Browse other questions tagged aircraft-design wing-sweep or ask your own question.

111
Why is the maximum speed of current fighter aircraft lower than those from the 1960's and 1970's?
32
What are the advantages of a forward-swept wing over a rearward-swept wing?
1
Straight Wings VS Delta Wings, Variable wing with Forward swept capability

13
What are the advantages and disadvantages of an oblique wing over a swing wing?
4
How is a variable sweep wing constructed?
32
Why did the DC-3 have wing sweep?
1
Where is the wing sweep angle measured from?
8
For aircraft with variable-sweep wings, how unstable is it to have each wing in a different position?
7
What are the disadvantages of fitting underwing flaps to a Mirage III/5 fighter jets to lower landing speeds?
0
Could an arrow planform be better for a supersonic aircraft than a delta? Why?
2
How does a variable-sweep-wing aircraft keep wing-mounted payloads straight?