Why is a straight-in approach not allowed to RWY 07 at Cluj (LRCL)?

Here's a VOR approach for runway 07 at Cluj (LRCL).

On the lower left side of the chart you will see the "Straight-in" OCA(H) as N/A and then a "Circling" OCA(H) of 2540 (for category C). There is only a 6 degree offset between the final approach course and the runway, and as far as I can tell below 30 degrees (or maybe 15?) the approach is considered straight-in.

So why are straight-in approaches not allowed but circling ones are?

Runway 07 has a published GNSS straight-in instrument approach as of 10 Nov 2016. 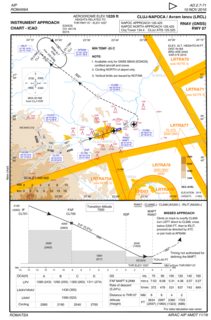 For non-GNSS equipped planes, there are no published straight-in instrument approaches for runway 07. Only the circling VOR 07.

However, in VMC the crew may request or likely be given a visual straight-in approach to 07.

As to why there aren't published minima for a straight-in VOR approach to runway 07, I can think of two plausible reasons:

When an aircraft intends to land on a runway for which no instrument approach procedure exists, it may descend on the instrument approach to another runway and, provided the required visual references are established at the circling MDA/H, maneuver visually for landing on the desired runway. This procedure is used when landing on the instrument runway is undesirable, due for example to wind conditions or work in progress.

A circling approach is the visual phase of an instrument approach to bring an aircraft into position for landing on a runway which is not suitably located for a straight-in approach.

Why they didn't publish straight-in minima is beyond what I can tell from the chart, although the combination of obstacles near the final and reduced navaid accuracy so close to the VOR seems plausible. ("Didn't feel like it because runway 7 is rarely in use" seems less plausible: once the approach has been constructed, most of the work is done, so adding straight-in mins would be negligible extra work at that point, if the criteria were to allow for them.)

The obvious difference between the VOR approach and the GNSS approach is the allowed altitude you can descend to inside of 3 miles to the runway; a precise final approach course definition (i.e. using GNSS) would allow a narrower obstacle clearance corridor - so when you're on course there are no obstacles reaching to within XX feet vertically for YY feet laterally. The less precise guidance from the VOR probably requires a wider corridor, so if some obstacle to the side of the final intrudes on the wide corridor, its minimums have to be raised to clear the obstacle vertically. Raise them high enough, and the straight-in becomes impractical, so only circling mins are published.

Note that if you got the runway in sight & could make a safe approach and landing using normal rates of descent, you could land straight-in from a circling approach. The key point would be that below the circling MDA, obstacle clearance is no longer provided by the approach and it is the pilot's responsibility to avoid all obstacles visually.

Not the answer you're looking for? Browse other questions tagged easa-regulations non-precision-approach circling-approach or ask your own question.

13
When flying a circling approach, is it permitted to begin the visual circling segment prior to the final approach fix?
12
Why are sidestep ILS minima not used in EASA-land? (specific example: EGKK)
15
Can I circle to a different runway if cleared for an instrument approach without circling minimums?
7
What are the guidelines to execute a missed approach during circling?
8
Is it OK to make an approach without any straight-in segment at all?
11
Is it allowed to fly a right traffic pattern when a left traffic pattern is published (IFR)?
5
Does a Tower controller need to see an aircraft on final to give landing clearance?
1
What are the specific side step minimums for an approach?
2
When not cleared straight in for a VOR approach, how is this type of procedure executed?