How do diffusers turn velocity into pressure?

There are many resources that give explanations for the behavior of nozzles and diffusers. But at the crux point they all say, "Velocity goes down and pressure goes up." As if that doesn't warrant any deeper explanation, or as if it were just a law of nature.

To me, the reason behind this energy transfer isn't obvious.

To maintain a constant mass flow rate, $\dot{m}=const$ , through a small inlet and a large outlet you would need a deceleration of the flow. To decelerate a flow requires a force, $F=ma$. Forces interactions are equal and opposite so the fluid would exert a larger force, relative to the inlet, if forced to slow down. But what is the origin of this decelerating force? Why does this geometry increase the $\frac{F}{A}$ of the molecules that pass through it? I understand the energy conservation, but how is this behavior explained in terms of force interactions?

Warning N°2:
Both speed and pressure settle in a way that abides the laws of physics. It's not like one settles first, then the second follows. Don't let my wording fool you.

Warning N°3:
I won't consider temperature in addition to speed, density and pressure. It's too much for an explanation.

There are many, many ways of seing this.

The wrong but easy answer

Velocity goes down and pressure goes up.

Are, often, wrong. This only holds in perfect, incompressible, irrotational flows and is known as Bernouilli's principle. If my (French!) aerodynamics teacher heard anyone mention it, that person would probably lose points! These conditions are often far from reality so the consequences don't hold every time. However it can be used as a guideline to get a gut feeling about a low-Mach flow.

(Note in locally supersonic flows, the exact opposite might apply, so this warning is legit!)

The easiest answer is energy conservation. You mentioned you wanted another:

I understand the energy conservation

Your nozzle is a convergent manifold, your diffuser is divergent. One acts exactly opposite to the other (just reverse the time in steady flow) so I'll address convergent axisymmetric shallow nozzles. Shallowness means speed is quasi-axial everywhere.

Furthermore, in aviation we are concerned with planes, so I'll assume the intake velocity is constrained and cannot go down.

Let's get to equilibrium first.

Now try to cram a still fluid through a restricting pipe. It won't like it, and will resist (inertia, plus the surface pressure of the nozzle's axial component, etc. see? Forces!), thereby increasing its pressure. This pressure increase will propagate to the whole intake and raise that pressure. And now the intake has everything it needs to push the whole fluid forward:

So the fluid effectively moves through the pipe.

How to describe the equilibrium

First off, any radial section of fluid has quasi-uniform pressure, otherwise the fluid would pick up a large radial speed, so we would not be at equilibrium yet.

Next, apply conservation of mass. It forces conservation flow throughout any section of fluid with A×V×rho=Cte. If frontal area is restricted, then either or both speed and density must increase. The amount by which each increases depend on the fluid's properties (compressibility etc). So here you go: speed must increase in the convergent nozzle. Also as a by-product, density may increase.

How does that happen?

Simply, a force must push the fluid. Remember the intake has very high pressure necessary to maintain steady-flow? Well that pressure is propelling the fluid (and there must be a low pressure at the tighter end (exit) as well).

If we do a static analysis of a thin section of fluid, it has low speed behind, high speed in front, so each molecule is accelerating. The section behind provides high pressure, that pressure translates into an axial force, the molecules accelerate. The section in front has lower pressure, and doesn't push back as much. That pushing-forward-hard/not-pushing-back-as-much is the pressure differential.

So along the flow, we should see the pressure decreases.

There you go, I've used:

While we wait for a probably better answer, here's my tentative.

You state that you understand the concept of constant mass flow. Let's for a moment write the mass flow properly:

If we want $\dot{m}$ to be constant while changing $A$, we need to change $\rho$ and $v$ accordingly. In these scenarios $\rho$ is taken as roughly constant, leaving only the velocity as free variable. While this might be more true for liquids, it is not too far from the reality also when air is involved (although you might observe minor variations in density).

In other terms the required energy comes from the pressure differential (the faster fluid has lower pressure).

Let start with something familiar. In the diffuser, energy diffuses around the entry point within an increasing volume like for air from a fan: 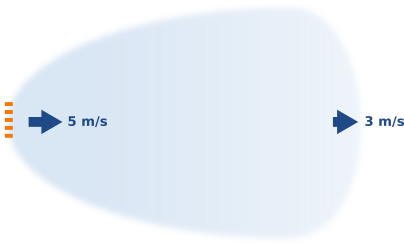 The added work being diffused, at some distance the addition of dynamic pressure becomes insignificant and velocity change is null. Intuitively you see that air being pushed by the fan, and stopped at some distance by the friction with ambient air is by definition compressed. So compression is linked to the velocity decreases.

Now let's look at what happens at molecular level. You may think of a billiard, if a ball hits a pack of balls, the speed communicated to the balls in the pack is lower than the speed of the hitting ball, due to inertia.

So here we understand that if the number of molecules receiving energy increases, then the speed communicated decreases.

3. Application to the diffuser

In subsonic flow, as soon as cross section area increases, density tries to equalize and molecules number also increases in this cross section. The number of molecules along the diffuser axis forms a gradient. 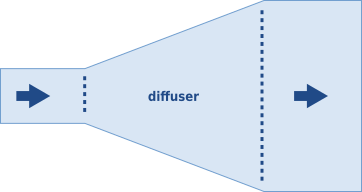 If you look at any vertical plane normal (perpendicular) to the diffuser axis: On the smaller (left hand) side there are less molecules than on the larger side (right hand).

That means less energy (total pressure) than required to maintain the same speed enters this cross section from the left. Molecules start to slow, static pressure increases. The process continues, and even less energy is communicated to individual molecules downstream. This repeats as long as the cross section continues to increase.

The high-level explanation is a valid as long as there is no heat exchange between air in the diffuser and the outside (adiabatic compression where work rises air temperature), else the relationship between pressure and velocity is more complex as energy enters the diffuser as dynamic pressure, but also leaves the diffuser as released heat.

Not the answer you're looking for? Browse other questions tagged aerodynamics fluid-mechanics or ask your own question.

7
How to calculate angular velocity and radius of a turn?
2
Are these pressure and velocity distributions calculated by CFD simulation correct?
2
How to calculate aileron deflection for achieving similar roll dynamics at thin and dense air?
1
Is there a real temperature change along a streamline when its velocity changes?
3
How is Reynolds Number derived and used?
1
Why do we see a reduction in temperature in a wind tunnel by increasing the velocity, but in a real flight it's the opposite?
2
How does the engine produce aerodynamic lift at high angle of attack?
1
Which Velocity is used to measure Dynamic Pressure?
2
Why do the two different “ground effect”s used by aircraft and automobiles do opposite things in almost the same conditions?