What does the actual path of air within a turbojet engine look like?

While Wikipedia describes the flow path as axial, I wonder if the path could be helical instead. Wikipedia explanation is described first in section 1, section 4 is for what could be the actual flow path, and sections 2 and 3 list the reasons for that. Section 5 is my question.

Not obvious on the picture, there is a stator with vanes after each rotor, to create the pressure increase on vanes pressure side, and to straighten the flow for the next stage of the cascade, else there would be no compression and the engine would be an expensive fan. See this question for a picture showing the stators.

Usual depiction of the path, taking into account blades and vanes, is zigzagging, similar to:

The path above seems valid for motionless blades and vanes, ignoring blades are in rotational motion. If we dive into a bit more detailed explanation, the path would be refined like this:

Air path is therefore spiraled a bit, the exact amount of the helical displacement depending of the ratio between air axial speed and blades angular speed. This is not necessarily the exact vane angular spacing (or a multiple of it).

If this was the correct way it works, then the overall flow would rather be helical than axial, something more like this:

5. Question: How blades and vanes impact overall air path? How the air path can be better explained, taking into account blades are not fixed?

I'm looking for some details, perhaps blade/vanes geometry and airspeed, not an over-simplified view. 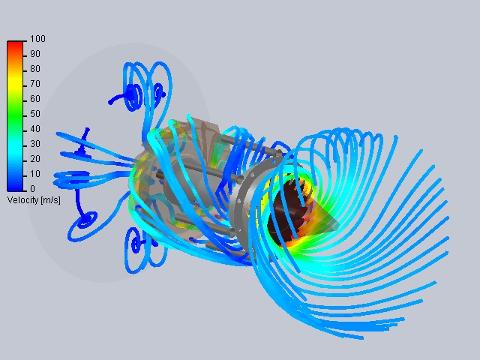 Pretty much as your illustration, but more turbulent and not as many complete turns.

Let's take one rotor disk at a time.

Each blade on each disk is like a wing. Air is rushing in at it. And it, is moving down on the air (or up from the other side). Giving the blade an angle of attack.

In a wing, air is pushed down.

So, one disk will push down on the air on one side, up the other, left and right top and bottom—the stator disk will straighten it out for the following rotor. And so on, i.e., a stepping swirl.

If the stator reversed the flow, it will be an immense angle of attack for the receiving rotor, i.e., the rotor will stall. So, a stepping swirl makes more sense.

While a propeller, an axial compressor, and a turbine are different in what they do, I don't see why the shape of the corkscrew of the propeller I asked about here—would change for any rotating disk carrying airfoil blades— 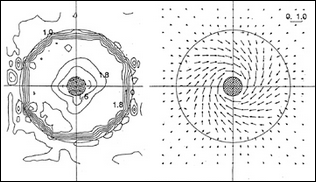 —except in magnitude and thermodynamic properties.

To complement the earlier CFD image, here are two more: 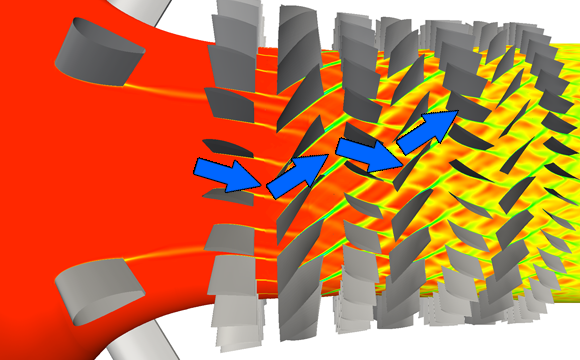 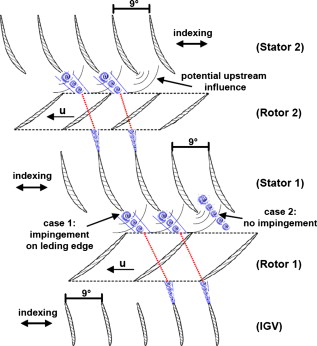 You should do a little bit of research on blade velocity triangles. You'll see that

So if you look at several rows of stator-blade pairs, the air flow will look like a stepped helix. This video has an alright explanation of the theory:

If you want to have a good look inside engines, I recommend the AgentJayZ channel on youtube, he does excellent "show and tell" of components in an engine though doesn't cover all theory very well, for example:

10
Why does the spiraling slipstream from a propeller hit the left side of the fin?
8
How is the central hub / shaft casing of a two-spool jet engine assembled?

20
How are temperature differences handled in a jet engine?
29
Are the fastest moving pieces of a jet engine supersonic?
6
How does the Pratt & Whitney F119 achieve its features?
5
What could cause a low-pressure compressor first stage blade of a turbofan engine to bend forward?
10
Where does turbine vane and blade cooling air come from?
7
Is this an accurate depiction of the internal shape of a turbofan engine?
12
Are centrifugal turbojets easier to make than axial ones?
4
Are turbine and compressor blades and vanes cast or forged?
4
How is a stator like a diverging passage?
3
How do turbofan internals handle the load from the thrust?