Can a pendulum stabilizer for airplanes really work?

Can a pendulum really stabilize a plane for both roll and pitch?

I have read about various experiments (the one in the picture being just a simple case) but I still do not find an example of plane that was stabilised beyond any doubt with the help of a pendulum. 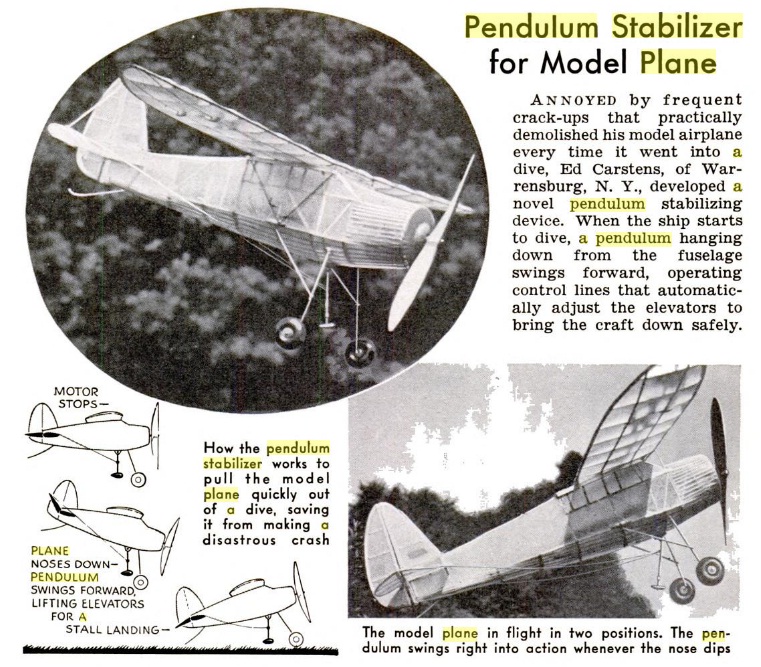 I have found a description (see the attached image) of a Wright stabilizer that was used successfully!! before February 1914. The roll was controlled by a pendulum (letter A in the picture) that swung along the main wings. At one point the article states that the device gave good results being tested daily for long intervals of time.

Another more recent text says that demonstrations were made before the Aero Club judges on December 31, 1913.

How is it possible? 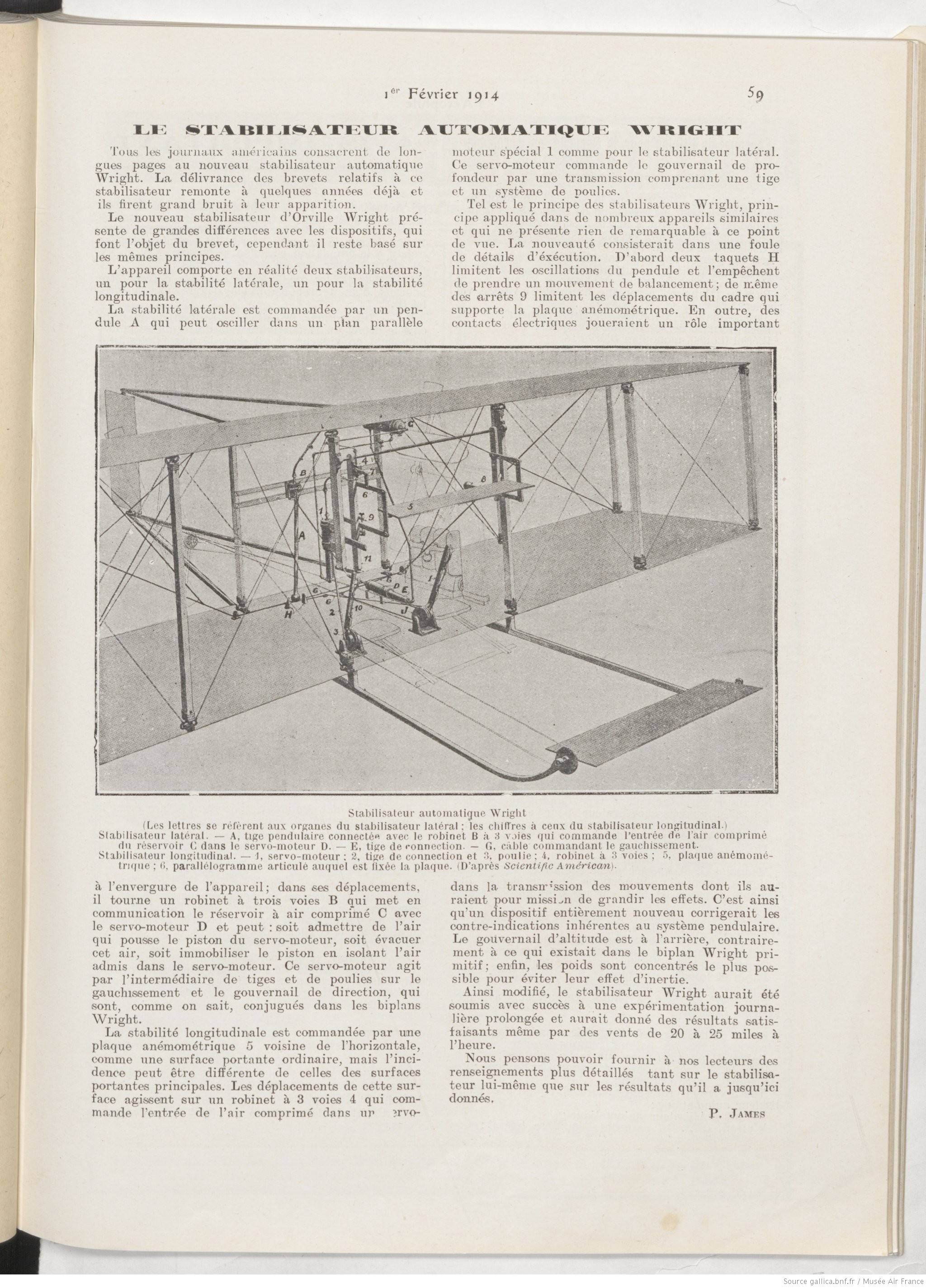 As you noted, a pendulum can only "measure" pitch and roll angles when the pivot point is not accelerating. Except, of course, if the length of the pendulum is the same as the Earth's radius — in which case we have a Schuler Pendulum.

Ed Carsten's pendulum stabilizer attempts to use the same principle as an autopilot measuring roll and pitch angles, and then generating elevator and aileron commands to level the aircraft. But this cannot work when using a pendulum of practical length since the roll and pitch angle "measurements" are in fact combinations of attitude angles and horizontal accelerations.

The Wrights' automatic stabilizer used a pendulum for control of the roll axis only. Control of the pitch axis was based on a vane to sense angle-of-attack. As far as the roll axis is concerned, a pendulum gives the same information as does a slip-skid ball (though a pendulum is less damped and more prone to unwanted oscillations). In general, when an aircraft is banked, it tends to sideslip. In more detail, when an aircraft is banked, the flight path curves and as a result, the outboard wingtip tends to experience more drag than the inboard wingtip, so the nose tends to point toward the outside of the turn, unless the rudder is deflected as needed to prevent this. The resulting sideways airflow over the aircraft creates an aerodynamic sideload that tends to displace a slip-skid ball toward the low wingtip, and likewise a pendulum. So the principle of using a pendulum for roll control is theoretically sound, based on the relationship between bank angle and sideslip. This relationship between bank angle and sideslip is also at the core of why dihedral tends to roll an aircraft towards wings-level-- with no sideslip, dihedral would generate no roll torque regardless of the bank angle.

It would seem that the Wrights could have used a vane to sense sideslip directly instead of a pendulum.

It also would seem that that Wrights' stabilizer system might work best on aircraft with counter-rotating propellers, where confounding factors such as p-factor are eliminated. However the stabilizer system was in fact initially demonstrated to the public on Wright Model E with a single propeller-- see http://wrightstories.com/wrights-develop-automatic-stabilizer/

The relationship between bank angle and sideslip is subtle enough that neither a pendulum nor a slip-skid ball--or for that matter, a yaw string or other sideslip sensor-- would make a practical cloud-flying aid, even speaking strictly in regard to the roll axis alone, except perhaps in the most absolutely ideal conditions. In very smooth air it might be possible to get some meaningful information from a slip-skid ball or pendulum or yaw string while flying blind if the pilot uses certain unconventional control inputs-- perhaps best results might be obtained by limiting the aileron deflections to extremely small angles, while leaving the rudder centered. Other similar variations on the same theme come to mind as well. This is not something that can be recommended as a practical technique in the real world.

Note that any system of blind flying that uses the slip-skid ball in combination with one or more gyro instruments operates on completely different principles than are described above, even if-- as in the obsolete and confusing "1-2-3" system of blind flying-- the pilot is instructed to use the ball as the primary guide to his aileron inputs. See Langewiesche's "Stick and Rudder" for commentary on this antique method of blind flying.

If the pivot (suspension point) of a pendulum is inside a plane, for example in the ceiling of the cockpit, it does not matter were, it will have a random acceleration and in consequence it will move like in the animation you can see below. The demonstration can be found here. The pendulum never aligns to the vertical and so it is useless as a reference able to indicate which way is down.

A pendulum could be used to sense (average) pitch. Dampening would be required to avoid oscillations. But then, what would be the point? I understand that the objective was a safe angle of attack. A simple preset of the elevator would perfectly achieve that.

The pendulum cannot work for roll. A banked plane will follow a curve. The sum of forces will remain perpendicular to the wings. Only changes in the roll rate will affect the pendulum, which is not useful for a simple mechanical control setup. (Imagine sitting in an airliner, far away from a window. You can feel the start and the end of the roll, but not the roll itself)

No, a pendulum wouldn't work, mostly because it would be too sensitive to spurious accelerations. Imagine a system like that in turbulence, the pendulum would start swinging around and would create unpredictable control inputs which would need to be damped out by the pilots.

Mechanically, you would need to have a pendulum arm as long as possible, this would take up a lot of space you would rather use for other things like passengers. It would also probably be fairly heavy, reducing useful load.

Lastly, there are much better systems out there. Why would you use a heavy, bulky mechanical pendulum for one axis when these days you can buy an all singing and dancing 3 axis autopilot on a single chip with redundant laser ring gyros, accelerometers and GPS?

7
Can an automatic vane-based stabilizer really work?
1
How does the control-board on small drones govern their flight?