How can this single-prop drone maintain stable (rotating) attitude and position?

The short BBC news item and video The drone designed to fly on one propeller shows the flight of something that looks like quadcopter missing three of its propellors and motors. It continuously rotates around a vertical axis through its center of mass tilted at perhaps 30 degrees, and the single propellor can provide different lateral thrust in different directions by (I assume) quickly modulating its power throughout the rotation cycle.

This seems to be only a demonstration of an interesting effect at this point in time, but I'd like to understand how it can retain both stable position and attitude with only one degree of freedom (speed). Yes the attitude is rotating, but that motion appears constant.

So far I haven't found anything to read about how this can actually work. In the video there is a suggestion that this has been calculated and equations are briefly flashed on the screen.

The work is done at ETH Zurich and the Flying Machines Arena.

How can this single-prop drone maintain stable (rotating) attitude and position?

I'm also curious if this is a 'new' effect, or is this a version of something that has been previously demonstrated or at least discussed.

above: GIF made from screenshots of BBC video found here. 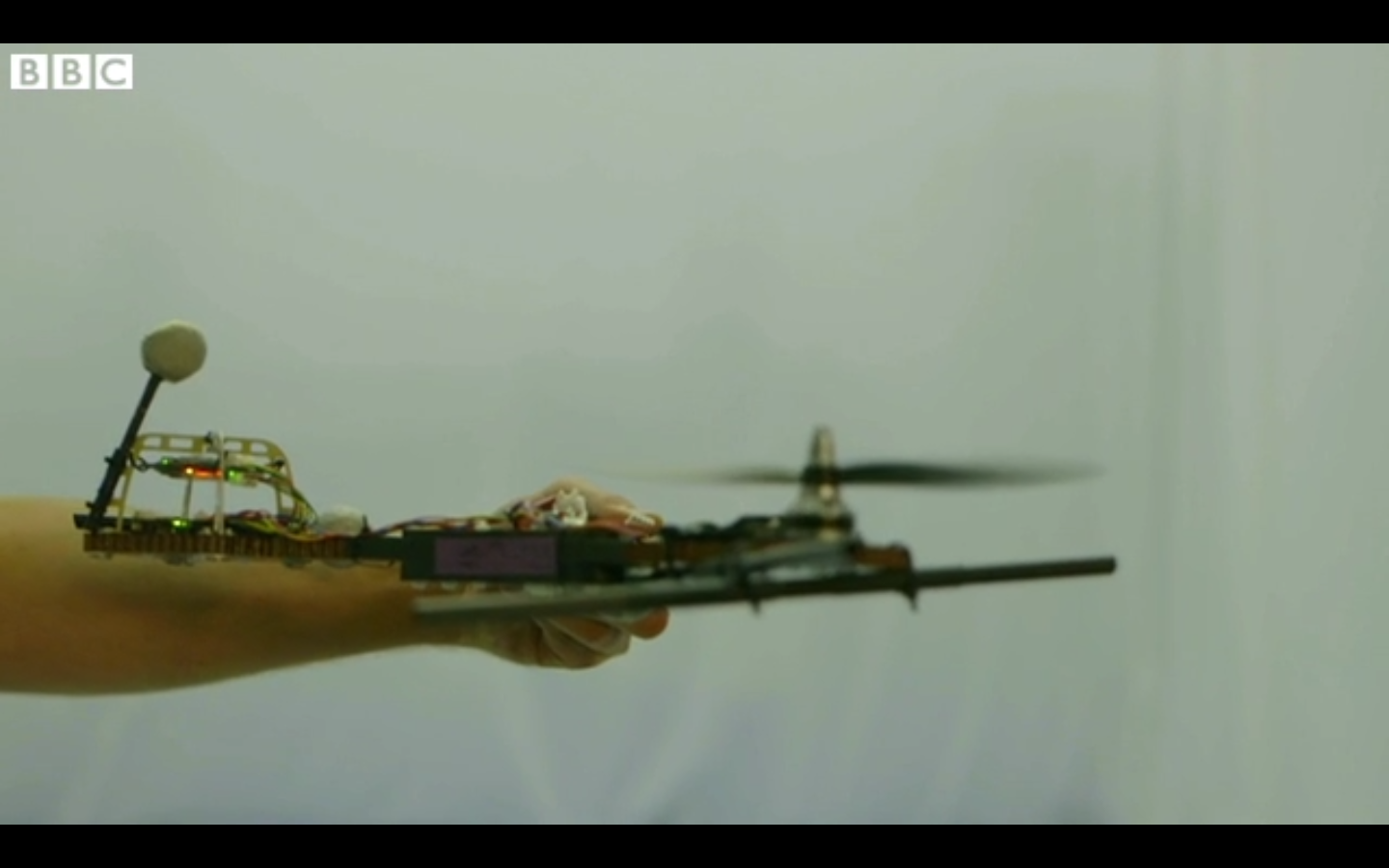 First, the parameter space (so, location of propeller, mass, etc) was searched for a relatively stable solution.

Then, stability is achieve through active control, so indeed by varying propeller thrust rapidly. This is done in a few cascaded control loops; so an 'outer loop' that has a position setpoint, which is then translated to a desired attitude. This attitude is then achieved by varying thrust throughout the rotation.

Not the answer you're looking for? Browse other questions tagged stability performance-calculation quadcopter or ask your own question.

2
How to calculate optimal prop diameter, pitch, torque and power coefficient given required thrust?
7
What happens if the gust alleviation system on an A380 fails?
8
What prevents BFS from becoming unstable when pitching from horizontal to vertical?
8
What are the failure mode(s) for flying cars in case of power loss?
5
How can an up-lifting tail have normal force direction and gradient when generating UP force?
0
How do fighter jets stop pitching motion after a elevator deflection?
1
Can a helicopter be stable without moving the control inputs?