Is an ultralight aircraft allowed to fly near Class B airspace?

May an ultralight vehicle operating under FAR part 103 operate within Class G and E airspace while within the mode C veil surrounding a Class B airport?

Part 103 addresses airspace in this way 103.17 Operations in certain airspace

Where can I find a restriction that applies to ultralight operation within the mode C veil but still in Class E or G airspace?

Yes, an ultralight aircraft operated under 14 CFR 103 can be operated within the "Mode C Veil" within the limitations of §103.

As you note, 14 CFR 91—including §91.215, ATC transponder and altitude reporting equipment and use—does not apply to ultralights governed by §103.

No person may operate an ultralight vehicle over any congested area of a city, town, or settlement, or over any open air assembly of persons.

§103.17 Operations in certain airspace.
No person may operate an ultralight vehicle within Class A, Class B, Class C, or Class D airspace or within the lateral boundaries of the surface area of Class E airspace designated for an airport unless that person has prior authorization from the ATC facility having jurisdiction over that airspace.

Let's look at an example, the MSP Class B area: 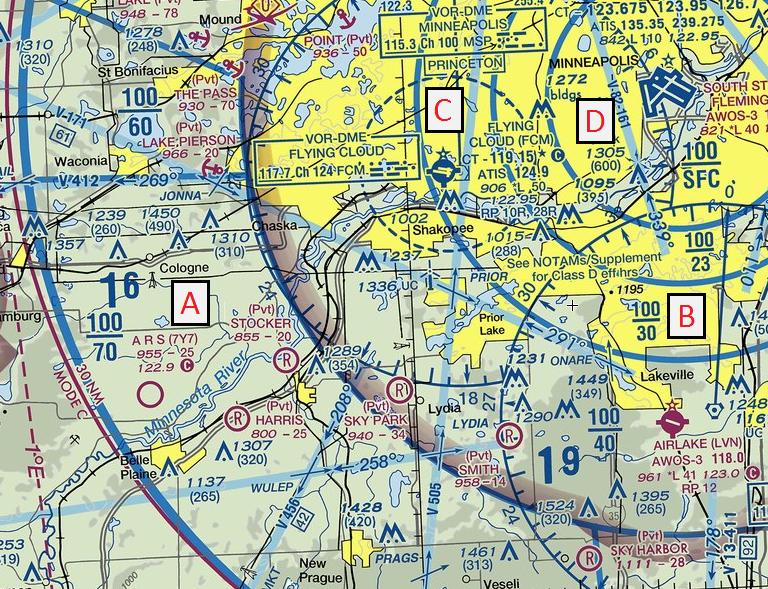 For what it is worth, I have personally witnessed ultralight type aircraft flying in the area of Point A.

You can fly through the mode C Veil but you need to contact the control facility first. I would consider no transponder the same as an inoperative one.

For flying into a Mode C veil without an operable transponder, the pilot needs to telephone the appropriate radar facility for the Class B airspace and ask for permission to make the flight. Upon agreeing to conditions (including direction of flight and altitude), the pilot will be given a code number that he will mention to the controller upon initial radio contact. This is the same procedure that a pilot with an inoperative transponder/encoder would use to fly in or out of the Mode C-veil airports for avionics repair.

You were previously allowed to operate in the Veil with out a transponder but the FAA has since changed its ruling on that.

The FAA on January 13 withdrew the "Mode C Veil Exemption" (SFAR No. 62), which permits aircraft without altitude encoding transponders to operate out of specified satellite airports within 30 nm of a Class B airspace primary airport. It's not yet known if the FAA is going to start immediately enforcing the provisions of FAR 91.215, requiring all electrically equipped aircraft to have Mode C transponders when operating within a Mode C veil.

You can find more here.

Since the question has been expanded a bit ill add to my answer. Keep in mind im no lawyer and this is simply my advice. Your best bet for this one is to call your local FSDO and get an official answer from the FAA. Since 103 does not explicitly cover this case, in reality if you were to be in breach of it (or the FAA thinks you are) they may reference the precedent set by part 91 on the matter even though there is no explicit rule in part 103.

Let's make it simple if your ultra light does not have an electrical system like an alternator or generator you did not have to have a transponder. If you're flying into a mode C Veil The only reason why there is a mode C Veil is because there's going to be a class Bravo airport in the middle of it.

Obviously you have to stay out of class Bravo airspace. One of the examples previous to my post there was a listing for Zone B and Zone C, you could fly in that area as long as you remained under the class Bravo Shelf! You might be flying under part 103 but the rules of far 91 and 61 still apply to you.

If you're flying under part 103 which means you're doing a VFR flight that means you do not have to have communications which means obviously you would not be able to call the controller to request a deviation. Nor could you provide any radio discreet code given to you. You would not need to do that because one you're not answering their class Bravo airspace that they're controlling and two part 91 specifically exempts you from requiring to have a transponder since you have no electrical driven system.

So yes you can fly in the mode C Veil, as long as you stay out of the class Bravo airspace, with no transponder ( as long as you have no electrical system) and you need not call anyone.

Additionally the air map above is not considered a congested area simply because it's yellow. The purpose of the yellow on an air chart is for when you're flying at night to help you identify a congested area that would be illuminated with a lot of lights. It does not necessary mean it's congested and you can't fly above that area for example if you flew above a railroad track going through a major city the railroad track would not be congested with people.

Not the answer you're looking for? Browse other questions tagged faa-regulations general-aviation airspace ultralight class-b-airspace or ask your own question.

2
What airspace are ultralight pilots allowed to use?
16
What is meant by a “congested area of a city/town/settlement” in FAR 103?
12
Which parts of class E airspace can an ultralight (part 103) fly in without prior ATC authorization?

12
Which parts of class E airspace can an ultralight (part 103) fly in without prior ATC authorization?
4
Does FAR 91.155c apply to class E surface extensions?
5
Is a mode C transponder required underneath Class C airspace?
4
May the Class-E-to-surface airspace near Eagle County Regional airport (KEGE) and Marshall AAF (KFRI) be ignored when the tower is open?
0
May an ultralight vehicle pass directly above KEGE at 9200 MSL at 1600Z with no prior authorization without violating FAR 103.17?
0
FAR 91.215— may an aircraft with no electrical system and no transponder overfly Wheeler AAF at 9500' MSL?
0
At what altitude, if any, may an ultralight overfly the Gallup airport (KGUP) with no prior authorization without violating FAR 103.17?
2
What indication has the FAA given that phrases like “surface area of Class E airspace designated for an airport” do or don't include E4 “extensions”?
5
How do I obtain permission to fly in surface class E airspace under FAR-103?
1
Why does CFR §91.215 part (b) list specific areas for transponder operations?