How can the required wing area for climb be calculated, given aspect ratio? 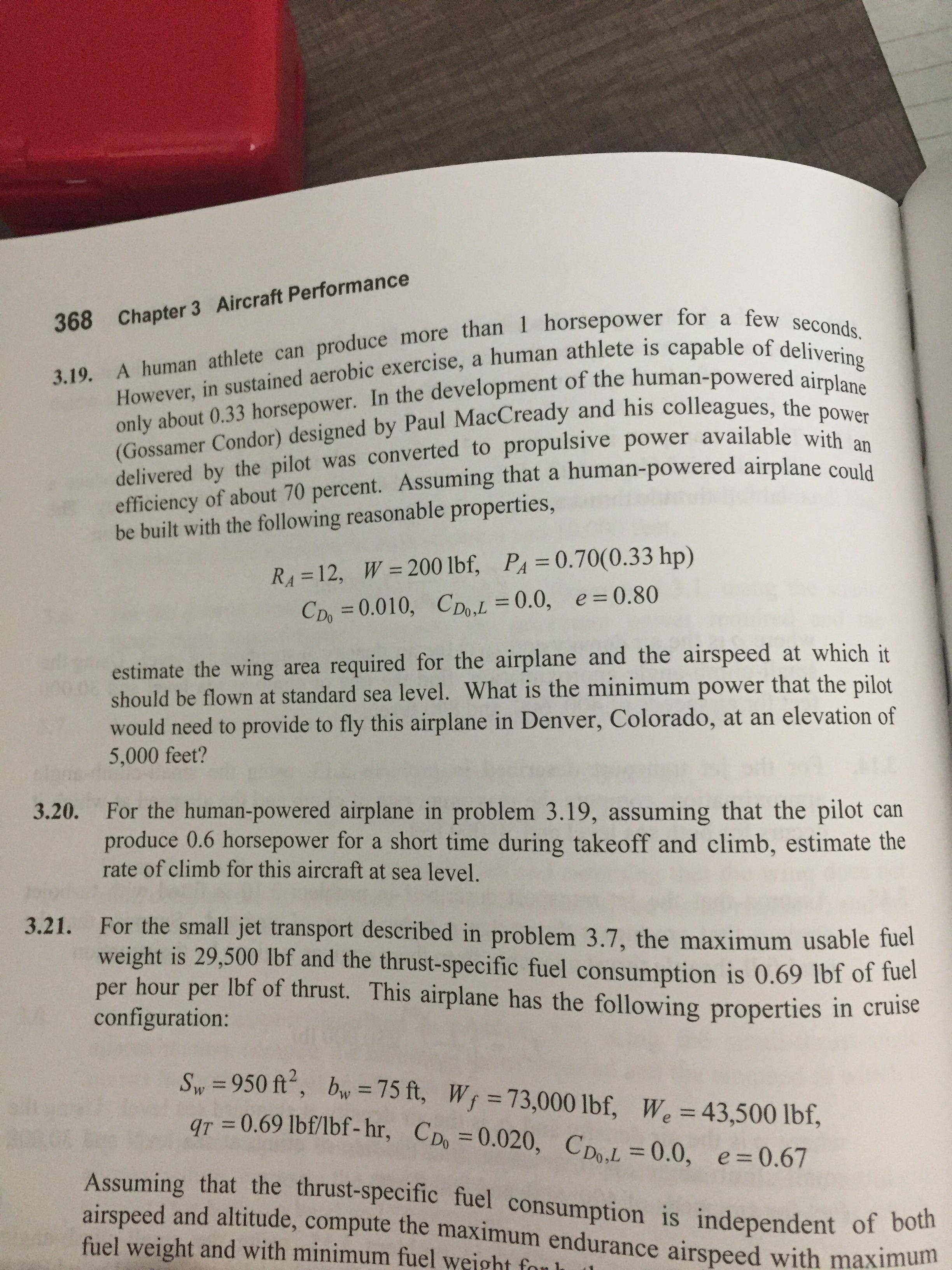 I'm currently working on problem 3.20 from the picture above. In order to find the rate of climb, I'm using the formula Rate of Climb= (Power available - power required)/weight. Doing this, I need to find the power required, which the formula I'm using is Pr=sqrt((2*W^3*Cd^2)/(densitywing areaCl^2)). Now I have everything but the wing area needed for this climb. Given the aspect ratio of 12 and a Cd of .01, how do I calculate this. Also, please let me know if there is a simpler way of going about this problem. Thanks

Let's start with 3.19, since you need the result for 3.20. The parameters given suggest that we should calculate drag $D$ with the parabolic formula $$D = \frac{\rho}{2}\cdot v^2\cdot S\cdot\left(c_{D0} + \frac{c_L^2}{\pi\cdot AR\cdot e} \right)$$ I haven't seen the symbol $R_A$ before, but its magnitude suggests it is the aspect ratio (normally $AR$ in the US, $\Lambda$ elsewhere). Since the whole is an optimisation problem (we look for flight with minimum power consumption), we can determine the lift coefficient $c_L$ already. For propeller aircraft the point of minimum power is when the lift coefficient is $$c_L = \sqrt{3 \cdot \pi \cdot AR \cdot e\cdot c_{D0}}$$ Hey, you know all terms already! This allows you to proceed to the wing area once the needed lift is known. My next heroic assumption is that $W$ actually denotes a mass (the unit seems to say it is pound-force). The power plant should weigh 100 - 150 lbs already, so 200 lbs for the whole aircraft seems reasonable. So you can proceed: $$L = 200 lbs \cdot g = \frac{\rho}{2}\cdot v^2\cdot S\cdot c_L$$ Plug in what we know, use sea level density ($\rho = 1.225 \frac{kg}{m^3}$) and the previously calculated lift coefficient: $$S\cdot v^2 = 1527 \frac{m^4}{s^2}$$ This gives you pairs of wing area and speed squared which together fulfil the requirement. Some pairs, though, make more sense than others. Generally, the biggest wing will need the lowest power but will become increasingly fragile as wing area increases.

Solving this for Denver, CO and finding the climb speed with 0.6 HP of power should be easy now. Just calculate the SEP and you know the climb speed.

I believe what you are missing here is the fact that this kind of an aircraft would cruse at best $L/D$ ratio.

21
What is the difference between Best Rate of Climb and Maximum Rate of Climb?
8
Does an accelerating airplane also start climbing?

4
How can I calculate the drag coefficient for a given wing design?
2
How does the thickness of a wing affect its aspect ratio?
2
How can the zero-lift drag coefficient (parasitic drag) be calculated?
5
How to calculate required thrust for take-off knowing gross weight and L/D?
5
In xflr5,how is the value of Fz calculated?
3
Does a rotating control surface change the wing area?
5
How to calculate the power required during transition from VTOL to fixed wing?
1
Tapered Wing Providing low Coefficient of Lift
0
Design lift coefficient of an airfoil