When/where must a flight go missed on the JFK VOR/GPS 13 L/R approach?

I'm looking at "exciting" approach plates, and I always come back to JFK VOR/GPS 13L/R. 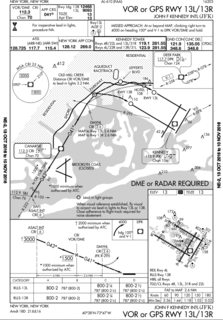 I think I have come to understand most of the elements of this unusual approach, and enjoy seeing flights make that "dramatic" right turn just before landing, but here is what I can't figure out, even after reading over the plate multiple times:

With such a long distance (relatively) from the MAP to the runway, and additional features such as lead-in lights involved, when and where should the pilot consider, or decide, to break off the approach and go missed (climb and head for DPK)? Upon crossing the MAP, is it sufficient to have the ground and/or first set of lead-in lights in sight? Should the pilot see more than that, such as the actual runway? If weather temporarily (about 3 to 5 seconds) blocks off the view of the ground or lead-in lights can he continue? Basically, what is the minimum criteria for being able to continue the approach, after the MAP? Must the runway be in sight at all times, or is knowledge of position (based on lead-in lights, etc.) enough?

This approach is different than most others, in that it has a fly visual section of the approach, as noted in the lower portion of the plan view:

When visual reference established, fly visual to airport via lead-in lights to Rwy 13L or 13R.

When flying the approach, the pilot must have visual contact with the ground, and be able to maintain visual flight by reference to the ground. Arriving at DMYHL, the flight visibility must be at least two miles, and there must be at least an 800-foot ceiling. Considering that DMYHL is either 2.6 or 3.6 NM from the landing runway, it's entirely legal to continue flight without the runway in sight. Without ground contact and the required visibility and ceiling, a missed approach must be executed at DMYHL.

After passing DMYHL, any time the pilot loses visual contact with the ground, or is unable to fly the Fly Visual path as charted (if, for instance, they could see the ground near them but not the lead-in lights) they must execute the missed approach at that time. Note that continuous ground contact must exist - the lead-in lights could disappear behind a small cloud for 3-5 seconds if the pilots still had the approach path in sight, but the aircraft would not be permitted to enter a cloud after the MAP.

2. Missed approach obstacle clearance is assured only if the missed approach is commenced at the published MAP. Before initiating an IAP that contains a “Fly Visual to Airport” segment, the pilot should have preplanned climb out options based on aircraft performance and terrain features. Obstacle clearance is the responsibility of the pilot when the approach is continued beyond the MAP.

NOTE− The FAA Administrator retains the authority to approve instrument approach procedures where the pilot may not necessarily have one of the visual references specified in 14 CFR §91.175 and related rules. It is not a function of procedure design to ensure compliance with §91.175. The annotation “Fly Visual to Airport” provides relief from §91.175 requirements that the pilot have distinctly visible and identifiable visual references prior to descent below MDA/DA.

Your MAP is going to be DMYHL waypoint at 2.6NM DME/GPS from Canarsie VOR-DME (CRI) on the CRI 041° radial. It is also defined at the intersection between CRI 041° radial and Kennedy VOR-DME (JFK) 295° radial.

Also see the upper right corner of the plate:

I suspect the unusual configuarion is due to traffic congestion for approaches and departures on those parallel runways to expidite the flow of traffic trying to fly a non precision approach - but don't quote me on that!

15
Are you required to have constant view of the runway when circling?
12
What counts as “runway in sight” when flying an IFR approach to minimums?

12
How do pilots estimate glideslope visually without PAPIs?
12
What counts as “runway in sight” when flying an IFR approach to minimums?
5
When would these two fixes at KMEM be used?
9
When should I start turning in this circling approach?
3
What is acceptable visual cue at Decision Height when performing CAT II approach?
6
Does having lead-in lights in sight allow descent below MDA?
5
Why wouldn't KJFK offer the ILS for 22L?
9
What prevents the use of a multi-segment ILS for non-straight approaches?
1
Why do pilot and GPWS approach callouts say “minimums” instead of “minima”?