How does a vertically higher center of gravity affect handling?

Much of the discussion of the center of gravity of the aircraft is focused on the longitudinal axis, i.e. front and back. How does the vertical position of the CG affects the handling characteristics?

For example, the Boeing Dreamlifter and the Airbus A300-600ST both have their cargo stored in the upper portion of the airframe. Are these aircraft easier to "flip over"?

As long as flight is coordinated, the vertical position of the center of gravity (cg) is of minor importance. It will show in issues like thrust changes, when acceleration will cause higher trim changes because of the increased lever arm between the inertial forces and the thrust forces.

This will only change when flight is no longer coordinated and the aircraft sideslips. Now the big cargo volume is more important than the cg location because it will contribute a considerable side force. Also, it will need additional means of lateral stabilisation because the big fairing will destabilise the aircraft in yaw. Still, the lever arm between the cg and the lift force vector will be much, much smaller than the lever arm of the ailerons, and a little aileron deflection will be enough to stabilise the aircraft.

Maneuvering will look funny to crews used to fly the unmodified version of the same airplane, because now a roll manoeuver will induce a lateral motion at the location of the cockpit which was not there before. Same goes for eigenmodes like the Dutch roll which will be more noticeable for the crew because their cockpit sways laterally.

"Flipping over" needs deliberate commands from the pilot; this is no different in aircraft with unusual vertical cg positions. The most extreme is probably the VM-T "Atlant" version of the Russian M-4 Molot bomber. 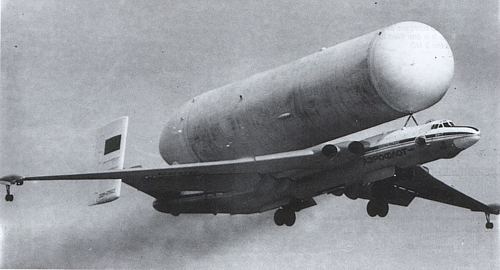 Most airplane designs take advantage of the CG vertical offset wrt the center of lift to help auto pitch the plane with overall configuration of wings and elevators and engine's thrust.

You get auto pitch up when you add to thrust of engines and vice versa you get nose down by reducing power. Im emergencies this is the only last resort of controlling the pitch. An easy way of imagining this is to think of the plane as hanging from a long string: add more power it pitches up; reduce power it pitches down.

Each plane design has a manufacturer's design volume inside which CG will create acceptable moment arm to safely control the plane and fly it. Many crashes have happened because of violating this limitation. In Cargo planes there are loading charts and anchors prescribing where and how to lock in tall loads or how to distribute loads in cargo space.

Handling of a plane with higher CG requires more carful control of coordinated flight to prevent potential wild banks or stall of one wing in turns.

0
What is the difference between a forward, aft, high and low center of gravity?