How was flutter mitigated in jets such as the F-15 and F-16?

As I understand it flutter was a serious problem for early jets, like the XF-104. Flutter can affect any of the extended members of an aircraft during high-speed flight, including the wings and the vertical stabilizer. The problem seems to have solved, however, by the time that the F-16 and F-15 were designed.

Short answer: By not flying faster than the 104 did and adhering to the lessons learned.

Flutter first started to cause crashes in WW I when improved engine power and aerodynamics made a substantial rise in flight speed possible. Every time technological advance allowed higher speeds, flutter became an issue which was then solved both by trial and error and by analytics.

The first recorded flutter incident was on a Handley Page O/400 twin engine biplane bomber in 1916. The flutter mechanism consisted of a coupling of the fuselage torsion mode with an antisymmetric elevator rotation mode.

This was easily fixed by removing one degree of freedom for the elevator: Initially, both sides could be moved independently, and by connecting them with a torsion tube the flutter mode could be avoided.

From control surface flutter in WW I, which was generally solved by the practice of balancing all control surfaces (something the early aircraft designers were oblivious of), flutter problems moved to primary surfaces from 1925 on. Again NACA TM 4720:

The first analytical testing was performed by von Schlippe in 1935 in Germany. He vibrated the aircraft at increasing speeds and measured the resulting amplitude. An increase in amplitude indicated a reduction in damping and imminent danger of flutter. 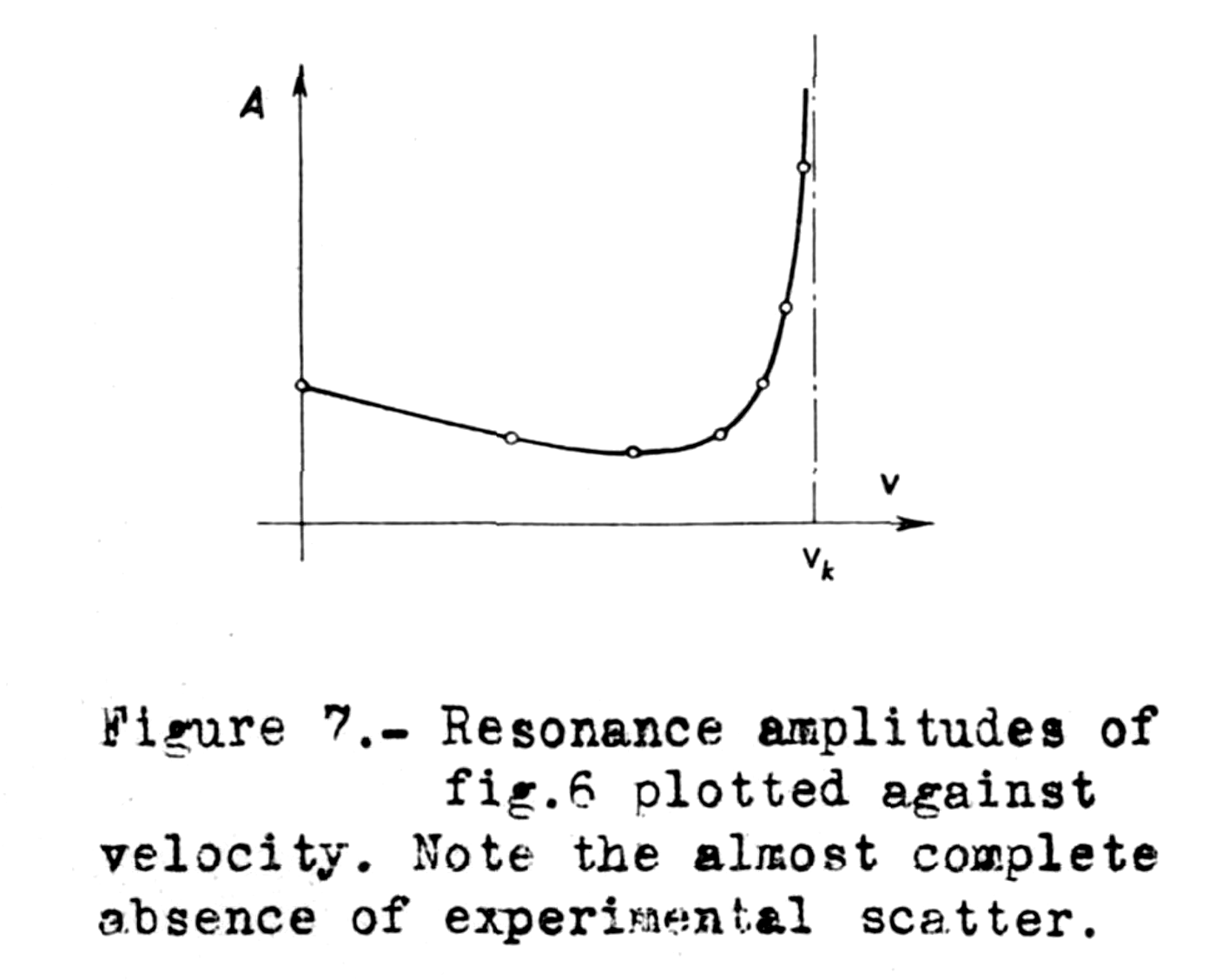 Typical amplitude over speed plot (from NACA TM 806, which is a direct translation of von Schlippe's work which was first published in Luftfahrtforschung Vol. 13 No. 2, February 1936)

Below is a diagram (taken from NACA TM 4720) depicting the flutter test of the F-14. The F-14 and F-16 went through the same procedure to make sure flutter is no issue in operation. Modern fly-by-wire designs can even use their control surfaces for active flutter suppression. 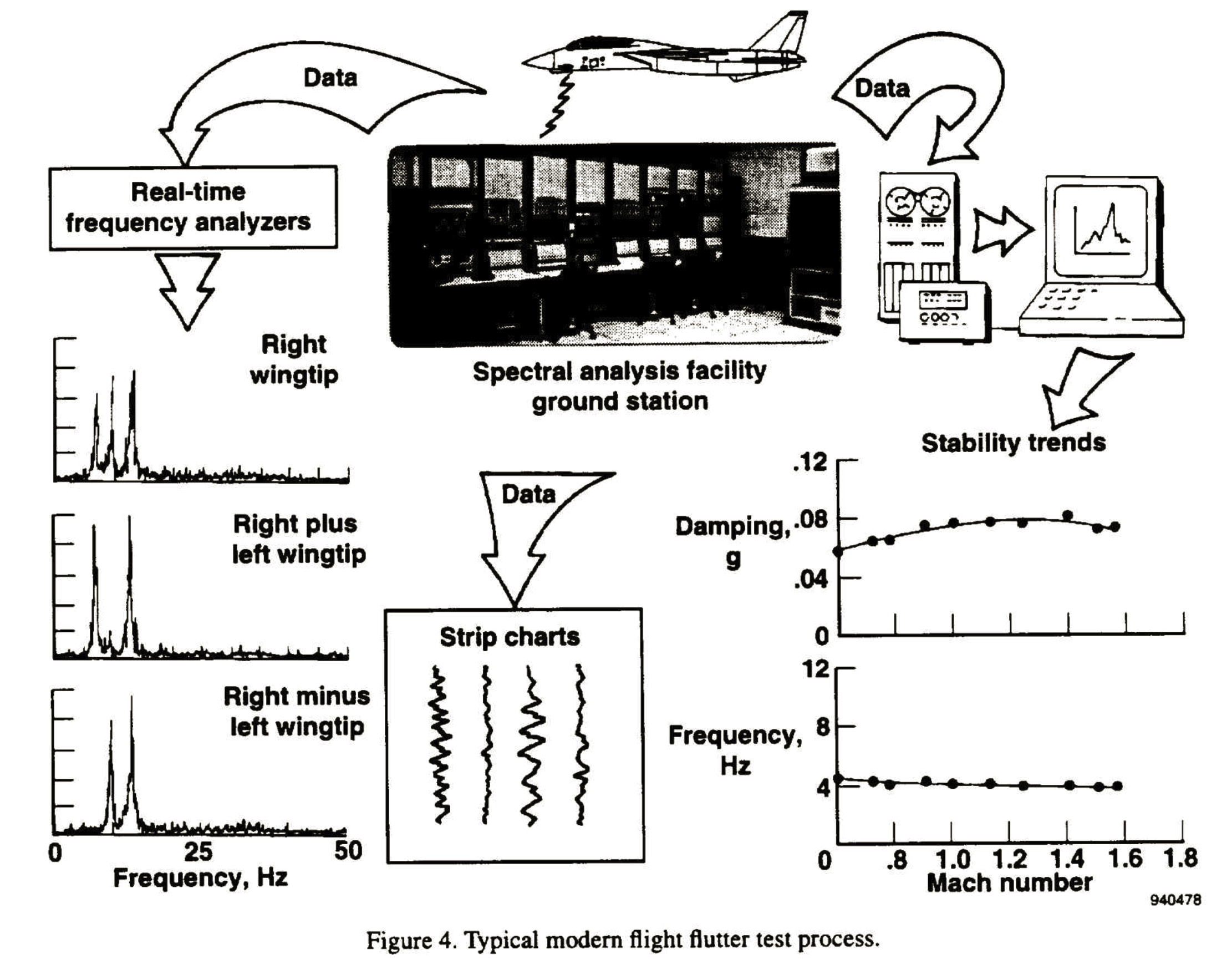 The XF-104 is a prototype aircraft, which lead to the F-104 starfighter. Usually, during the development of an aircraft, flutter testing is carried out and corrective actions are taken. The Wikipedia article you liked has a point:

In a similar manner, during flight testing of F-15 and F-16 (or any other aircraft, for that matter), various modes of flutter are identified and corrective actions are taken. For example, in case of F-15, flutter in the empennage was observed during tests, which was corrected by redesigning the stabilator (by introducing a 'snag'). 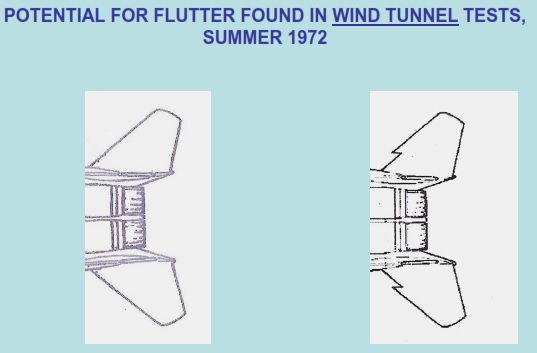 F-15 stabilator design changes due to flutter; image from airandspacemuseum.org

Some modifications were also carried out on the vertical tail (by increasing stiffness). So basically, the answer is the flutter modes are (hopefully) identified during the test program of the aircraft and appropriate corrective measures taken.

After the flutter testing and identification of the aircraft envelope prone to fluttering, after stiffening of the aircraft wings and rudder (s) stabilators, etc... the another way was to prohibited maneuvers in that region of the flight (rolling under the hard G's and supersonic speeds). F 15 rudders are not that tall just for that reason

Not the answer you're looking for? Browse other questions tagged aircraft-design fighter f-16 flutter f-15 or ask your own question.

11
How are aircraft wings protected against flutter - aerodynamic oscillations that can break bridges?
12
What is the difference between buffeting and fluttering?
7
What is the purpose of flutter testing?
9
How can engine positioning affect flutter tendency?
3
Does every control surface need to have a counterweight?
1
What determines the maximum speeds for a particular aircraft?
3
Can horizontal stabilizer trim be worked independently (each side)?
2
Combating flutter with mass distribution?
1
Do aircraft designers gather real data to confirm their design (CFD, wind tunnel) data?

53
Why are fighter pilots seated and not reclined?
9
If no low-speed compromises were made, what would an ideal Mach-3 wing look like?
23
Would it be feasible to build a jet fighter plane based on a wooden construction?
10
Why do the C-141 and C-5 have T-tails?
5
Why are many early gliders high-wing designs as opposed to newer designs?
16
For airliners, what prevents wing strikes on landing in bad weather?
1
Why was the Electra uniquely vulnerable to whirl-mode flutter?
7
Can an F-16 land on an aircraft carrier, at all?
4
What would be the advantage of a Puller vs. Pusher configuration on Embraer's new Turboprop?