How can one fly a stabilized approach when the final approach path is curved?

Some approaches, like the KMTN VOR/DME RWY15 depicted below, have a final approach segment that is curved (in the case below, the entire leg from FAF to RWY is one big DME arc, but this could also happen in RNAV approaches using Radius-to-Fix instead). However, it is said that one cannot be in a turn in order for an approach to be considered "stabilized" (this is most often stated in the context of circling approaches, but is still applicable for straight-ins of course). What does one do when stuck with an approach that cannot be flown within stabilized approach criteria? 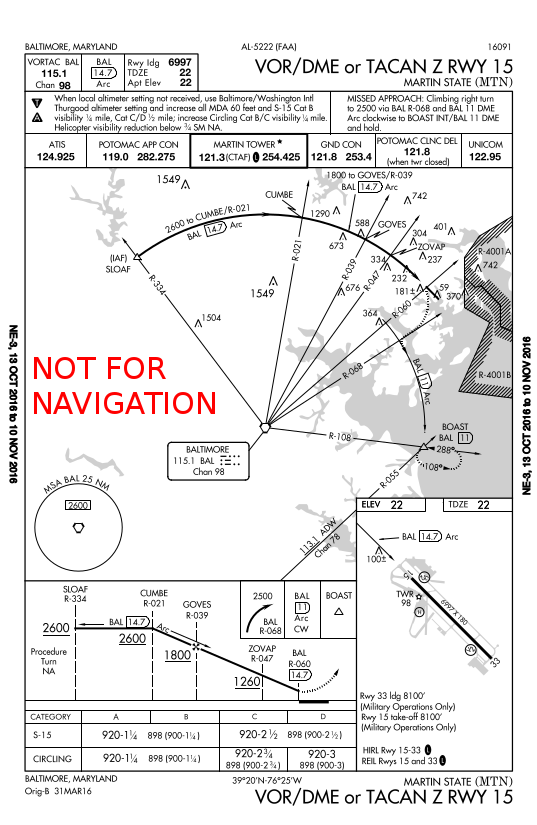 Perhaps my thinking is now considered outmoded (retired in 1999), but for me the definition of a stabilized approach doesn't preclude turning, but only that the turning (when necessary) is accomplished at a stabilized rate. The idea was to be setup in landing configuration, at your stabilized final approach speed, sink rate, and power and tracking whatever the approach path is from the FAF down to the landing flare.

For tracking DME arcs, we were taught to find that angle of bank that (given our final approach speed) produced the desired turn rate. We would hold that bank, just as we would hold wings level for a straight final approach path.

It may be easier to think of a DME arc as a polygon rather than a circle.

Most of the time would be flown wings level, and with a 14.7 mile arc, there would be a lot of room for correction. So I would say this would be like any other approach except that the final approach course just isn't a straight line.

As far as missed approaches go, once your turn exceeds runway heading at the correct distance of 14.7 miles one would execute.

One thing I do find interesting however: normally once a pilot reaches full needle deflection on the primary navigation instrument they would execute the missed approach. A DME arc follows different rules, so I would be curious what the limits would be with a DME reading as a course guide. +/- .5 miles or something along those lines?

Not the answer you're looking for? Browse other questions tagged approach iaps or ask your own question.

13
When flying a circling approach, is it permitted to begin the visual circling segment prior to the final approach fix?
15
Can I circle to a different runway if cleared for an instrument approach without circling minimums?
4
What are ATC's considerations when they instruct to intercept final approach course instead of simply clearing for approach?
1
How does one tell whether a corkscrew approach is stabilized or not?
7
How should one fly the entry procedure to an approach when the hold is not aligned with the outbound course?
2
KSEE LOC-D conundrum
4
Why does GBAS broadcast Final Approach Segment data when SBAS does not?
24
Why don't flights fly towards their landing approach path sooner?
4
When can I proceed inbound in a hold in lieu of a procedure turn when cleared for the approach?
9
ILS Approach, when can you descend on the glide path?