How does the efficiency of a piston aircraft change with altitude?

Turbine aircraft are more fuel-efficient, per mile, the higher they fly and this is for two reasons:

Now both effects should also apply to piston-engined aircraft. Plus

So I would expect piston aircraft to also fly as high as possible, and most piston aircraft should have no problem to get to at least 10,000 ft (where supplemental oxygen is not needed yet). But in various stories and documents I notice even long flights are often made much lower. Below 5,000 ft.

So is there actually some reason why piston-powered aircraft would be more efficient at lower altitudes? Or any other reason to prefer flying low?

You are right, flying higher will be more efficient. However, the inverse relation between thrust and speed in propeller aircraft means that the available speed range is much smaller, and thus the possible altitudes are more restricted. Simply put, the possible gains are smaller.

If you look at the thermodynamic cycle of a turbo-compound engine, it looks almost like that of a jet. Still, the high bypass ratio translates into a lower optimum flight speed and the lower power-to-weight ratio usual for piston aircraft limits the maximum altitude and makes them more susceptible to adverse winds. Also, turbo-supercharging, which is much more efficient that supercharging, was developed to a practical solution only a few years before gas turbines were introduced, so pre-WW II piston engines relied on the less efficient supercharger for boosting power, reducing the benefit from flying higher yet again.

Why historic flights were performed at lower altitudes has probably more to do with the low ceiling of the initially heavy airplane and the lack of supercharging than with a deliberate choice by the crew. Maybe the lack of cabin heating or de-icing equipment, or even an open cockpit, made lower, warmer altitudes also preferable. Another reason might be the need for terrestrial navigation in the absence of today's infrastructure of radio beacons and GPS satellites. That flying higher translates into better range was known as early as WW I.

Ron Beyer's comments are good ones. In addition:

There are, for these purposes, two sorts of piston engines: normally aspirated and turbocharged. Normally aspirated engines use ambient air: the air pressure out in the atmosphere is what the engine feels (ignoring flow inefficiencies in the intake system and effects of ram air). Turbocharged engines use an air pump to maintain or increase the air pressure into the engine. A normally aspirated engine's maximum power output decreases as altitude increases: increased altitude yields decreased pressure, and with the nearly-constant proportion of the atmosphere made up by oxygen (21%), the amount of oxygen in the air drops. If the engine is operating at maximum available output and efficiency, if you decrease the oxygen you decrease the fuel, and decreasing both of these will decrease available power, all else being equal.

A turbocharged engine can maintain full sea-level manifold pressure (air pressue at the intake) to altitudes above sea level. How high they do this depends on the specific engine installation: some, only to 10,000', others to over 20,000'. Maintain the air pressure and fuel flow and you maintain the power output.

A turbine engine is, for these purposes, normally aspirated. Altitude goes up, maximum possible power goes down. Many turbine engines are thermodynamically capable of generating more than their rated power (termed "flat rating"), being limited in some other way. These engines can maintain rated power to higher than sea level altitudes. Essentially, this is like running a piston engine at partial power when at sea level—say, 20" of manifold pressure, instead of the normal sea level maximum of 30"—but being able to maintain that power up to perhaps 10,000'.

If you can maintain desired cruise power, true airspeed increases with altitude. It goes up at about 2% per 1,000'. Most of today's piston engines are run between 60% and 75% of maximum power while in cruise, and it turns out that is generally the maximum available from the engine at somewhere between 7,000' and 12,000', depending on the installation. Aircraft with turbocharged engines fly under different constraints.

Take my Mooney 252 as a specific example. The engine is turbocharged (turbo-supercharged, to be more specific: the turbocharger can maintain higher than sea level manifold pressure, and the engine is rated for a maximum of 36" manifold pressure), and I can maintain full power to about 20,000', and a high-speed cruise power setting of 75% to 25,000'. The higher I go, the higher my true airspeed.

There are other considerations besides oxygen, even beyond Ron's note about low level hypoxia, including wind, weather, practicality, and pilot training and comfort.

Wind often increase with altitude. When I fly eastbound (or otherwise with the wind), that's a good thing; when westbound (or into the wind), that might be a bad thing, and higher altitudes might yield LOWER ground speed, because sometimes the wind speed increases with altitude more quickly than my true airspeed.

As to weather, sometimes it's better to fly below the weather than through it, especially when there are embedded scattered or isolated thunderstorms. There's airframe icing to consider. Turbulence might be present at higher altitudes and not at lower.

From a practical standpoint, there might not be net benefit from climbing high, even higher than 5,000'. Or, that benefit is minimal. While climbing, you're flying slowly, more slowly than cruise. You don't gain this back in the descent. You also burn more fuel per mile, which, again, you don't gain back in the descent. For a short flight, maybe it will take more time to climb to 7,500', or to 10,000', than you would save from the increased true (and ground) airspeed.

Acute hypoxia won't be an issue for most people at 10,000', but, as Ron mentioned, flying for 2-3 hours at 10,000' without supplemental oxygen can result in low-level, sub-clinical hypoxia, causing, in some people, headaches, decreased visual acuity (especially at night), and diminished cognitive function.

One other reason to fly low: see the sights!

You define efficiency as fuel consumed per mile, or in other words specific range (available range).

For piston aircraft flying within their design envelope (not trying to beat the jets), the available range does not change with altitude.

[The] maximum available specific range (miles per gallon or pound of fuel) is independent of altitude.

That's the theoretical conclusion, the actual is ±1%, which is close enough to the theoretical. Note the below graph from a POH (a rare graph to find): 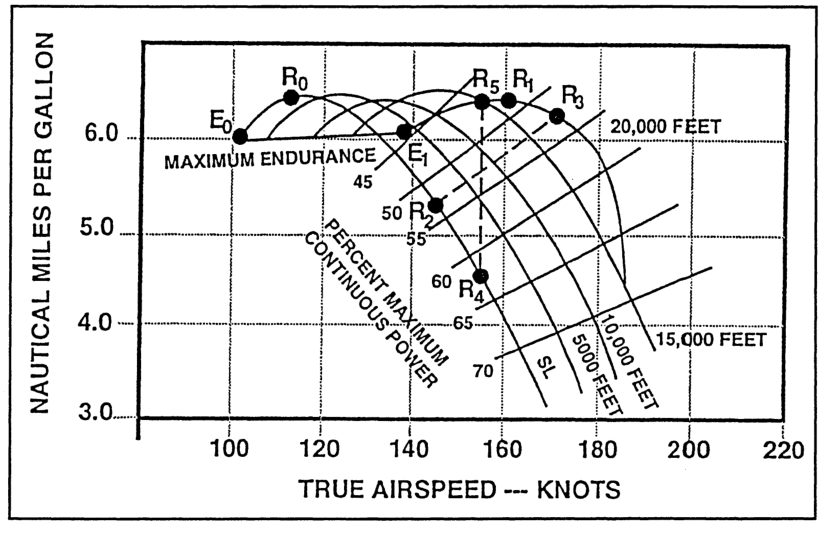 Note R0 and R1, they are the same range, 20,000 feet apart, by using different TAS and power. However, if you maintain the TAS or power, the range improves with altitude because high power, altitude, and TAS favor the shifted L/D curve, see below: 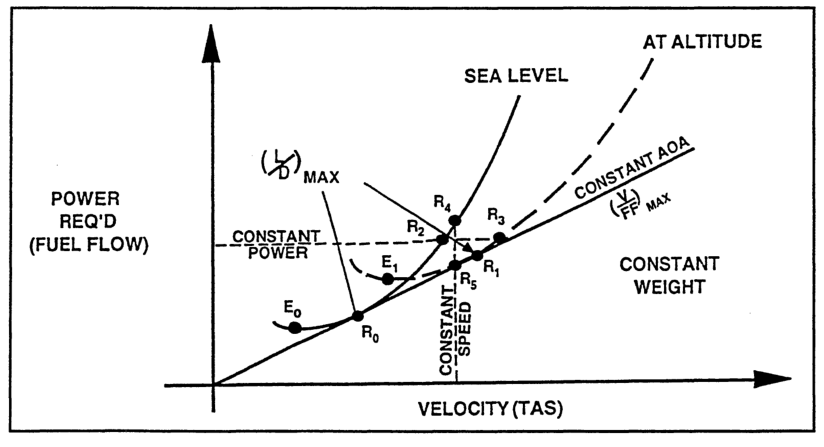 Again R0 and R1 are the same. But for a fixed speed/power, the resultant R is closer to the L/D max than at a lower altitude. Note that any R that is not R0 or R1, is a lesser range and not the maximum available.

If you watched Dunkirk, there were two scenes when staying lower would have saved them fuel. Back then I went back from the cinema and looked into a POH of a similar plane (Bell P-39 Airacobra), and to my surprise, regardless of altitude, maximum available range was fixed. And my conclusion was the difference is in the fuel used during climb.

Which was further confirmed when I came across this Lockheed Constellation Starliner graph (source: Flight): 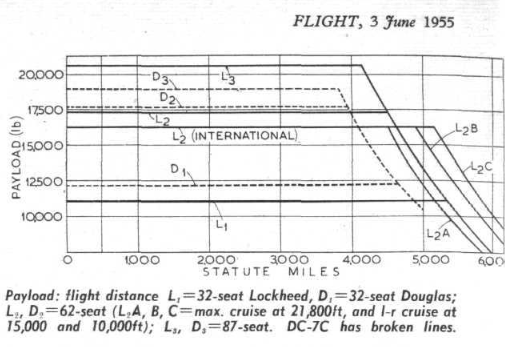 In the DC-7 v L-1649A battle for the Atlantic flights, the Constellation Starliner could achieve better range when flying at 10,000 feet, compared to 15,000 and 21,800 at the same payload. Note that the Starliner had turbo-compound engines. Like the B-29, another factor would be engine cooling in thin air, which requires larger cowl flaps angles that cause more drag.

0
What is the optimal altitude for performance and mileage in normally aspirated GA planes?
18
Why would a B-29 consume more fuel at 17 kft than at 9 kft?
4
Does altitude influence the flight range of an engine driven aircraft?
1
Will increasing the wing area result in higher aircraft range?

5
At a constant power setting, does TAS change with altitude?
7
Does load factor limit actually change with aircraft weight?
14
Why does fuel consumption decrease with increasing aircraft altitude?
17
Why is max endurance different for jet and props?
12
How (and why) does engine thrust change with airspeed?
3
How does maximum speed vary with altitude?
1
Do takeoff (or other) performance calculations for jet aircraft take into account the type of fuel being used?
20
How does turbine efficiency compare with internal combustion engines if all the turbine power is converted to mechanical energy?
1
Why isn't Vy lower than the speeds for best L/D ratio and best glide ratio in an airplane with a piston engine and a variable-speed prop?