Why does IRS alignment take so much time?

Home GPS systems (like your car navigator) is able to locate you in like a few seconds, but 737NG needs to align itself for 6-8 minutes.

Why do navigation systems in aircrafts take so long to align themselves?

The longer time required to align an inertial unit is the price to pay for its independency on any external equipment or signal, but Earth itself, and also it's larger accuracy if we consider a small period of time.

It's slow because Earth rotation produces tiny effects at small time scale, and we haven't found more practical sensors yet. The effects depends on the distance from the rotation axis, larger at the equator than at the poles (thus alignment takes more time at high latitudes).

An IRS provides the position like a GPS receiver,

Gimballed inertial systems principle is simple: Accelerometers are maintained oriented with Earth using a gimballed platform, and all measurements are done in the Earth reference system.

In strapdown inertial systems, accelerometers and (laser/optical) rate gyros are aligned in the aircraft reference system, and measurements are done related to this system. Except this difference, the principles for alignment are quite the same.

Old gimballed inertial are longer to align because gimballed gyroscopes are less precise than fixed laser gyros. For the explanations, let's assume a gimballed stable platform.

The alignment consists of getting the Earth orientation and speed, and inertial unit initial position. After alignment, current speed, attitude and heading will be determined by integrating accelerations and rotation rates and adding the result to the initial values. 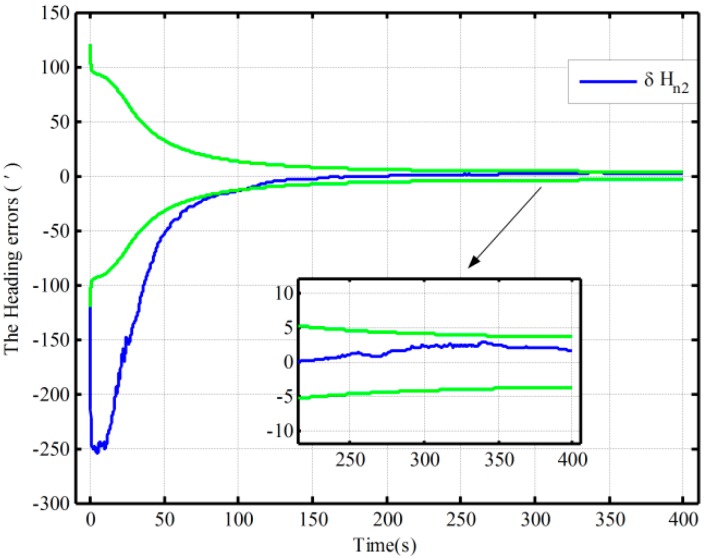 Inertial is a stand alone device, completely independent of any external equipment or man-made signal. It relies only on Earth rotation speed and gravity. That's why it's still used for navigation in spite of existing radio aids and GPS (GPS is actually another radio aid).

One may wonder why inertial systems are still used at the GPS era, in spite of their limited accuracy and long alignment procedure. The main reason is that you cannot blindly rely on GPS constellation availability. Let's list some of the possible failures.

GPS is the US solution for satellite positioning or GNSS. While defense organizations can obtain credits for different reasons, the difficulty to set up a civilian GNSS has been striking with the numerous delays encountered building Galileo, the European GNSS. It needs to design, launch and maintain the satellite constellation (more than 20 satellites are required for accuracy and availability). The constellation must be permanently monitored and controlled from ground stations all over the World.

GNSS signal can be perturbed by natural phenomena: Sun activity, weather and volcanic ashes may partially or totally block radio signal, reducing accuracy and availability. If the GNSS constellation fails, no precise GNSS receiver can work:

Dependency on the US DoD and military conflicts

The GPS is a US military system. Agreements have be signed between DoD and civilian organizations for a civilian exploitation of the GPS constellation. This gives worldwide aviation some acceptable guarantees about GPS signal access.

However GPS is still vulnerable to jamming by opponents. In theory it is also sufficient to destroy the four ground control antennas to make GPS receivers useless after a few weeks. 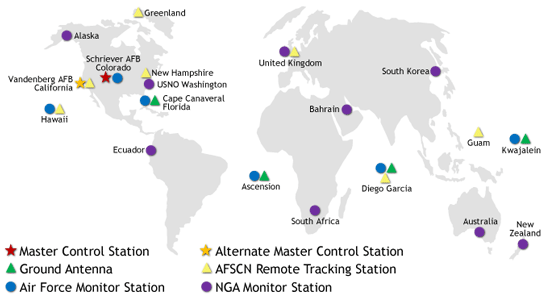 GPS is not always accurate and available.

GPS availability and accuracy is given by an indicator: dilution of precision or DOP. The larger the DOP, the less accurate the system. Accuracy is significantly degraded for a DOP larger than 3

It's worth remembering that, even without any of the problems previously listed, a maximum DOP value is not guaranteed, or even feasible, in polar regions, and is only guaranteed for 95% of the time in other regions. That was a design principle retained since the beginning, to limit the number of satellites in the space segment.

Obviously radio signals are not received underground (tunnels), underwater (submarines), and can be significantly weakened by foliage, to the point GPS is difficult to use in tall and dense forests.

When GPS is only temporary unavailable, inertial solutions can be used to maintain some position determination capability until the GPS signal is reacquired. This is very often used in car navigation systems to deal with tunnels and tall buildings. The inertial unit is a small (and very low precision) MEMS contained in the GPS receiver case or the smartphone.

Finally, let's rethink about the statement that GPS fix is nearly immediate.

That's true as long as the receiver is already aware of where the satellites are located. The constellation periodically broadcast the orbital parameters (navigation message containing almanacs, ephemeris and time corrections) for each satellite. This takes 13 minutes to get the almanacs required for a coarse positioning, at the slow rate used.

If the receiver has not yet the almanacs, or they have been cleared, then 13 minutes are required before the first fix can be done (and 13 additional minutes if the reception is interrupted while receiving the almanacs).

To get the regular accuracy, the recent ephemeris of the satellites used for the fix are required, this may take an additional few seconds. Ephemeris are updated each 30 minutes if I remember well.

Also to mention is GPS only really tells you where you "were" not where you are. GPS pulses are only received at the staggering rate of 1 Hz. So once a second you get a "position fix" on where you were one second ago, plus some dead reckoning on apps like Google Maps and such which attempt to guess where you are going between pulses. INS on the other hand computes almost continuously, with many aviation variant like the Honeywell 764 calculating position at about 240Hz.

Depending on the data interface connected, you won't get the position fixes that quickly (40hz) but that's still much faster than GPS. Plus an INS provides information to an airplane that's almost more important than position, and that's attitude, velocities, and accelerations. These are absolutely essential for systems like Autopilot, Heads up display, radar, etc. Plus with a closed loop Kalman filter, you can ensure that calculated errors are fed back into the system to give you extremely accurate position over a long period of time. (~0.1NM/he drift).

GPS is useless for autoland, autonavigation, and self contained approaches, which are a big deal for military applications. The Honeywell mentioned above is an EGI (enhances GPS/INS). It takes the GPS pulses and hacks the INS position every second. This really is the best of both worlds. When GPS is highly accurate (based on the position of the constellation overhead) then you can't beat a GPS position. But when GPS is bad, or denied, the INS will reject the hacks and get the job done.

GPS is convenient, but I don't think it'll ever replace a good old fashion INS.

25
Why does “no aircraft cross directly over the pole”?
55
Why do pilots use airways instead of just “flying direct” every time?
10
Why does a DME ground station wait 50 microseconds?
7
Why does this Garmin GMA340 have an Airway/Inner marker indicator?
7
Why does this chart seem to show airports with magnetic variation up to 90 degrees?
5
Why does Boeing 737 use 2 Inertial Reference Systems (IRS) and GPS?
4
Why is UTC activation time referred to 30W in NAT-OTS?
5
What is “picture flying” and does the FAA define it?