Is the Soloy Dual Pac recognised as two engines or one engine?

The Soloy Dual Pac apparently allows two engines to rotate one propeller -- here's a picture of it on an Otter: 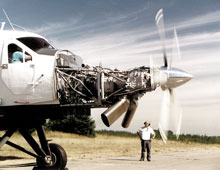 According to the certificate is a

No explicit remark is given about pilot licensing, but given the note reported, I would say that a licence for a single engine is sufficient.

Both would fly in the same way. We expect that an intelligent person would classify it as a single engine as far as only one control is used for both engines. A helicopter is different because it uses more than one control.

Not the answer you're looking for? Browse other questions tagged faa-regulations piston-engine pilot-certification aircraft-certification or ask your own question.

25
Has a fixed-wing aircraft ever been built that featured multiple turbines powering a single propeller?
9
Could a turbofan have two adjacent fans?

12
Can a pilot with an ICAO Multi-Crew Pilot License fly an airliner into the U.S.?
21
How much jurisdiction does the FAA have over military aircraft?
18
How might one start a new logbook for an engine that had one lost?
5
What is the theoretical maximum RPM of a typical aircraft piston engine?
5
Why aren’t diesel piston engines used on aircraft like the Saab 340 or L-410?
3
Why are piston-engined aircraft generally exempted from U.S. flight recorder requirements?
5
Why don't multiengine aircraft have to demonstrate spin recoverability?
2
Are aircraft certified for inflight thrust reversal required to demonstrate controllability in an asymmetric-reverse-thrust scenario?