Should the pitching moment be up or down?

I had a question regarding the direction of the pitching moment.

To make sure we are on the same page, here is what I know so far (please correct me if I am wrong).

I am trying to understand the concept of longitudinal static stability and in all the diagrams, the pitching moment is shown to be nose up. 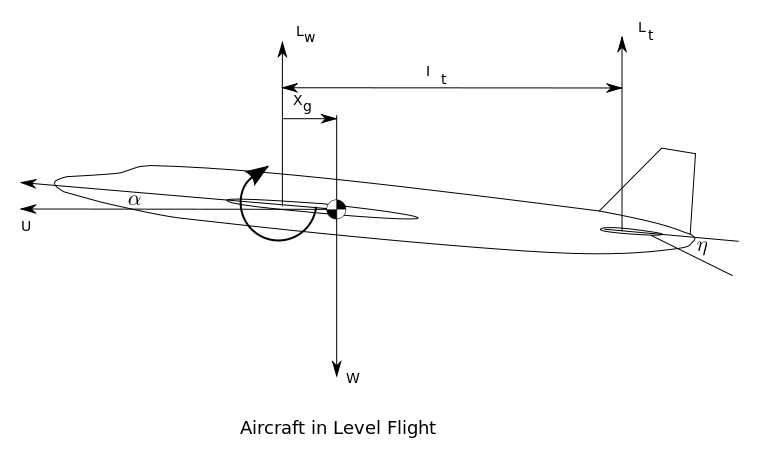 But I would imagine that the center of pressure is further downstream on a airfoil than the aerodynamic center, so shouldn't the pitching moment be nose down? As shown in this picture

Thanks for your help,

All points you mention are correct (for the nitpickers: Point 5 is only true below transsonic speeds). That the pitching moment of the wing is drawn nose-up is probably because it is positive this way - nothing more. The sketch you posted in your question is rather poor, with the center of gravity located behind mid-chord when it should be closer to the aerodynamic center.

Did you look at this answer for an explanation of static stability yet? Let me know if something is left unclear.

For the pitching moment, two distinct cases need to be considered, the airfoil and the whole aircraft, both over a range of Angle of Attack (AoA). The questions centre around the main wing only, the picture in OP is of an entire aeroplane, creating some confusion.

But I would imagine that the center of pressure is further downstream on a airfoil than the aerodynamic center...

Introducing centre of pressure confuses the whole picture, since it changes with AoA and we cannot construct a pitching moment situation that is valid for a wide range of AoA. Best forget use the Aerodynamic Centre instead in generalised considerations of stability and control.

the pitching moment is shown to be nose up

Peter alluded to it in his answer, but let's explicate it:

In the cases I have encountered, the clockwise (nose-up) circular arrow drawn just indicates the direction of a positive $M$.

However, the actual moment is negative in typical flight regimes, so, as you say, nose-down.

Just like the tail lift $L_t$ is drawn with an arrow pointing up, indicating that positive $L_t$ corresponds to upward tail lift, even though for many aircraft the tail lift in typical flight regimes is downward, ie negative.

25
How does an aircraft tailplane work?
10
Why are airliners not inherently "speed stable"?
11
Does static longitudinal stability require download on the tail?
2
Why does pitching moment coefficient decrease with an increase in the angle of attack?
3
Why is the CG assumed to be between the CP and the tail?

5
How to read the pressure diagram of an airfoil?
4
What is the meaning of the percentage used to describe the thinness of this glider's airfoil?
2
How to calculate variable pitch propeller parameters?
4
Documentation about "drag stabilized flying wings using non-reflex airfoils"?
2
How does the airfoil pitching moment relate to center of pressure?
2
What is the "Centre of Pressure"?
15
Why does the aerodynamic center exist?
3
What are the differences between symmetrical and cambered airfoils?
6
Why is the pitching moment of this symmetric aerofoil non-zero?
1
Comparison of pitching moment at different locations