What are the difficulties of landing on an upslope runway?

On runway like the one in Courchevel Altiport, how difficult is it to land? what is diffirent in the aircraft landing configuration when landing on an upslope runway vs normal runway?

Thanks for the answers guys, I didn't know that the airport had a level "touch down" point. still I am curious what should a pilot do (regarding air speed, pitch, flaps ...) if the runway itself was 10% upward (no level parts)... would the plane be in a "climbing-like" configuration? what about speed?

I never landed at Courchevel, but did some aerobatic training in Zar in the Giant Mountains of Silesia.

What I learned was:

The landing configuration and approach speed were not different from that on regular airports with level runways. Different was mostly the height at which the flare is begun. Also, at first I needed getting used to staying on my approach speed until I was low enough to flare - you need more energy to keep the airplane flying until it is level with the ground (i.e. climbing uphill!), so the final approach and flare must be executed precisely for a good landing.

When I saw the runway at Zar for the first time I thought the location is sheer madness. After a few landings I learned to appreciate the benefits: Very short roll-outs and planes would land uphill only, so they come to a stop where the (downhill) take-off run could begin. But the approaches need to be precise (we did mixed motor and glider flying) especially with gliders if you want to keep your fellow glider students happy.

As far as landing in a up-sloped runway is considered, the pilot will make a lower approach if not careful as he/she may consider the ground before to be sloping up as well. From flytime.ca: 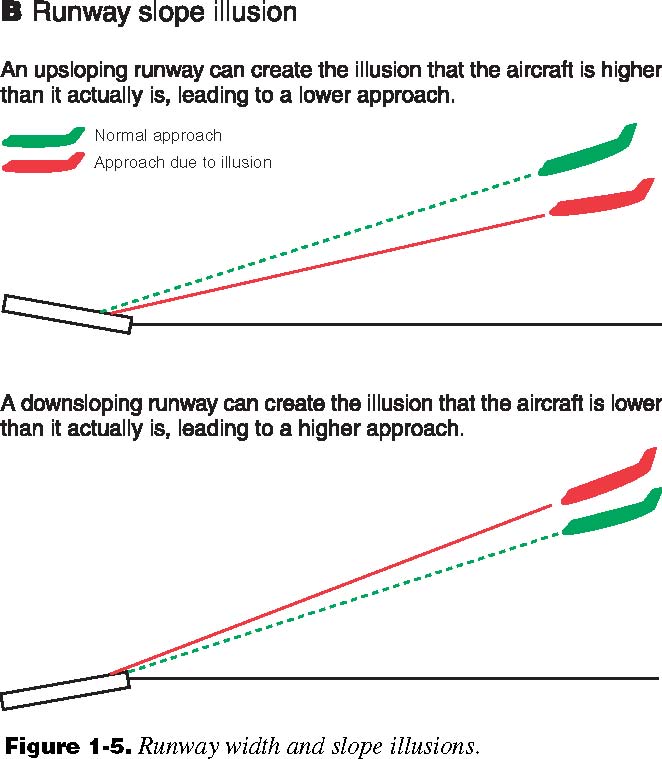 During the approach we were below the runway and climbed up to it to land. After touchdown, we slowed down very fast due to the upslope. Very different than the normal runout after a landing.

Of course the location of this particular runway means that the landing has to be done correctly the first time around.

Its not the upslope at Courchevel which makes landing there hard - its the big whopping cliff at the end of the runway. There is no go around so its a one-shot deal.

In general though, up sloping runways give two effects that I can think of

Courchevel is one of a few airports that has such a gradient but ill talk about it a bit more generally. Ron makes a good point in his comment that the plane actually touches down on a fairly level part of the runway then uses the up slope to slow down. With this in mind you must consider a few things, for one your touch down point must be at the more level end of the runway. If you think you are not going to make that, GO AROUND. Due to the mountains and up slope a go around is going to be a Vx scenario to make sure you get the best angle of climb.

In a more general sense you are going to want to be a little more nose up if landing uphill on a runway. I fly into KDDH which has a 0.8% gradient (barely noticeable) but when landing up hill I am a bit nose high to keep it safe. Its not a terrible idea to keep back pressure on and relive nose gear loads but this should be done anyway. Unfortunately the planes I fly are not permitted on grass strips and Im still working on really nailing my landings so 0.8 is the steepest I have flown into as of yet.

This site has some interesting info as does this site

I landed many times at Courchevel. You can't just fly in. You need a training culminating in a permission to land there valid for 6 months. That should make it safe enough.

Sudden downdrafts can CFIT you just under the landing area. Sudden updrafts can make you land way too far. That's why the pilot is VERY reactive on final. Once on the ground you have to make sure you keep your speed up enough to make it to the top or you could get stuck midfield.

As you could see in the video that Ron Beyer linked (2. comment on the question) trying to land slows you down substantially as you are effectively gaining altitude when landing on an incline as you need to level yourselfes to the ground. This will make it harder for the pilot as he will have to adapt to this behauviour and land with just the right speed to not loose gliding or aproach from too low and not take to long to stop on a this short runway.

In conclusion it will take some practise to learn what speed is the best for this particular landing, but that isn't really different for other runways. Another problem is the common ice due to the mostly cold wheather at 2000m above sea level, but that is not different to other airports in cold countries aswell.

1
Is it easier to take off against the wind or with it?

20
What aircraft has the highest suggested landing speed?
6
Is it feasible to replace brakes on airplanes with electric motor/generator?
5
What is the typical touchdown angle of a large airliner?
2
What are the effects of headwind strength on landing?
4
Upon landing (uncontrolled field), can I exit the runway via a crossing runway?
1
Is it okay to purposely stall a small single-engine aircraft just before touch down to get a good flare?
3
Can thrust vectoring be used to enable the use of flaps on tailless delta-winged aircraft?
1
How close to the envelope and the ideal was US1549 on ditching in the Hudson?