Why can a Pilatus PC-24 land on unpaved and short runways like no other business jet?

This sounds pretty impressive to me. But what’s different between a PC-24 and any other light medium jet on the market, which allows such short landing distances and the ability to touch down on unpaved runways? 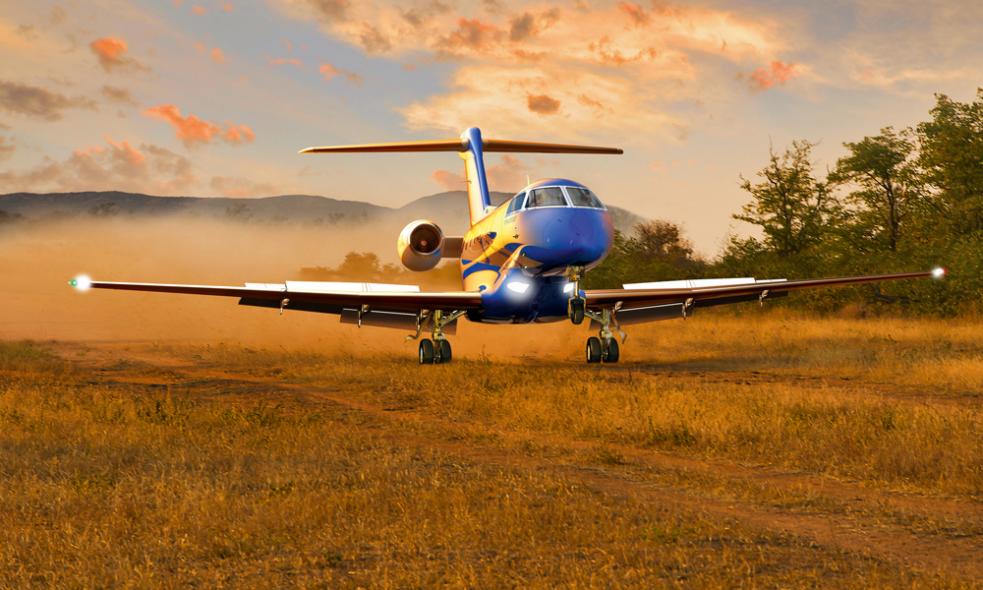 Press picture from Pilatus Aircraft which shows the landing on an unpaved runway.

The Wikipedia page on the Pilatus PC-24 gives you some hints:

The PC-24 is a twin-engine business jet, a larger jet-powered follow-on to the earlier Pilatus PC-12. It is considered to be a short takeoff and landing (STOL) aircraft, being designed to operate from short and rough airstrips. It incorporates an advanced wing design, with a large double-slotted flap system to achieve the necessary performance, having a stall speed of only 81 knots at the maximum landing weight. Pilatus has claimed that the PC-24 possesses performance attributes which are unmatched by any jet aircraft on the market. It possesses a takeoff distance of 820 m (2,690 ft) and a landing distance of 770 m (2,526 ft).

The PC-24 is powered by a pair of Williams FJ44-4A turbofan engines. [...] The engines are mounted on the upper portion of the rear fuselage to prevent foreign object damage (FOD) during operations at rough airstrips. Other FOD-reduction measures include the enlarged flaps and chines on the nose wheel of the landing gear. The exhaust ducts of the engines feature an aerodynamic modification, having been shaped so the outflow contributes to the thrust vector during takeoff, reducing the takeoff roll distance.

There really isn't a lot that is going different from other business jets other than a shorter take-off/landing roll. The design isn't dramatically different, and it doesn't mention it but it probably has reinforced landing gear.

No production PC-24's have been delivered as of yet, so its hard to tell what they look like. The test PC-24's only have 150 hours behind them so they may not have had any rough-strip experience. It's difficult to say exactly what the modifications are because they may include other things like FOD deflectors on the wheels.

Not the answer you're looking for? Browse other questions tagged landing pilatus-pc-24 or ask your own question.

22
How are modern jets modified to takeoff/land on a dirt runway?

37
Could you land a large airplane on short circular runways?
12
What is a land and hold short clearance (LAHSO)?
21
How does a large cargo plane like the C-130 Hercules take off and land in such a short distance?
30
Can a fighter jet land on a modified airliner?
9
Why would an airport use crossing runways for takeoff and landings?
5
Can an aircraft be stalled at low altitude and safely land on water?
8
Can I land a plane in a field in the UK and Republic of Ireland?
2
Why don’t aircraft undergo contaminated-runway landing-distance and rejected-takeoff certification testing?