What is the reason of having an Angle of Incidence on an airplane?

I know that the angle of incidence is the angle between the chord line of the wing and the longitudinal axis of the fuselage. I know that it doesn't change in flight because it is fixed.

And usually, there is a positive angle of incidence on airplanes, which means that the wing kinda looks like this:

Strictly speaking, there is no need to set a particular angle of incidence- the wing will decide that for itself depending on the conditions (speed, weight, altitude etc.). What we are deciding is the The mounting angle, which is set for various reasons and is not variable in flight (except for some rare cases) including:

Though the angle of incidence is usually fixed, it can be varied in response to specific requirements. A good example is the Vought F-8 Crusader, which allowed the wings to be pivoted 7° out of the fuselage on takeoff and landing, resulting in a high angle of attack -- reducing the approach and take-off speed -- while keeping the fuselage level and giving the pilot a good forward field of view. 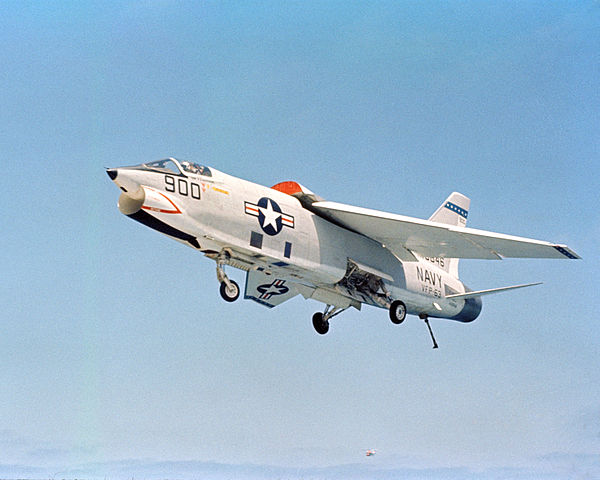 Another example is the Martin XB-51 which had a variable incidence wing to reduce the takeoff run.

The wing will pick the angle of attack that is appropriate for the given speed, air density and the needed lift. If it is too high, the aircraft will accelerate upwards which will reduce the angle of attack, and vice versa. The wing's angle of incidence will then define the angle at which the fuselage sits during flight. What a proper angle is depends on the aircraft:

The next important detail is the height of the tail surface relative to the wing's vortex sheet. If the tail is too far above, it will sink into the wing's wake during stall and become less effective. A deep stall stability condition might be the consequence. Only by defining the angle of incidence can the airplane be built and operated as designed.

My understanding is this. One of the design consideration of fuselage design is to avoid flow separation. And another important thing is that usual looking fuselage is not very efficient at providing lift because both above cases produce huge amount of drag.

Secondly to produce max L/D or nearly max L/D wing has to operate in some positive AoA.

This can be achieved by introducing this incidence angle.

You understand that lift is generated by the action of the wing pushing air molecules down as it moves forward, requiring an angle of attack to the air passing under the wing? So if you don't tilt the wing with respect to the body of the aircraft, then to get the angle of attack required to generate lift, you would need to tilt the body as well, greatly increasing the (non-lift generating) surface area and so greatly increasing the drag.

Angle of incidence is required to generate lift if the roll axis is parallel to the airflow. Otherwise the fuselage would also be required to present AoA in order to generate lift. The wing's AoA = AoA of roll axis + angle of incidence and AoA is the primary creator of lift, not the shape of the wing, contrary to popular belief. Otherwise how could planes fly inverted?

43
What is a 'deep stall' and how can pilots recover from it?
5
What are the properties of the wing (airfoil symmetry, angle of incidence) of an aerobatic aircraft?
8
What were the disadvantages of early prop driven blended-wing aircraft?
2
Is the angle of attack equal to zero when the plane is on the ground with wings level?
3
For a flying wing airfoil, which AOA is to consider when selecting Cl?
1
What is the pressure distribution around a supersonic wing?

6
What is the incidence angle of a propeller in the terminology of the Wright Brothers and how did they obtain it?
5
Is it possible to maintain horizontal flight with the angle of attack above critical value by increasing speed?
3
How can I find the optimum chord wing length for this wing?
3
What is the relationship between Angle of Attack and Angle of Incidence?
3
How common is it in current British usage for the angle between the chord line of a wing and the flight path to be called the "angle of incidence"?
2
Is there a standard word or phrase in the English-speaking world to describe the angle between the fuselage and the flight path / relative wind?
0
A question about the exact meaning of one British usage of the term "Angle of Incidence"
1
Does this web page really correctly depict the angle that is called "incidence" in the French language in the aviation context?
6
Definition of aircraft longitudinal axis?