Can we borrow Formula One's ground effect for airplanes? 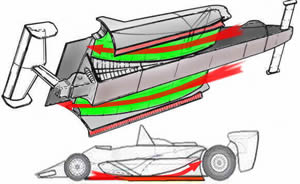 Inspired by the now banned late 70's F1 ground effect, I wondered if it can be adopted by airplanes. So, I came up with this:

A belly door that opens at slow speeds and leads to a narrowing cavity—inverted diffuser.

In essence, the same as the F1 image above, but enclosed since there's no ground. And inverted since we need lift, not downforce. An F1 car's ground effect is the opposite of a plane's ground effect. The door is to stop its operation at high speed.

The narrowing cavity will speed up the air, the air in the cavity thus will lose pressure (potential energy tuned into kinetic), the air outside the plane and underneath the cavity will be higher pressure, forcing the plane up.

The engineering why is higher top speed, and low angle of attack slow flight.

Can it fly? Are the assumptions above correct?

Engine location, nose gear location, etc., are not part of the question, just a pure aerodynamics question if we can make a cavity produce lift.

The force on the ground is irrelevant because it doesn't move and is not attached to the car. But in your drawing the same thing is happening. The reduced pressure exerts an upward force on the bottom of the channel and an equal downward force on thing top of it. They cancel each other.

The issue here is that ground effect requires there to be another body in which the airfoil is in close reference to (i.e. the ground).

The wiki article sums it up nicely

You cant have ground effect occur inside an airfoil and generate lift in reference to that airfoil.

In a more general answer, there have been "aircraft" of sorts (generally known as Ground Effect Vehicles) that have taken advantage of ground effect and the reduced drag benefits. Generally speaking they were never terribly successful as they have a limited mission profile due to their operational requirements.

No, this doesn't work: it's directly analogous to trying to fly by grabbing your shoelaces and pulling upwards.

Now, the same force is exerted on the lower part of the aircraft- so in effect, the net lift produced is zero.

In short: The mechanism on F1 is a Venturi tube. This tube and the principle of a wing have similarities between themselves, but the significant difference is the absence of downwash in the Venturi tube. Due to this absence, lift is not created.

The car wall and the ground create a Venturi tube. In a Venturi tube air pressure is reduced where the section is constricted (according to Bernoulli principle):

This suction effect is the one also at work on a carburetor (where it can create icing due to temperature being lowered in the low pressure section) or an airbrush: 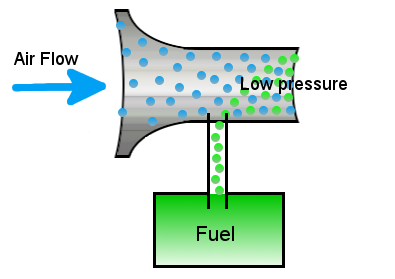 It works in F1 because there is a tube created with the ground, the walls of the tube have a tendency to move closer, so the car is maintained close to the ground. There is no lift per se, the vertical air motion (downwash) necessary to produce lift isn't created. So your design principle...

A belly door that opens at slow speeds and leads to a narrowing cavity—inverted diffuser. In essence, the same as the F1...

... won't create lift, because air mass, velocity and pressure are equal at inlet and outlet.

And, as soon as you adjust the Bernoulli/Newton effects so that there is an acceleration and a downwash, then you have created a wing: 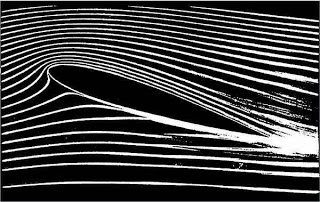 In a wing, there is somehow a Venturi tube too: The upper wall is actually created by the viscosity and mass of the atmosphere above the wing, outside the boundary layer, and the lower wall is the wing upper surface:

31
Why the ground effect has such a different outcome for wings and cars?

11
Is the stall speed different at -1G?
33
Why don't helicopters always takeoff from a hover out of ground-effect?
31
Why the ground effect has such a different outcome for wings and cars?
7
Is it practical to use ground effect to extend range in an emergency?
9
Why is ground effect greater over smooth hard surfaces?
0
How does a diffuser (in ground effect) accelerate the air in front of it?
1
Will this specially shaped can produce any lift?
5
Ground effect and Lift coefficient