Would a slotted "wing" work?

The early history of aviation is full of crazy designs, so please allow me this one:

A span wise narrow gap in the wing halfway between the leading edge and the trailing edge.

The door to the gap would be aerodynamically balanced, it would open at slow speeds. The gap cross section would be nozzle shaped to accelerate the air from underneath the wing to the top side. Lowering its pressure.

At the wing root and tip there will be no gap.

The idea is similar to slotted flaps and slats, but with the aim of energizing the aft portion of the wing. Thereby combining slats and flaps into one. Would it work?

In other words, it would split the wing into two smaller wings.

I expect the answer to be no, but would love to know why.

Edit: edges below are meant to be curved. 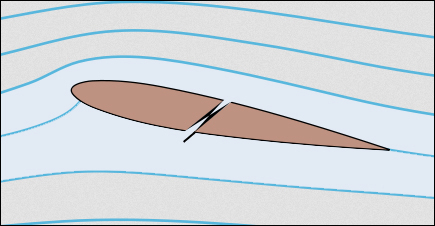 This might be a bit late but the short answer is, again, no.

Check NACA report 427 and Experimental investigation of a Handley Page 44f wing. Slots at locations other than the vicinity of the leading edge are shown to be rather useless.

In addition, there seems to be no correlation between the "rounding" of the channel inlet and a better performance. The latter is solely my deduction since I co-authored the HP44F experiment.

If the slot is located too far aft., separation has already occurred, in which case there is hardly any kinetic energy to be transferred and the attached flow on the trailing element is unable to provide any substantial benefit. 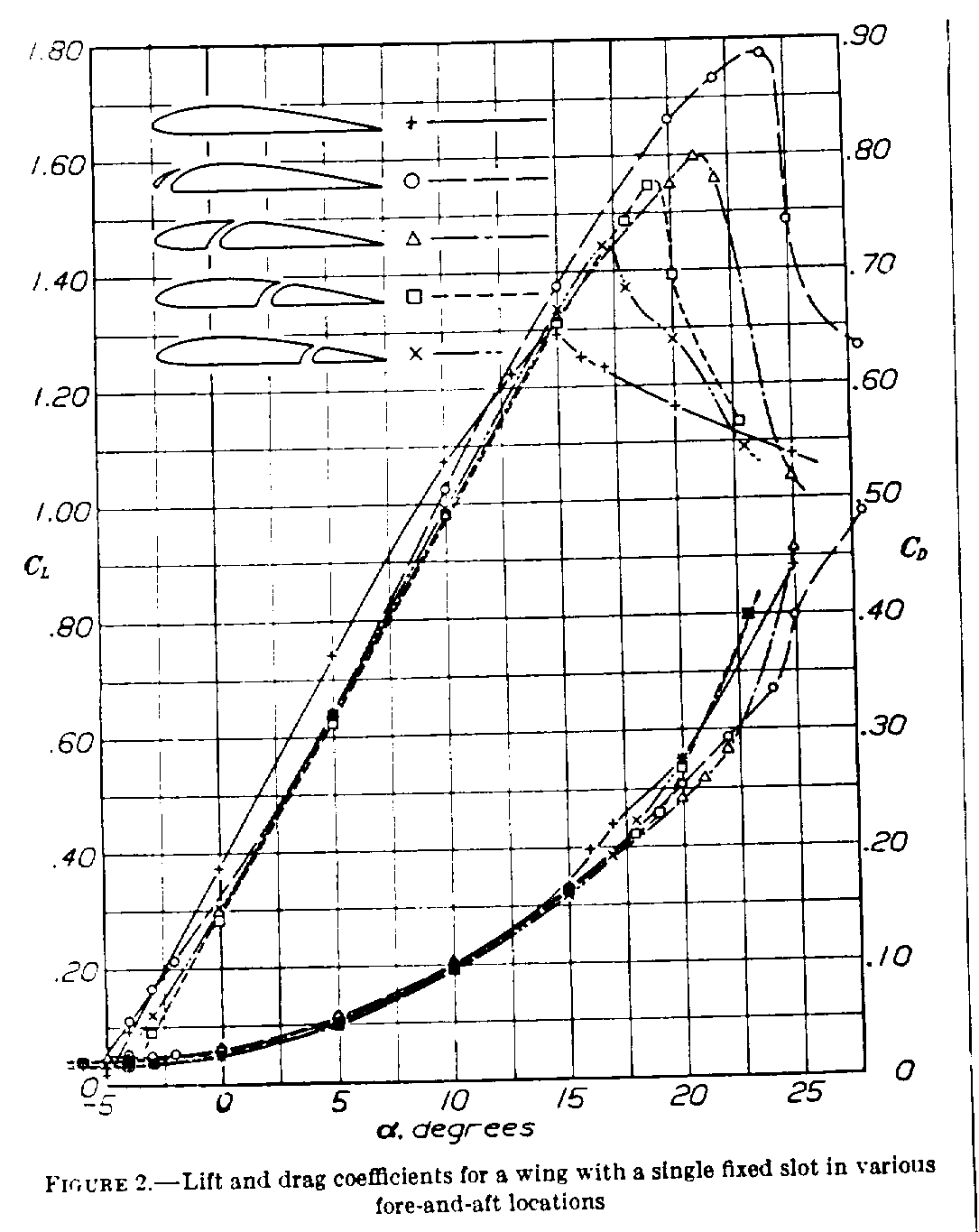 No, it will not work in the way you plotted it.

First, the corners of the duct should be nicely rounded. With the sharp corners you will get a lot of vorticity, but little lift increase. Actually, lift will drop and drag will go up.

Next, a gap works best when connected with a contour break, such as that of a slat or a flap. If you round the corners and add a hinge in order to deflect the rear part of the airfoil, then yes, the gap will help to delay flow separation.

It works but your description is not so clear about the real size of the gap.

Gliders sometimes have little holes along the wing on the upper side where air from beneath is provided to them by a little duct.

The reason is to keep the linear air flow straight a little longer at low speeds.

I have not found a live picture. For this I'll have to visit the DG300 of my flying club.

11
How does the slotted flap work?
8
How do blow holes compare to other means of tripping the boundary layer?
5
Where can I find articles about Handley Page multi element segmented airfoils?

4
Would solar panels on the wing of an aircraft increase drag?
2
Would there be any advantages to a wing with a concave upper surface?
11
How does the slotted flap work?
9
If no low-speed compromises were made, what would an ideal Mach-3 wing look like?
7
Why does the A320’s maximum allowable aileron deflection decrease, rather than increase, when the flaps are extended?
1
Would a slotted flap still work if the prop is located mid wing between the wing and flap?
2
Would plain and slotted flaps increase lift substantially in a distributed propulsion application?
1
Does the quarter-chord-angle rule still hold for wings with very long chords or large differences between leading- and trailing-edge sweep angles?