What aerodynamic implications would a fictional two-pronged fuselage have?

Often I see some fictional futuristic aircraft with a two-pronged fuselage, as if they were absurdly oversized canards.

Is there any remote possibility for an aircraft to benefit from such a design?

What would the implications of it be in an actual aircraft? 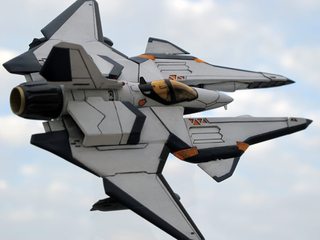 Image source: Vic Viper, You are Cleared for Take-Off—kotaku.com

EDIT: Just to clarify things up a little, since I kind of came out of nowhere asking this weirdness. These forked-wing designs is notoriously an aesthetic artifact, my intention is to design a handful of fictional aircraft for a hard-sci-fi novel. I find this design very beautiful but it just screams out impracticity, since I don't like the idea of designing something that wouldn't even take off, i'm after thoughts from specialists and enthusiasts about such design, to seek for any feasible excuses to use it, if it does not gives any positive point except for looking nice, i may just scrap it and get going with more rational designs.

This is actually something that has been investigated, at least in some dimension; one prototype aircraft, the XF5F, had one long wing with the leading edge some distance forward of the pilot. The purpose of this prototype was to examine an aircraft with exceptionally high rate of climb, achieved by the two large engines - uncharacteristic for an aircraft so small. The position of the engines means that the centre of gravity is quite far forwards; the wing being in front of the cockpit counters this somewhat by bringing the centre of lift further forwards too.

The prototype apparently performed well and was loved by its test pilots (though some of this can be put down to its innovative contra-rotating propellers, a new development at the time). It was soon replaced with a much altered and more conventional version, so never saw any real action.

Anyway, the point I'm trying to make here is that in Layman's terms, I believe the only reason for canards or wings projecting so far in front of the cockpit would be to counter something which brought the aircraft's mass unusually far forwards. Even then, I see little reason for splitting this wing into 2 segments to give your pronged design - maybe to give the pilot a better view?

Edit: In response to Lucas Flicky's edit, I'll add a thought on how/why this might be practical in a sci-fi setting.

As I've said, we need a reason for the CoM to be further forward, necessitating a lifting body at the front of the fuselage. There are a couple of ideas I can think of - one of which is weaponry. Stick some big, heavy guns on the ends of your forward wings and they'll effectively balance out the cockpit at the rear of the aircraft. A good excuse for this would be dangerous lateral discharge when the weapon is fired - you simply can't have them behind the cockpit on conventional wings, as this would endanger the pilot. And as I said earlier, you can split the canards in the middle to give the pilot a more commanding view.

As a side note - this seems like an impractical design as it means you can't fly any unarmed versions of the same aircraft. In fact a similar issue very nearly existed with the Eurofighter - the RAF very nearly introduced a policy disallowing the use of guns on the aircraft. Had this rule remained in place (it was overturned in 2006), the Typhoon would have been delivered with their cannons installed but disarmed, as they were required for ballast!

I don't see any benefit (besides optics, but this is debatable). Compared to a single fuselage, these disadvantages exist:

Also, the fin in the picture is too small to provide sufficient directional stability without artificial enhancement.

One could compare this design to the F-35 Lightning II; specifically, the engine placement on the F-35. As you can see in the image below, the engine is placed unusually far to the front, and as a result, the tailplane is very similar to the situation you describe - only in reverse.

The reason for this is (amongst others) radar cross-section. Since the engine has a terrible radar cross-section (lots of rotating parts that will reflect radiation everywhere), it is placed in a more 'hidden' spot, nicely between the tailplane. Although this did cause some problems with placing the landing gear, increased weight due to the odd tail assembly, and a generally 'fatter' airplane, this was evidently worth it.

Similarly, a cockpit contains many reflective parts. Especially in a science fiction setting, one could easily conceive of a scenario where simply applying a special coating to the cockpit is insufficient to mask the cockpit internals from RADAR (or other more futuristic detection methods). Placing the cockpit further aft, nicely hidden between the canard wings, could be a viable method of reducing the radar cross-section. 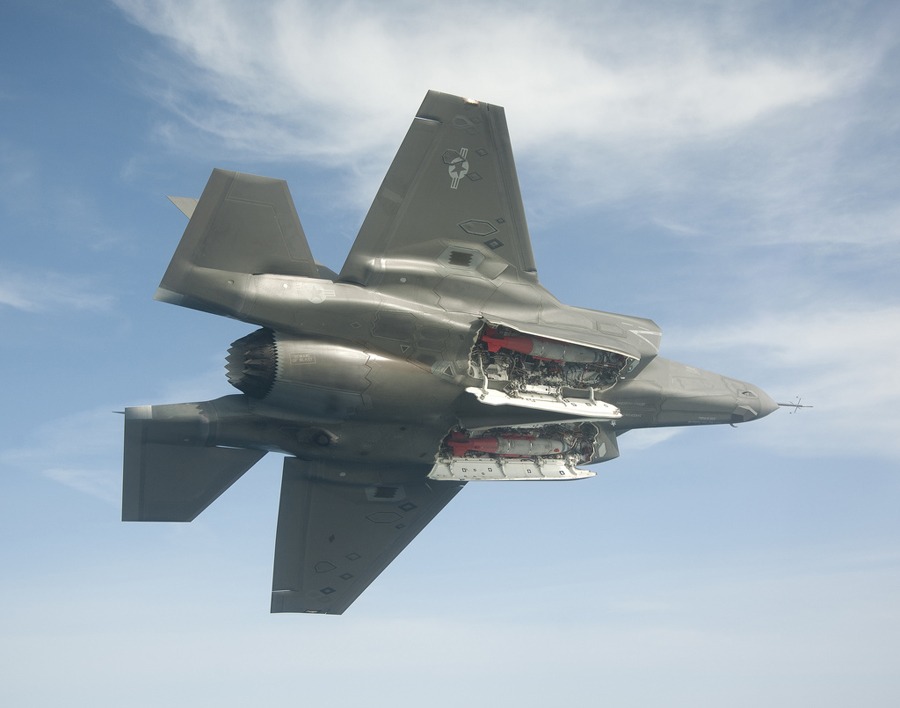 Taken from Why is the F-35 engine nozzle exposed?

You could motivate an aircraft featuring a twin fuselage with benefits in the engine intake characteristic. Fighter aircraft with engine intakes mounted on the side of the fuselage suffer from high yaw angles/rotations due to turbulences from the fuselage. Similar effects occur with underbelly intakes at negative pitch. Protruding fuselages may be designed with center air intakes and thus allow good engine performance over a wide range for aircraft angles and rotation. There are plenty of reasons against this twin-fuselage design (with many of them in fact being posted in this thread). That should not hinder you from justifying your design trade-off with a proper explanation.

22
What are the advantages of twin-fuselage aircraft?
12
Why is the F-35 engine nozzle exposed?

22
What are the advantages of twin-fuselage aircraft?
1
what would happen if we use needle shaped nose in blended wing?
2
Would turbulence created by two jumbos less than 100ft apart cause both of them to crash?
14
What size/engine/payload aircraft would be needed for carrying two passengers and a motorcycle?
5
What are the physical/aerodynamic implications of designing a prop guard for multirotors?
4
What flights were significantly affected by insects hitting the fuselage?
1
What are the aerodynamic implications of different conditions with the same Mach number?
3
Fighter jet with two rudders, the deflection angle it is not identical. One have more angle of deflection. Why?
3
Does the aerodynamic center always have to lie on the chord line?