London is by far my favorite city, and many people in Honolulu apparently feel the same. An old poll (5-6 years ago) said that 50% of polled people would go to London on that flight if it existed. The airlines are quite definitely aware of this, as Hawaiian Airlines responded a year later by saying they would make a direct flight. But it never happened, and no one has heard anything from them on the issue since. (This was more than four years ago.) I have considered the following:

After my pondering, I have concluded that there should be no problems connecting the two popular destinations. So why are there no flights? They would mean certain profit for the first airline to offer the journey. (They could charge whatever they wanted to.)

Simply, because no airline has determined the route makes economic sense.

A poll doesn't necessarily translate into a ready market of passengers. Sure, lots of people might check a box on a survey saying they'd like to see such a thing, but does that really translate to thousands of people actually a significant sum of money for the service? Would enough of them travel frequently enough at a high-enough price point to make the service worthwhile? There's no guarantee of "certain profit," and considerable money could be lost investing in such a route if it turns out not to be a success. A few reasons why it might not be a slam dunk:

Also, according to this forum post, a service was operated in the early 80s (with a fuel stop), and it was rather unpopular and thus unprofitable.

All that said, ultimately, all we can do is speculate. Airlines study potential routes extensively, but they don't release their internal numbers. If one thought it made economic sense, they would introduce the new service.

Hawaiian Airlines only recently started acquiring airplanes (A330-200) that are capable of that range. According to Wikipedia, London and Paris routes were discussed.

My speculation is that buying a landing slot for London or Paris at the moment is too expensive for them.

Busy airports in Europe don't have enough slots for everyone. Airlines end up trading those slots.

Allocated landing slots may have a commercial value and can be traded between airlines. Continental Airlines paid $209 million for four pairs of landing slots from GB Airways at London Heathrow Airport, \$52.3 million each.—Wikipedia 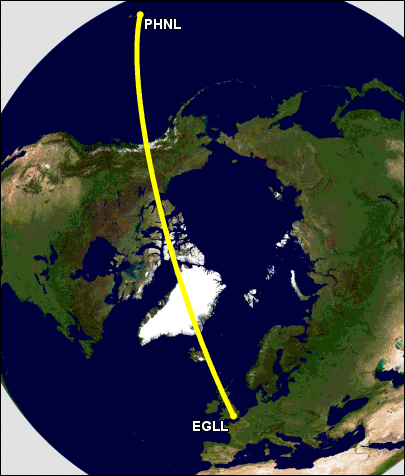 Hawaiian Airlines simply doesn't have any aircraft that can operate the flight.

For now, Hawaiian Airlines does not consider its A330-200s to have sufficient range to reach London with the desired payloads and it's not yet sure whether its upcoming A330neos will be able to, either.

Flights to London are a goal but may be at the limit of what’s attainable after the carrier swapped its order for Airbus Group SE A350-800 jets to the shorter-range A330neo in 2014, Hawaiian Holdings Inc. CEO Mark Dunkerley said in an interview Wednesday.

“We certainly hope the answer is yes but we don’t have all the information we need,” he said. “It’s going to depend on what our final seating configuration is and therefore the weight of the Neo and its exact performance and statistics when it’s actually built.”

Note from the above quote that Hawaiian has replaced the A350 order mentioned in another answer with an order for A330neos instead, so it currently has no A350s on order.

One interesting note from that same interview is that Hawaiian is also looking at possibly acquiring some of the cheap A380s currently floating around on the market. However, it's considering these for its current high-demand markets such as Los Angeles, Las Vegas, and Tokyo, not expansion to Europe.

Dunkerley, 52, said the airline is looking seriously at whether the Airbus A380 might have a role to play within its network, especially on routes such as those from Honolulu to Los Angeles, Tokyo and Las Vegas, which it serves with smaller wide-body planes six, three and two times daily respectively.

The argument for using the superjumbo, which might be available on attractive terms either from Airbus or, soon, in the second-hand market, isn’t conclusive and Hawaiian needs convincing of the business case, Dunkerley said.

The main problem overall with direct flights between Europe and Hawaii (on any airline) is what Zach mentioned in his answer: It's an ultra-long-haul leisure route.

It's very hard to make the numbers work for such a route, as airlines typically rely on selling expensive close-in-booking and premium-cabin tickets to business travelers as well as relying on them to keep load factors up in order to turn a profit for their ultra-long-haul routes. This route would also be competing with several existing single-stop routes with connections in New York, Chicago, Atlanta, Denver, Los Angeles, Seattle, etc. These routes are already economically feasible due to the much higher demand for traffic to London from these connecting points (and other cities feeding to them) than from Hawaii. Similarly, demand from the U.S. mainland to Hawaii is much higher than from Europe to Hawaii, so those existing flights remain viable.

With that said, there are recent rumors regarding the Swiss leisure-route-focused airline Edelweiss possibly starting a route to Hawaii from Zurich soon using A340-300s, but this is presently still unconfirmed. The economics of this seem pretty sketchy, though, and the "as early as December 2016" start date mentioned seems even more sketchy.

Not the answer you're looking for? Browse other questions tagged airline-operations usa flight-path uk long-haul or ask your own question.

3
How do airlines plan their payload for multiple flights in a day?
5
Does ATC direct flights to fly eastbound at odd levels and westbound at even ones?
4
Why is Iceland an efficient connection point between London and Boston/NYC?