How much extra drag does landing gear incur?

How much extra drag does landing gear incur?

Drag is a force measured in newtons.

Since drag equals thrust in level flight, we can work out an approximation for any aircraft that has a counterpart in MS Flight Simulator or similar software.

Before you fly away, real values would require renting a CFD / wind tunnel facility, or access to the 747 flight test data.

To compare the drag before and after, fly at the required altitude/speed, and notice the fuel flow with and without the gear extended.

Write down both fuel flow values, look up the jet engine model from jet-engine.net/civtfspec, note the number of engines, and use the SFC value (lb/lbf hr) to find out the force differential in lbf, then convert to Newtons. 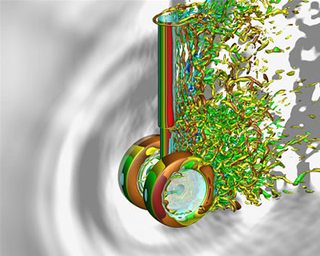 Source—CFD visualization of the turbulent structures around a landing gear.

In other words, the landing gear alone consumed 2600 kg/hr of fuel in those conditions.

That agrees with Terry's experience:

It's enough drag that in flying a 747-100 gear down the 600 nautical miles from Yokota Air Force Base near Tokyo to Osan Air Force Base a bit south of Seoul, we burnt more than twice the projected fuel burn. Had we not been tankering fuel to avoid refueling at Osan, we would not have been able to do it when we couldn't get the gear up. It was all we could do initially to stagger up to FL190, and we never got higher than FL220.—Terry

At approach speeds the landing gear drag should be much, much lower.

[The] drag depends linearly on the size of the object moving through the air.

[The drag varies] with the square of the relative velocity between the object and the air.

There is one data point from real life: An Airbus A-310, scheduled to fly from Chania (Crete) to Hannover, Germany, a distance of 2197 kilometers, could not get the gear up after take-off on 12 July 2000. The crew decided to fly slower in order to conserve fuel and initially tried to divert to Stuttgart. When they realised that fuel flow was higher than anticipated, they reduced their trip planning first to Munich and then Vienna. On approach, while still 12 nm out from the airfield, the engines cut out and the aircraft landed just short of the runway, incurring damage beyond economic repair. None of the occupants were injured during the landing.

The distance from Chania to Vienna is 1545 km, and the aircraft used up all the fuel onboard, including reserves. This makes the distance flown about half of what would be possible with gear up and exhausting reserves. Since the added drag from the landing gear shifts the optimum range speed to a lower value, the aircraft had to fly not only slower, but also lower than normal, and a direct comparison of the drag with and without gear extended is impossible.

11
Has there ever been a tail-dragger with retractable tail-gear?
9
Do jet aircraft have a better glide ratio than propeller aircraft in general? If so, why?
9
Is there no warning if landing gear is not retracted during flight?

8
How much drag do the gear doors create during retraction?
2
How much damage could a landing gear malfunction do?
4
How can drag induced by the landing gear be reduced?
5
How does maximum speed vary with altitude?
0
How does landing gear affect thrust on a light twin-engine airplane?
1
Would it make sense to test the performance and handling of a prototype aircraft by mounting a free moving mock up on a track (like a rocket sled)?
2
How much extra drag does an external HF antenna incur?
0
How much is an airliner's drag coefficient?
1
How much energy does unretracted landing gear consume?
1
Landing gear drag and weight calculations