What kind of failover system do Airbuses with side sticks have?

Airbuses use joystick-style side sticks for controlling the aircraft. Among the features of this system is that there exists no mechanical connection between the joysticks and the control surfaces.

In case of an electrical failure, what backup system is in place to make sure the pilot still has control of the aircraft?

In case of a total electrical failure, the aircraft can still be controlled using rudder pedals and manual pitch trim.

The airbus EFCS (Electronic flight control systems) are configured as below: 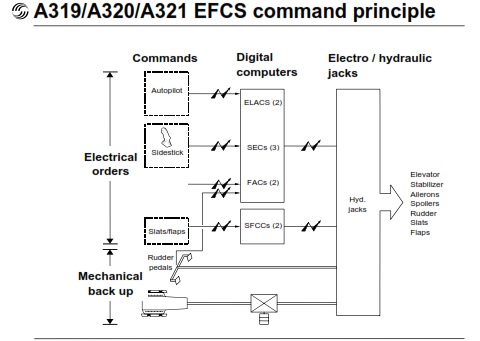 In case of a complete loss of electrical flight control signals, the aircraft can be temporarily controlled by mechanical mode.

The A340 also seems to have a similar system. From the A340 Flight Deck and Systems Briefing for Pilots:

• To sustain the aircraft during a temporary complete loss of electrical power.

• Longitudinal control of the aircraft through trim wheel. Elevators kept at zero deflection.

• Lateral control from pedals. Roll damping is provided by the Back up Yaw Damper Unit (BYDU).

A340 mechanical Backup system; image from A340 Flight Deck and Systems Briefing for Pilots

Note that this is given only as a temporary measure. Also, See How are fly-by-wire airliners controlled in case of complete electrical failure? and How does the Airbus flight computer's voting system work?

Not the answer you're looking for? Browse other questions tagged flight-controls airbus or ask your own question.

25
How does the Airbus flight computer's voting system work?
24
How are fly-by-wire airliners controlled in case of complete electrical failure?
13
How are Airbus pilots trained for using the mechanical backup control systems?

13
How are Airbus pilots trained for using the mechanical backup control systems?
11
What aircraft had the first pilot-assisted controls?
10
In an aircraft with tab-flown control surfaces, how can a jammed surface be detected during preflight examinations or flight control checks?
5
Why did fly-by-wire systems take so long to implement?
7
Why don't the A380 and A350 have trim wheels?
7
Why does the A320 use the rudder for lateral control in mechanical law?
1
B777- In emergency mechanical back up how does the flight controls manage engine failure
5
Why do the A320’s primary flight controls have hydromechanical backups only for the rudder?
9
Are 737 pilots required to train in manual-reversion flight?