Are there planes with electronic joysticks as shown below? 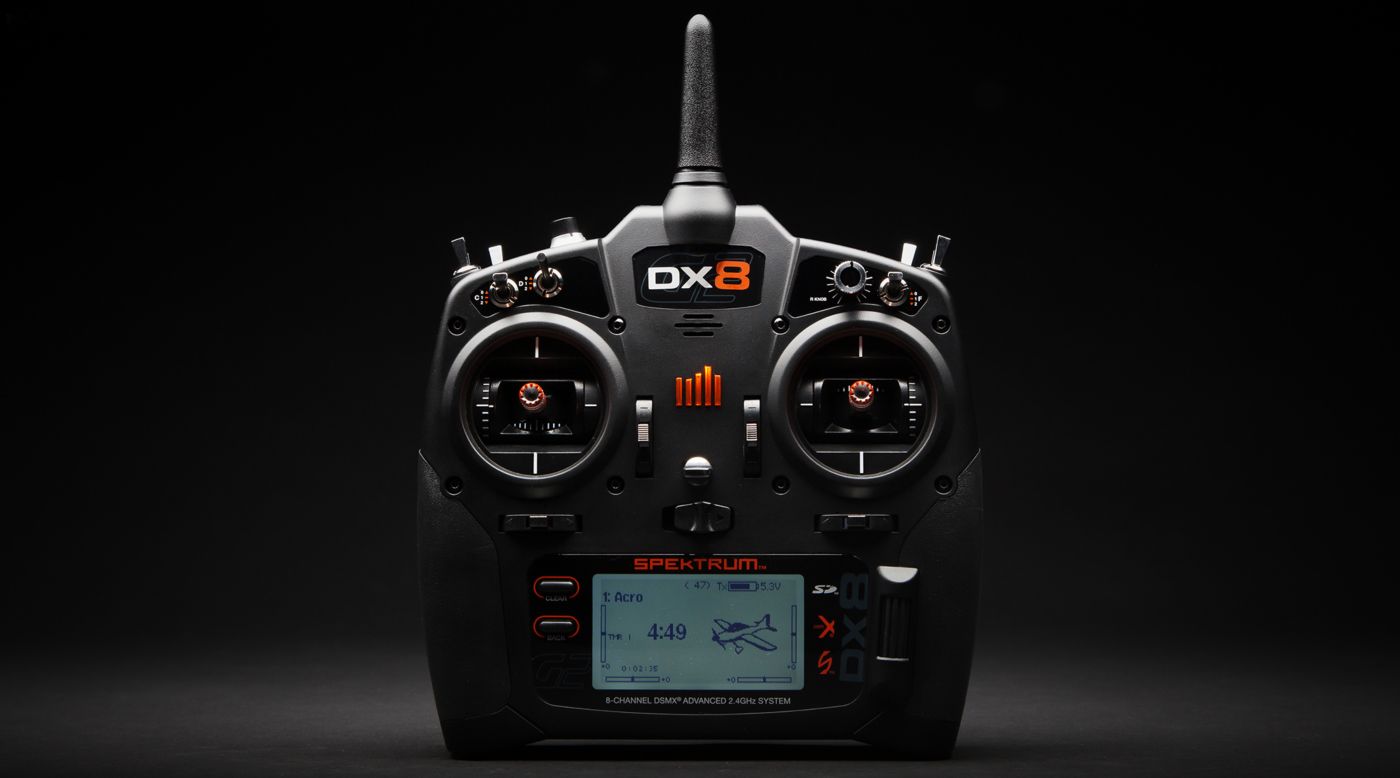 RC airplanes are incredibly effective at using this technique. For actual planes it would remove the need for rudder pedals and a stick along with potentially being easier to get used to.

Are thumb controlled sticks used in aviation? or is there a reason to why they aren't used?

As others already said, joysticks are used. But there is a fundamental difference with the RC controls.

We humans do much better job of dynamic control when controlling the force rather than position/displacement. It is too long a discussion why, but the main reason is that we have special force feedback sensors in our muscles. (Yes, it's a common misconception that we have only five senses).

For this reason, airplanes are generally controlled by force. Even those that have mechanical links and deflect the controls proportionally to position; even those FBW that measure position of the controls (the first type that Peter Kämpf mentioned) - they still, in the end, are controlled by human force. This is why correct loading (spring or otherwise) is crucial: certain displacement requires certain muscle force, and this force we apply and control.

Ideally, you want to tune the loading so that a certain force would produce a certain desired end effect. Say, each 1 kg pull produces additional 0.1g of normal acceleration. This naturally happens with classic reversible controls: when airspeed increases, the required control deflection (for a given acceleration) decreases significantly. But the required force per unit of deflection increases by the same amount. Thus we have constant force per acceleration, despite having very different control travel. This travel difference can be an order of magnitude, but it poses no problem for the pilot, because force is the same. In fact, pilots use it as a secondary feedback about airspeed.

Electronic (FBW, fly-by-wire) joysticks could be made to require no or little force, like RC controls, but this is never done. A great deal of effort is invested in producing optimal loading. For one, an accidental move of a light control might destroy the airplane. (This may happen even with RC airplanes, which are much stronger relatively). But even more importantly, it has been proven that gradual precise force control works better for us that position control.

This is why some aircraft (starting from F-16) moved away from positioning entirely and measure force on the stick directly. However, this just doesn't feel natural for us: we expect some movement in response to a force; so a small amount of movement is generally allowed even for pure force control.

The amount of travel also matters, but this is only a secondary feedback. Besides, it works better when we see the movement, which doesn't always happen when flying.

When you press brake in your car, you also feel and coordinate mainly the force on the pedal rather than its position. This allows you to adapt to different cars quickly. Racing cars have very little pedal travel. But if the required brake force was very light, you wouldn't be able to brake smoothly, no matter what travel there was.

Now the RC controls have almost insignificant spring, and are actually controlled by position. Normally, this doesn't give a precision anywhere near what a real airplane would require. As Daniel noted in his comment, you wouldn't be a happy passenger on such an airplane. This is partly mitigated by using a very close position reference (the hands grab the sides of the control) and using our most sensitive fingers, but still only partly.

They are used, they are just bigger joy sticks than used for RC flying.

A current example is the Airbus A320 (and related family) of passenger aircraft. A short video of the joystick in action(called "side stick", start at about 1 minute in). There is no direct mechanical linkage between the stick and the flight controls. 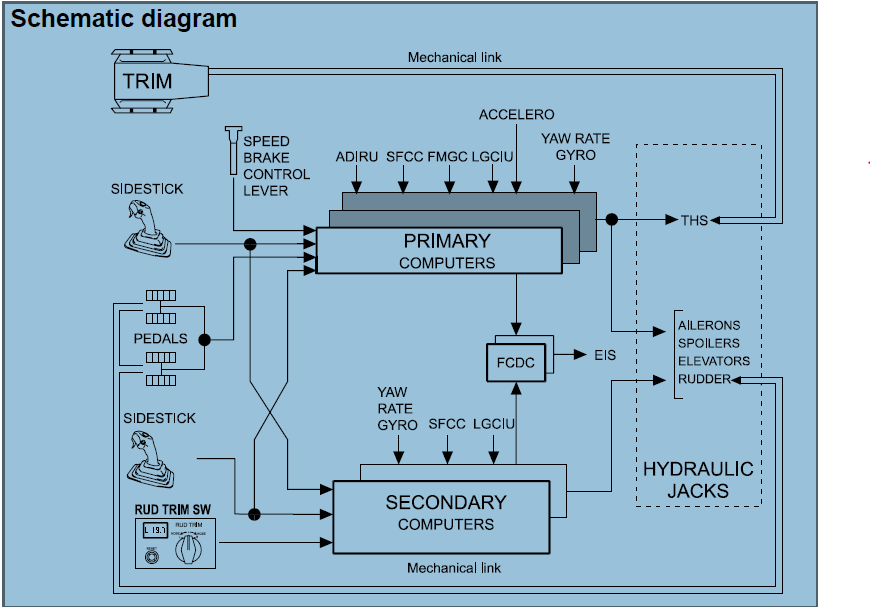 For more detail, you can download this (slightly out of date, but with enough information to be useful) Flight Controls lesson for the A320 here.

I am more curious about thumb controlled flying as you could control everything from what essentially looks like a video game controller.

... even video game controllers are terrible for this. The bigger the stick the better fine control you have over it. This is why for flight sims for PC's and consoles, keen players buy proper joysticks - otherwise they are twitchy and hard to handle

Video game controllers require two hands, have poor sensory feedback (as compared to a stick type controller) and are not as ergonomically effective as a multi-axis stick. Also, there are some "push buttons" on a control stick that allow moving a finger or a thumb to activate other functions, like the "take control" button in the side stick(For swapping control between left seat and right seat pilots). On some sticks you'll also have the "push to talk button" for the radio, as has been done for decades. It's an efficient use of the hand, without having to move the hand for multiple tasks.

A thumb operated joystick requires fine motor skills while a big lever on the same joystick (essentially the modern control device as answered by KorvinStarmast) provides the same functionality but with larger movements required to make them. This is helpful for subtle control work and makes piloting in turbulence feasible, something RC flyers don't really have to contend with while standing on the ground.

Thumb controlled? No, this would be impossible in a moving aircraft. For precise input, pilots need to rest their forearm on an armrest while handling their joysticks. Due to their location at the side of the pilot's seat they are called side sticks. There are even two different types: 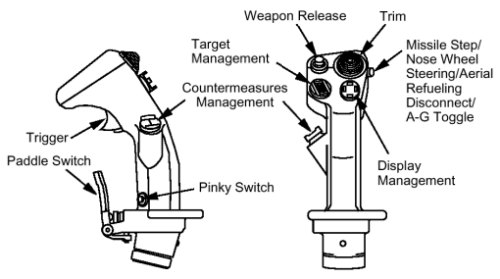 F-16 control stick (picture source). Due to the complexity of the system which they control they have a lot more buttons and switches than your average joystick, but in principle they are the same.

It's the other way around, we play video games with aircraft style joysticks.
The games industry looked at aircraft and basically took those designs as inspiration for their products, in no small part because a lot of those games were about controlling flying aircraft and spacecraft and it'd be more immersive to have controls looking (somewhat) like the real thing.

Of course there is a massive variety of joysticks out there, but the most serious ones aimed at high end gamers still look like modern day fighter sticks to this day.

I think the other answers are missing something. I think the OP is asking about a single control input, rather than having a joystick (or wheel) to control ailerons & elevator, and foot pedals to control the rudder. Perhaps with some linkage to automatically maintain coordination, like IIRC the Ercoupe.

One reason is that in light aircraft at least (I have no experience with commercial) you sometimes want NOT to be coordinated, as for instance when you're doing a sideslip to lose altitude/airspeed for a short field landing.

Joy sticks and control yokes are traditional for full size aircraft for very functional reasons going back to the dawn of flight. All of the pre-WWII aircraft were controlled by direct mechanical linkage. the is moving the stick or control column for and aft pulled on cable that moved the elevator up and down. Moving the stick or wheel (yoke) side to side caused one aileron to go up and the other down. The ruder pedals were on a toggle or t bar connected to the rudder cables and directly moved the rudder left and right. The larger the plane the larger and more stressful the movements were as the aerodynamic forces on the controls (back pressure) increases with the aircraft's size and speed. This is the original reason multi engine bombers and cargo planes started having co-pilots. In bad weather it might take the strength of 2 men to handle the controls. By WWII planes were so large and fast that hydraulically boosted controls were needed. Think of these like the power steering or brakes on your car. Large movements were needed to open and close the valves and allow the hydraulic fluid to flow and move the controls. The first production aircraft that did not have a mechanical connection between the pilot ant the control surfaces was the General Dynamics F-16 (1979 - present). The F-16 is a side stick "fly by wire" design were the pilot tells the computer what he wants to do, and the quad redundant digital computers figure out what control surfaces need to move to achieve this. It also prevents maneuvers that would exceed certain safety parameters. Since planes are durable and stay in service for decades, familiar patterns of instrumentation and controls last for decades with few changes.

9
How does the pilot control the Dassault Rafale?

10
Has any aircraft ever been designed such that it could descend safely with no control input?
3
Is the aft position the ideal place to fly a large aircraft from?
10
Why don't we fly helicopters with yokes?
9
Are there any supersonic aircraft with strictly mechanical controls?
4
Can an F-16 fly with conventional hydraulic powered controls without a computer controlled Fly By Wire System?
15
Can an airplane fly with on-off control surfaces?
0
Why don’t large aircraft (larger than ~737-size) have even partial manual-reversion capability?
6
Why does the A320 use the rudder for lateral control in mechanical law?
2
What is the heaviest aircraft fitted with a central control stick?