What does %MAC mean?

A document said that the optimum CG position is from 13% MAC to 33% MAC. I'd like to know what that means, and what would this look like on an actual plane.

%MAC (Percent Mean Aerodynamic Chord) is a mathematical calculation that shows where the center of gravity is over the wing. The calculations is rather straight forward and the generic formula is the same for all airplanes. All one has to do is to figure out the numbers and plug them into the formula.

How is %MAC calculated?

Pilots, dispatchers or load masters will calculate the weight and balance with respect to the aircraft datum. Unfortunately, we need to change where the reference point is from the (datum) to the front of the wing called leading edge mean aerodynamic chord (LEMAC). There is also a trailing edge mean aerodynamic chord (TEMAC) that is calculated. TEMAC - LEMAC = Wing width.

LEMAC and TEMAC are easy to calculate for straight wing aircraft. It is simply the measurement from where the wing starts and ends from the datum. For swept-wing aircraft it isn't that simple. As a result, aerodynamic engineers figure out where the average of the LEMAC by averaging the wing root and wing tip. The same process happens for calculating TEMAC.

In the picture below, we can eyeball the %MAC to be around 10% MAC. 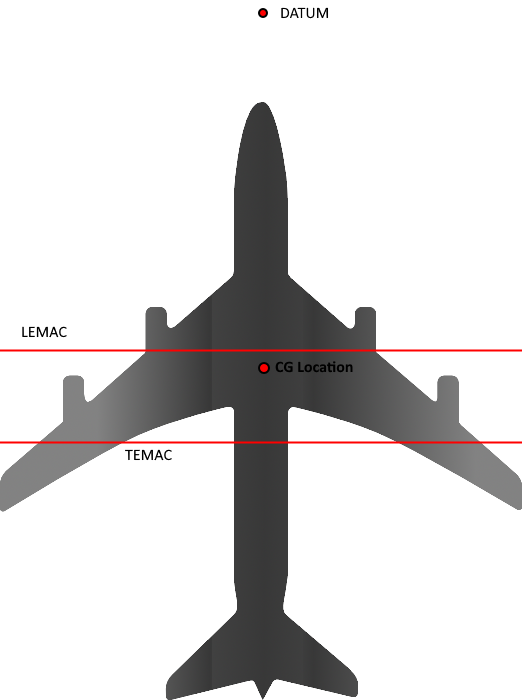 Here is the generic formula:

The formula is great because all the numbers are relatively the same for every airplane. For example a 13% MAC means that we are most likely at or close to our forward CG limit. This should instantly give the pilot a sense of how the airplane is going to respond versus a pilot trying to comprehend what a CG of 2,341.0 inches aft of datum means for that particular aircraft. The last number can be different for every aircraft type but 13% MAC will be the same. The only difference is where the forward CG limit is located for that particular aircraft.

A little background, and perhaps an engineer can expand on the thought. The basic weight and balance formula is $ \mathrm{Weight} (W) \times \mathrm{Arm} (A) = \mathrm{Moment} (M) $. What may not be obvious is that we can use this formula in figuring out why %MAC is important.

As @abelenky points out in his comment, it is the Mean Aerodynamic Chord of the wing. This is not exactly the mathematic mean of the wings' chord, but a size which includes the damping effect of a pitching wing which scales with the square of its chord. The % part just shows that this length is given as a percentage of the mean aerodynamic chord.

Next, you need a location for this length unit. This can be the actual MAC location of the wing, other aircraft use the leading edge of the wing root as the lengthwise zero point. All measure distances in their own coordinate system, positive backwards. The airplane manual should give an exact definition how to measure the correct CG location.

If the actual CG location falls within the range given by both numbers, you are safe to go. If the CG is forward of the smaller number, your control authority might not be sufficient, the pitch control forces will be too heavy for comfort and both your rotation speed and your stall speed go up. If the CG is aft of the bigger number, your static stability is too small or the airplane might even be unstable. Also, pitch control forces will be very low so you run the risk of damaging the aircraft with too large control inputs.

A document said that the optimum CG position is from 13% MAC to 33% MAC.

A possibly better phrasing of that statement is that the "allowable CG position is..." or some such. Typically the term "optimum CG position" is used not for a range but for a given CG position that optimizes whatever you wish to optimize. Usually for transport category aircraft it's used to refer to the target zero fuel weight CG that produces the best fuel economy.

As it happens, the range 13% MAC to 33% MAC are typical landing CG limits of 747s as well as the zero fuel, taxi and takeoff limits at low weights. An often used value for the optimum zero fuel weight target for best fuel economy is 26.6% MAC. Forward of that value would mean you'd burn more fuel, aft of the value you'd burn less fuel but would be starting to have undesirable effects that outweigh the fuel economy.

If you wish to see a graphical display of such limits, go to 747.terryliittschwager.com, select any aircraft, and when the aircraft page comes up, scroll down to the OPERATING ENVELOPES at the bottom of the page. If desired you can add fuel and cargo and see how it affects the CG.

Not the answer you're looking for? Browse other questions tagged weight-and-balance cg or ask your own question.

12
What is the coordinate system used in an Aircraft?
7
Why is the static margin expressed as percentage of the MAC?
2
How is %MAC affected by flap/slat position on swept wing, transport category aircraft?
0
Which moments are acting on a flying airplane?

9
What are the limits to lateral Centre of Gravity imbalances?
1
What is the explanation for the different lines in the payload/range diagram for the Airbus A320?
7
How do pilots of small planes know where to move people?
10
What is a good spin aircraft for someone that is heavy?
4
Sensitivity of aircraft stability with respect to the CG location
2
What if all passengers move from one side to the other?
3
Why is the CG envelope wider when the aircraft is heavy?
17
Is the Centre of Gravity moved by an aircraft travelling at “High Speeds”?