Why do these tail-sitters not have bigger propellers in their main engine?

My attention was called to tail-sitter aircraft, like these two: 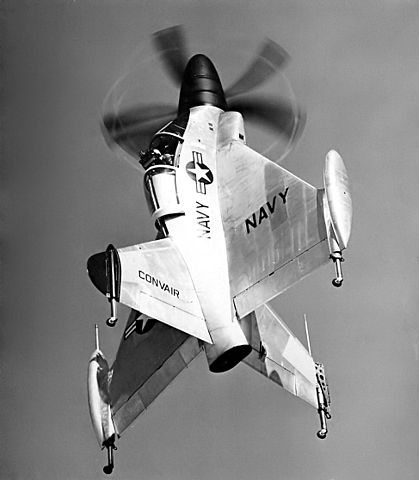 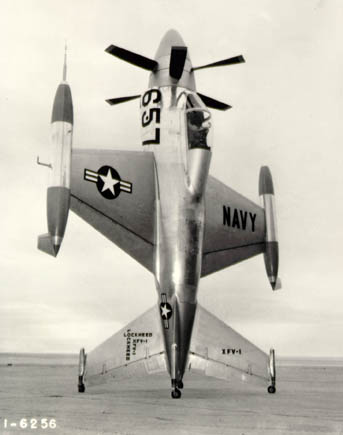 These aircraft land on their tails but transition to normal flight during cruise.

But what I want to know is, why are the propellers so small? Disk loading is a big part of efficiency. That's one reason why helicopter blades are so big. It is more efficient to accelerate a large mass of air to a slower velocity than a small mass of air to a faster velocity.

As far as I know, the disk loading factor is valid for propellers in horizontal cruising too.

So why aren't the propellers any bigger? They have plenty of room at the nose. No worries about ground clearance. I would think for a helicopter-like takeoff, this puts a lot more strain on the engine and thus efficiency would be even more important than usual.

You're correct that it is more efficient to accelerate a large mass of air to a slower velocity. But then there are other things to consider here:

In the end, use of smaller rotors would've been influenced by a much more mundane reason- availability of powerful engine. Note that both of these aircraft were powered by variants of the same engine- modified Allison T40 turboprops, the only engine rated for vertical takeoffs and landings available- which consisted of two Allison T38s lashed together to run the same gearbox with contra-rotating propellers.

In fact, the heavier Lockheed XFV never made the transition flight, waiting for a higher powered T-40 and did only horizontal flights with long landing gears (which would've precluded using higher diameter rotors- though I'm not sure if that was a consideration).

29
What are the advantages of more than 4 propeller blades?

22
Why do most single propellers have a clockwise rotation?
35
Why do propeller blades not have winglets?
38
Why increase the number of cylinders in an engine instead of increasing their volume?
15
Why do propellers on aircraft have a slight offset angle?
5
Do any propellers/propfans use stator vanes? Why is this not a commonplace feature?
8
Why aren't large, low-speed propellers widely used?
1
Does counter-rotating propellers on multi engine airplanes have critical engine?
1
Why does disk loading mean anything when rotors/propellers are not disks?