If indicated air speed does not change can the amount of lift change?

A friend and I were having a discussion. He says that if you are flying in a 50 knot headwind and the wind suddenly stops, the airplane will lose lift.

I say that this will not result in a loss of lift because, although the ground speed will change, the indicated airspeed does not change and no lift will be lost.

He then brought up microbursts and wind shear as an example of wind direction changing causing a change in lift, however I am not so sure. I think in those examples it is actual downdrafts pushing the plane down or the movement of air over the wing in a non-coordinated way, similar to how the air in a slip does not pass over the wing in a way that generates the most lift.

Does anyone have an answer? If an airplane is in a 50 knot headwind and the wind suddenly stops, will the airplane lose lift? What is the actual cause for loss of lift in a microburst or in wind shear?

Your friend is right. Wind shear will greatly degrade or increase the lift depending on the change in direction and velocity of the shear.

If you are flying at 50 KIAS into a 50kt headwind, your ground speed will be zero knots. If the wind shears to perpendicular to your flight path, your airspeed drops to zero knots and you fall out of the sky. If it shears to 180deg in, says a microburst your airspeed is now -50kts or 50kts from the tail end almost certainly causing a departure from controlled flight. In both cases at low altitudes the result is almost certainly fatal.

Conversely, if you were flying at 50KIAS and had a 50kt tailwind and the wind then sheared 180deg to a 50 kt headwind, you would abruptly jump to an airspeed of 100KIAS. The airplane would rise very rapidly; you would feel the vertical acceleration in your seat. This situation isn't as dangerous as shearing to a tailwind at low altitudes/speeds but it could be dangerous if one was cruising past Vno (yellow arc) where there is a risk of structural damage to the aircraft.

Your friend is right; microbursts are very dangerous. The combination of wind shears as much as 90kts and severe downdrafts in the apex of the storm make it one of the most hazardous weather phenomena an aircraft can encounter. They can even be catastrophic to large airliners at low speeds. On August 2, 1985, a Lockheed L-1011 TriStar encountered a microburst while on final for KDFW and consequently crashed, killing 137 people.

The lift equation uses relative velocity through the air, which is the true airspeed (TAS), for the purposes of this question, we'll assume IAS equals TAS.

If your IAS is showing 50 knots, and the ground speed is showing 0, that means there's a 50-knot headwind.

If the wind would to disappear, for whatever reason, lift will be lost. And the IAS will read zero.

As far as lift is concerned, it depends on the speed of the aircraft relative to the air surrounding it. The lift equation,

uses the true airspeed. This is the actual flight speed of an airplane relative to an air mass i.e. the atmosphere.

If an aircraft is flying into a 50-knot headwind, which suddenly stops for some reason, the lift will be lost (by an amount proportional to the square of the reduction in speed). 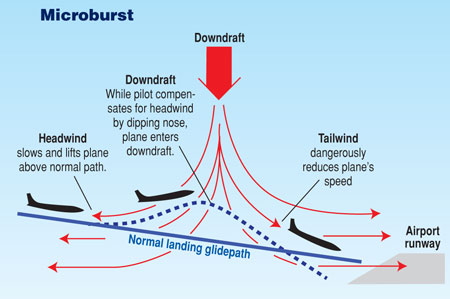 From the NASA page on windshear and microbursts:

Windshear is a generic term referring to any rapidly changing wind currents. A type of weather phenomenon called "microbursts" can produce extremely strong windshear, posing great danger to aircraft. These are local, short-lived downdrafts that radiate outward as they rush toward the ground.

As a downdraft spreads down and outward from a cloud, it creates an increasing headwind over the wings of an oncoming aircraft. This headwind causes a sudden leap in airspeed, and the plane lifts. If the pilots are unaware that this speed increase is caused by windshear, they are likely to react by reducing engine power. However, as the plane passes through the shear, the wind quickly becomes a downdraft and then a tailwind. This reduces the speed of air over the wings, and the extra lift and speed vanish.

Approaching this from a physics point-of-view, it seems to me, that -

Note that the engines are propelling the aeroplane at say 200mph relative to the wind. The lift is based on this airspeed. However, a aircraft has a substantial inertia, which is relative the the ground (actually to the Universe, but the ground is a good substitute). If the wind drops from 50mph to zero, then the ground-speed will remain at (200-50 mph), but the airspeed will fall from 200mph to 150mph. The lift will then drop appropriately.

The answer is yes.

Essentially the formula to obtain lift is the following:

Where $$C_L$$ is the lift coefficient, which (in a simplified description) only depends on the configuration of the airplane (i.e. deploying flaps).

The density depends on the flying height and, to answer your question, the speed is the relative speed to the air.

That means, in the case of sudden change of external air speed it will change the relative speed (unless the airplane does not steers to compensate), so that the lift will change (decrease in this case).

A microburst brings increase and decrease of air speed reducing and increasing the lift. Wind shear will depend, but might increase of decrease speed depending on how affects.

But the most dangerous effect is stall. The lift increases with angle of attack only to a certain value, called critical angle of attack, when the wing will stall, which is accompanied by increase in drag and reduction of lift.

As the airspeed decays (due to downburst or windshear), the pilot will compensate by increasing the angle of attack to maintain the needed amount of lift. But if the airspeed drops too low, the angle of attack will exceed the critical angle, the wing will stall and lift will be lost. And due to the significant increase in drag, just adding engine power is generally not enough—the plane must pitch down and accelerate by trading some altitude for speed. Low above the ground the plane may not have enough altitude for this, which is why downbursts are so dangerous on approach and weather that generates them must be avoided.

1
Why do gusts change the airspeed during landing, but turning (which changes where the wind is coming from) does not?

5
For a large commercial plane on landing, does the L/D ratio increase, decrease, or not change much?
3
What are the effects of the tilted lift vector in a banked plane?
6
Why is it advised to turn the aileron away from quartering tail-wind during taxiing?
3
Why changes the lift during turning with sidewinds? Why is there relative wind in the wind-frame?
8
Just how do the underbanking and overbanking tendencies work?
5
How changes in Air masses, Air flow direction and intensity affect lift?
0
When do the lift and drag vectors contribute a force component along a glider's path of travel as seen from the ground?
2
Why does the NASA X-57 need a “gust control system”?
2
Is the turning motion of a banked airplane caused by true centripetal force?