How do pilots clear an aircraft to fly through a hurricane?

This video shows a pilot (Tim Gallagher/NOAA) flying what looks like a small jet into the eye of hurricane Matthew by Miami. It's clear that it is quite an interesting ride. The (small) caption states that the purpose of the trip is for "scientific research". I naïvely imagine that the research in question is the gathering of an idea of the velocity field, pressure, atmospheric aerosols, humidity, and spectral density/radiative transfer rates between different "parcels" of air within the large and complex structure in three dimensions. I'm a physicist, but not an atmospheric physicist, so I'm not entirely sure why you would undertake such an expensive and potentially dangerous trip like this.

As a result, I've got two questions:

Here's a screenshot from the video, showing the sort of large wind/water flow the aircraft is experiencing; it's quite dramatic! 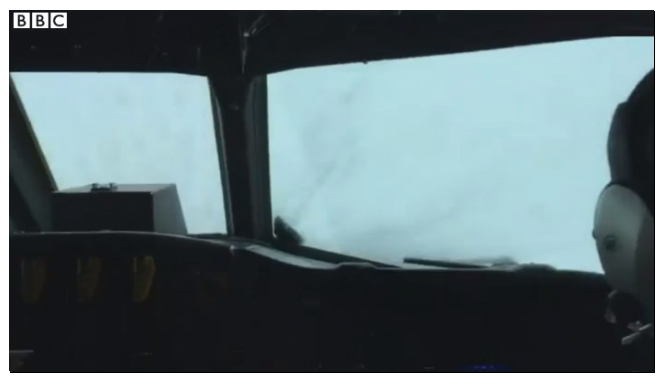 The aircraft they're flying is an Lockheed WP-3D Orion, not a jet- the NOAA doesn't fly its Gulfstream IVs into the storm, as I've noted elsewhere.

There is always a risk associated with piloting an aircraft through weather that pilots are usually told to avoid. But they have been doing it for decades, so, with proper training and planning, it appears that it's not that risky. The top speed of the WP-3D is listed as over 750 kmph. The $V_{ne}$ would definitely be over that. The top wind speeds in Category 5 hurricanes (the highest in the Saffir-Simpson scale, of which Matthew is one) are over 250 kph, though most hurricanes aren't quite that strong.

The NOAA seems to be aware of this issue; in this reddit AMA, they agree that wind shear could damage the aircraft and lead to loss of control:

Planes are generally not destroyed by strong winds while in flight. Airliners routinely fly in jet streams with winds exceeding 150 mph over the U.S. during the winter. It's the shear, or sudden change in horizontal or vertical winds, that can destroy an aircraft, or cause its loss of control.

However, with proper training and by avoiding the most dangerous areas using real-time data, they can fly the aircraft within the safe limits.

NOAA pilots and crew routinely fly in the high-wind environment of the hurricane and don't fear it tearing the plane apart. However, they are always monitoring for "hot spots" of severe weather and shear that they can often identify on radar and avoid if it's too severe.

The aircrew has things to worry about other than $V_{ne}$- the high velocity winds in the up and downdrafts can result in high 'g's, while the wing is susceptible to flutter in these conditions. This blog chronicles cases where the mission was abandoned due to aerodynamic flutter and a case where nearly 5.7 'g's were experienced. Another blog describes the penetration of Hurricane Hugo, that resulted in a near fatal disaster and grounding of the aircraft. From hurricanescience.org

As they flew through the storm’s ey(e)wall they encountered sustained winds of 297.7 km/h (185 mph) (gusting to 315.4 km/h [196 mph]) and extreme updrafts and downdrafts (32-72 km/h [20-45 mph]). The massive jolts rocked the aircraft, causing gear such as tools, computers, all items in the galley, and even the 200 lb life raft to be dangerously thrown about the aircraft’s interior. The cockpit gravitational force(G)-meter, became pegged at 5.6 G's and -3.9 G's . Upon reaching Hugo’s eye, one of the engines exploded and had to be shut down. In the calm of the hurricane’s eye, the plane made repeated circles, a risky maneuver with the loss of one engine. NOAA 42 was able to successfully exit the hurricane ...

The crews also take some safety measures, such as flying at higher altitudes (UAVs are used at lower altitudes) to reduce the associated risk. As every hurricane is different, risk assessment is difficult and the crew has to fly sometimes based on imperfect information. From hurricanescience.org:

Flying into the eye of a mature hurricane presents significant hazards as strong updrafts in the hurricane’s eyewall can give way to equally strong downdrafts on the measure of a few hundred feet. Horizontal wind speeds can also change by more than 161 km/h (100 mph) in a few seconds of flight time as the plane moves through the eyewall, putting strains on the airplane and its crew. Because of these hazards, Hurricane Hunter flights are typically done at 10,000 ft (3,048m).

There are two types of flights these aircraft are used for- reconnaissance and research. While satellites may give quite a bit of data, there are some things they can't provide and can be obtained only by flying into the storm. The main purpose of reconnaissance flights is to track the center of circulation and gather data, which will help determine the threat posed by the hurricane and the path it will take. NOAA notes:

The primary purpose of reconnaissance is to track the center of circulation, ... , and to measure the maximum winds. But the crews are also evaluating the storm's size, structure, and development ... . Most of this data, which is critical in determining the hurricane's threat, cannot be obtained from satellite.

The research flights are for varied purposes such as to gather data about the structure of the storm and its interaction with environment, which will help them predict future hurricanes better. In fact, in the above mentioned flight into hurricane Hugo, the crew observed a long suspected phenomenon for the first time, which would not have been possible using satellites:

Later analysis of the data taken during our amazing flight into Hugo revealed that we hit a tornado-like vortex embedded in the eyewall when the hurricane was at its peak intensity. These eyewall vortices had been suspected but never before observed, and ongoing research suggests that similar vortices may be responsible for some of the incredible damage hurricanes can inflict when they strike land.

While it is true that it is possible to drop probes while overflying hurricanes, it is not always possible- some of the larger ones have cloud tops reaching over 50,000 ft, higher than the ceiling of aircraft available (for example, the cloud tops of Hurricane Matthew reach over 16km), making it quite difficult to drop dropsondes and the data is relayed to the aircraft which then transmits to the center using satellite.

In recent times, UAVs are being used increasingly for this purpose (NASA uses a Global Hawk for this purpose) and, maybe, in the future, they'll replace the manned aircraft altogether.

Not the answer you're looking for? Browse other questions tagged safety wind meteorology or ask your own question.

20
How does NOAA's P3 Orion safely navigate hurricanes?
2
Has any pilot successfully flown through a hurricane with a single-engine prop plane?

20
How can pilots fly VFR over-the-top in overcast conditions?
8
How does an organization decide to evacuate planes (e.g. in a hurricane)?
2
Are planes allowed to fly through a planned professional fireworks display?
16
How often do pilots fly drunk?
8
Can pilots tell if a cloud or fog is made out of water droplets or ice crystals when flying through it?
35
How long to clear the 'suck zone' of a turbofan after start is initiated?
6
What safety issues led the FAA to ban Constellation flights into/out of the U.S.?
1
Why don’t flying-boom tankers have collapsible/frangible/breakaway refuelling booms?
13
Were propeller airplanes significantly more "scary" to fly in compared to modern jet ones?