Inviscid aerodynamics: why is circulation zero at the wingtip?

Prandtl's lifting line assumes that the form of the solution for its equation is similar to an elliptical solution with small variations.

Which, essentially, assumes that the circulation at the tips is 0, so the tip is not producing lift at all in any assumemd solution. The theory assumes that the tip pressure difference is 0 and actually no speed normal to the surface.

This theory explains that the drag due to lift is NOT a drag produced at the tip, is drag of the complete wing as a single element and the tip vortex is not produced at the vortex, is produce down the wing due to the circulation variation along the wing.

Which drives the typical picture (via helicel) 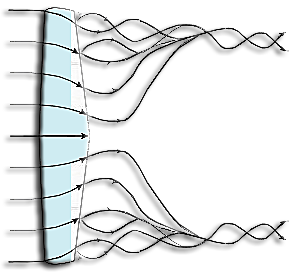 11
Does the downwash created by induced drag increase or decrease lift?
7
Why does the vortex created by wing affects its own angle of attack?
6
Why is induced drag less on a high span wing?
8
Is induced drag not caused by tip vortices?
9
Is there a physical argument for the Kutta-Joukowski theorem?
10
Why do wall-to-wall airfoils in wind tunnels produce no (or infinitesimal) downwash?
2
How do endplates reduce induced drag?
1
Why do wingtip vortices affect the upwash ahead of the aerofoil?
2
Does an airfoil in supersonic flow have zero circulation?