Why is there a maximum altitude to restart a jet engine? 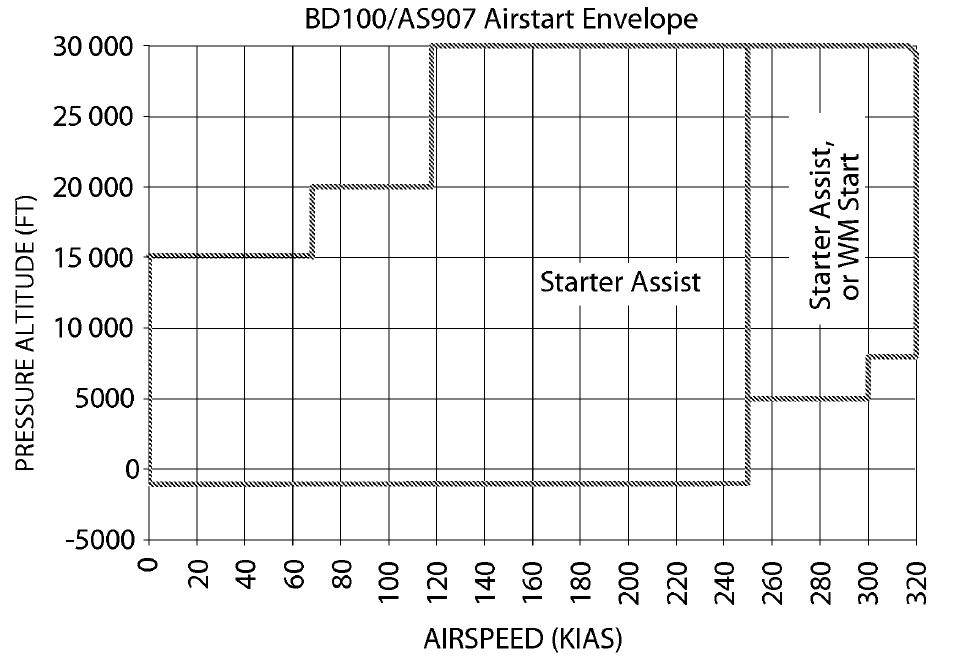 Basically, it gives the pilot the altitude and airspeed at which the engines can be relighted in flight. Based on these values, the pilot has to take a decision to descend etc. A jet engine requires (compressed) air, fuel and a flame source for (re)starting. So air density plays an important part in determining the maximum restart altitude.

In addition, there are other factors at play as well. In case of unassisted (without APU, for example) windmill restarting, the airspeed must be enough to overcome the inertia of the components. In certification memorandum on Turbine Engine relighting in flight, EASA says,

In case a starter is available, the airspeeds required go down (as APU itself is usually a small turbine, the altitude effects are not as pronounced). According to CFR § 25.903 Engines:

(2) An altitude and airspeed envelope must be established for in-flight engine restarting, and each engine must have a restart capability within that envelope.

The engine restarting envelope is decided both in terms of altitude and airspeed. It also depends on aircraft. For example, in ETOPS aircraft, the APU must be designed to have airstart capability throughout the normal flight envelope. Regarding this envelope, EASA says,

2 Envelope of Altitude and Airspeed

2.1 Sufficient flight tests should be made over the range of conditions detailed in 2.2 and 2.3, to establish the envelope of altitude and airspeed for reliable engine restarts... The effect of engine deterioration in service should be taken into account.

2.2 Altitude and Configuration. From sea-level to the maximum declared restarting altitude in all appropriate configurations likely to affect restarting, including the emergency descent configuration.

Like most chemical processes, combustion becomes easier and faster with higher pressure. The combination of speed (which provides ram pressure) and altitude (which provides atmospheric pressure) must result in sufficient pressure in the combustion chamber. That is the reason for the stepped altitude limit. If density were the reason, there would not be a need to reduce the maximum restart altitude at lower speed.

For combustion to take place, first the fuel droplets injected into the air stream need to evaporate. This is made easier by higher temperature and pressure, and the lower both are, the more residence time of the fuel-air mixture in the combustor is required for good combustion. Next, the ignition system will add enough activation energy to start the combustion process. When the fuel-air mixture arrives at the ignitor, the fuel must have sufficiently mixed and evaporated for ignition to occur.

In case of the turbojets you have flown the pressure above 30.000 ft will not be sufficient to light the fuel, especially at the low compression ratio of the starter-driven or windmilling compressor.

Not the answer you're looking for? Browse other questions tagged jet-engine engine-failure turbofan or ask your own question.

38
Why do new jet engines cost billions to design?
17
Can high-bypass turbofans cruise at high altitude?
3
Why is there a minimum altitude for at least some high-speed jet engine restarts?

20
What is a "core lock" on an jet-engine?
12
Why is the combustor volume of a jet engine decided by altitude?
6
How does compression ratio change, if at all, from sea level to higher altitudes?
8
During an engine restart procedure, what are the purposes of a.) throttle back to idle and b.) primer "in and locked"?
8
Can a jet engine benefit from nitrous oxide boost?
9
Does engine failure shut off the auto-pilot?
3
Why is there a minimum altitude for at least some high-speed jet engine restarts?
4
Could the Olympus 593 have been windmill-restarted during supersonic flight?