What's required for a plane certified to fly to Antarctica?

What special features besides the obvious long range does a plane have to have to fly to and land in Antarctica? I know not just any plane can make the trip, but I couldn't find many relevant regulations or certification requirements.

It seems like the C-17 and LC-130 are some of the most popular for these flights, based on the "US Antarctic Program Inter-agency Air Operations Manual" and this site. The manual does list other aircraft that can use Pegasus White Ice Runway: "C-5, KC-135, C-17, C-130, LC-130, P-3, A-319, and smaller aircraft". I also know the Basler Turbo BT-67, DeHavilland DHC-6 "Twin Otter" aircraft, and C-141 are traditional polar operations planes.

The only applicable regulations I could find were:

So what special features or parts does a plane need to make an antarctic trip besides long range? Why are c-130's and DHC-6's perfect for this kind of mission?

Note: Obviously pilots also have to have very specific and special training for Antarctic missions, but I'm focusing on the planes themselves in this question. 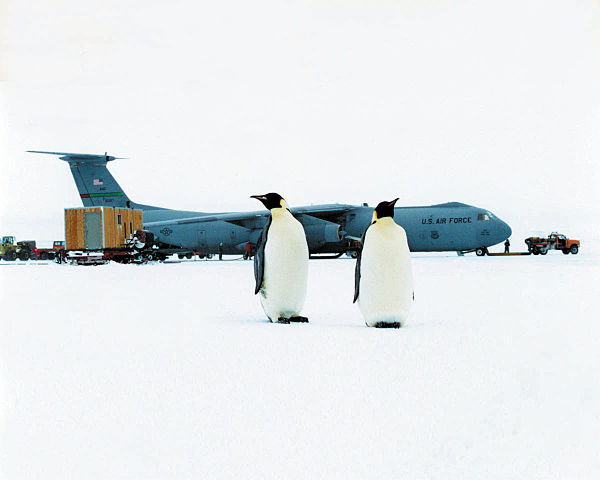 Actually, there are airports in Antarctica that can handle 'conventional' aircraft (atleast seasonally), like the Union Glacier Blue Ice Runway, which has been certified to handle commercial flights. US Army CRREL Report 93-14, Notes on Antarctic Aviation identifies three broad flight categories:

According to the type, the aircraft requirement can vary significantly. For example, for the first case, (long range) civilian and military aircraft maybe more than enough. From the same report:

For flights of the first category, exemplified by Christchurch to McMurdo in springtime, any conventional trans-oceanic transports, civilian or military, should be satisfactory as long as they have adequate useful range, with the ability to reach an alternate or to return to the point of departure, arriving with standard IFR fuel reserves.

For medium-range flights to and from short substandard Antarctic runways with limited facilities, the aircraft can be smaller, but it has to be capable of safe over-ocean journeys, with appropriate range and engine-out performance.

For long trans-ocean flights to and from expedient runways that are rough or soft, the aircraft requires both long range and robust, high-flotation landing gear.

The report also lists the desirable characteristics of aircraft for operations in Antarctica, which should explain why aircraft like C-130 and DHC-6 are used the most:

You can see where this is going. The aircraft used in Antarctica are varied, with anything from C-17 Globemaster IIIs to re-manufactured DC-3s in service, De Havilland Twin Otter being one of the most popular. You can see that most of the aircraft operating from there are high wing aircraft with excellent STOL capability. The report also lists some of the aircraft most suited for operations in Antarctica. 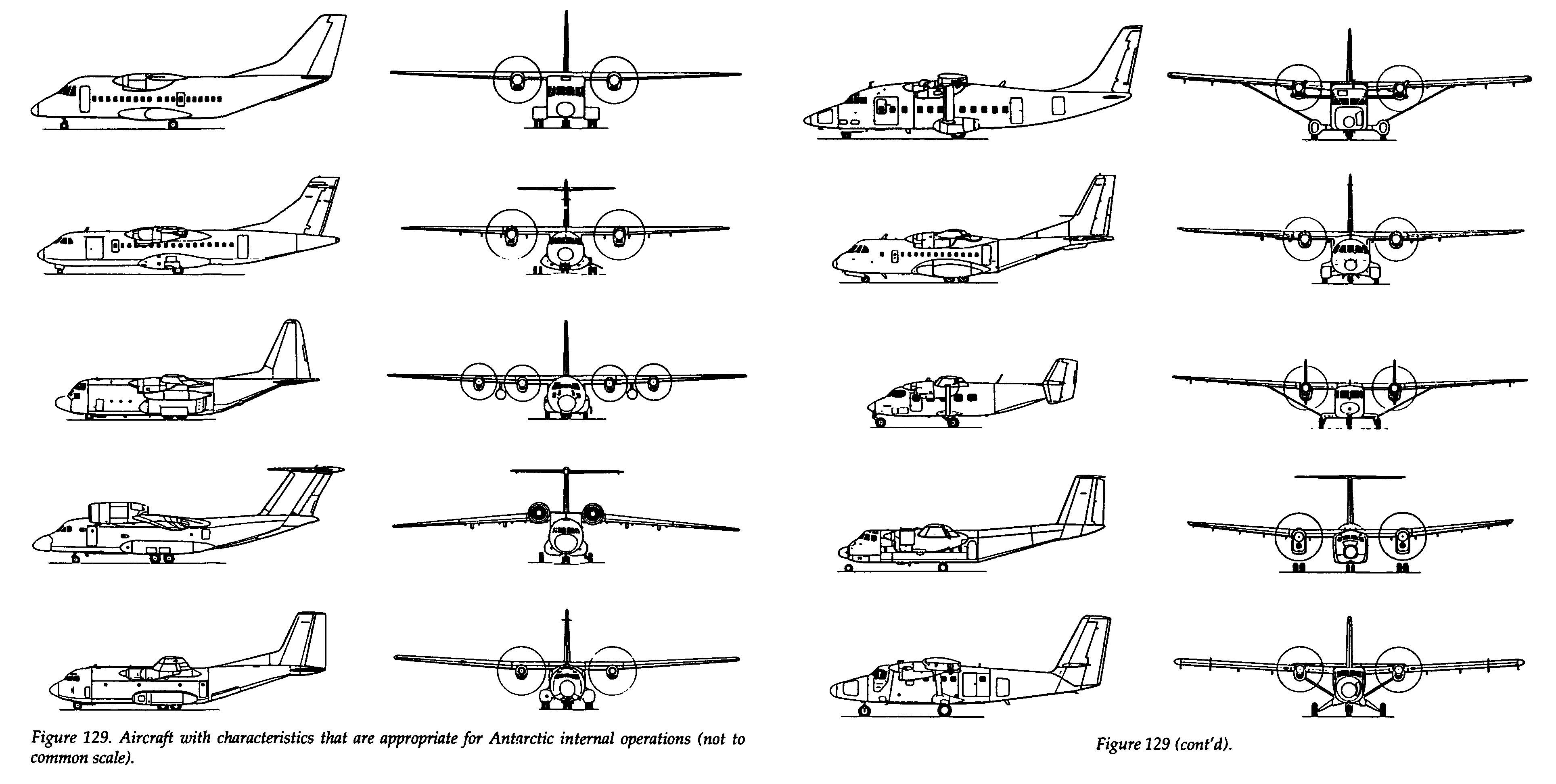 Aircraft with characteristics that are appropriate for Antarctic internal operations; Image from CRREL Report 93-14, Notes on Antarctic Aviation by Malcom Mellor

Most of the aircraft look similar with high wing with wide, short landing gear and multi-engined. Quite a few of these are excellent STOL aircraft too. Obviously, they will be modified with the required navigation equipment and long range fuel tanks (for example, with long range fuel tanks, the range of Basler BT-67 is extended to ~4000 km). 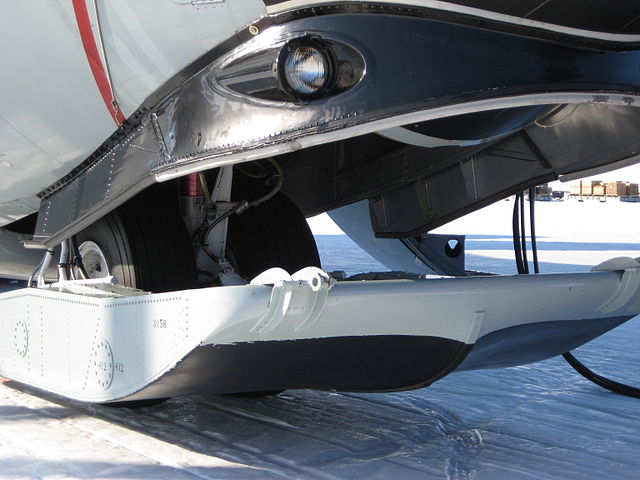 Aircraft operating in Antarctica should also consider the effect of air operations on the fragile and unique environment. The long range of aircraft come in handy as this limits the need for holding fuel reserves at the Antarctic airport, reducing infrastructure requirements and ecological impact.

The aircraft operating to/from Antarctica have, in addition to the usual requirements, items like onboard stairs:

The A319CJ is designed with ultra-long range tanks, enabling the aircraft to return safely to its original port without the need to land and refuel. .... Skytraders limit the need for extensive ground support infrastructure by equipping its aircraft with specialist remote field functions such as its onboard stairs.

Though quite a few types of aircraft can (and have been) operated in Antarctica, it should be noted that not all of them are equal. A good example would be the conclusion of the inquiry into RNZAF Boeing 757 that landed below published minima at Pegasus Field in 2003:

... a whiteout landing. However, in the event of this occurring the likelihood of injury was significantly greater for the Boeing 757, with its long landing gear supporting low-slung engines on a low wing, than it was for the Hercules with its rough-field landing capabilities

This, in addition to the additional navigational aids (TACAN) fitted in the C-13Js. It should be noted that RNZAF still flies 757s to Antarctica.

Not the answer you're looking for? Browse other questions tagged aircraft-design aircraft-certification icing polar or ask your own question.

40
Can commercial airliners fly over central Antarctica during winter?
12
What permissions or approval are needed to land in Antarctica?
4
What is a Polar airplane?

14
What are the FAA requirements for an aircraft to be IFR certified?
15
Can you fly a plane in a wind tunnel?
8
How would you get certified for the AgustaWestland AW609 as a rotorcraft pilot or without any previous certification?
5
Are aircraft separately certified for CAT III ops for +2500 feet elevation?
9
Does every device/software, developed for use in the cockpit, need to be certified?
40
Can commercial airliners fly over central Antarctica during winter?
0
Is DAL-A required for twin-engine helicopters with FADEC?
6
Is a FAA certified plane allowed to fly everywhere in the world?
1
Is it possible to obtain an STC for single-pilot ops in a jet certified for two pilots?
2
Are aircraft certified for inflight thrust reversal required to demonstrate controllability in an asymmetric-reverse-thrust scenario?