How do contrails compare between piston-powered aircraft and jet aircraft?

Based off this question, I got interested on how contrails compare between jet engines and piston powered engines.

Seeing images like these from WWII, I am wondering what the significant differences are in the contrails made by the two different kinds of engines. 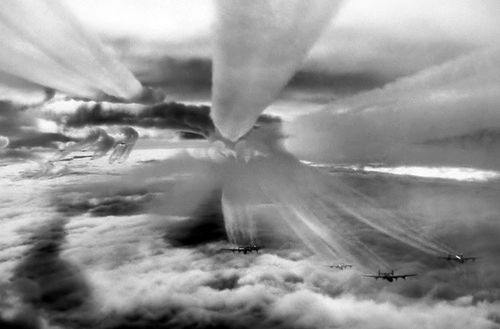 As far as the contrails are considered, there is little difference between the ones formed by different aircraft. Contrails form when the ambient air (which is usually cooler) mixes with the hot, humid exhaust. This usually happens at high altitudes.

One difference may be that the different particulate matter (eg. soot) emitted by both the engines may be different. These particulates act as condensation nuclei for the water vapor at high altitudes. From FAA's Aviation Emissions, Impacts & Mitigation A Primer:

The soot particles at cruise altitudes interact with other chemicals such as sulfuric acid and nitric acid to form small particles that act as nucleating sites for condensation of water vapor present in the upper atmosphere under certain conditions to form larger particles to form condensation trails or contrails, for short.

While I'd venture that the (older) piston engines emitted more of these particulates, the only study i could find online indicates that the particulate emission is similar in case of gas turbine engines and aviation piston engines using unleaded petrol (while significantly higher in case of older, leaded gasoline, as was used during WWII). 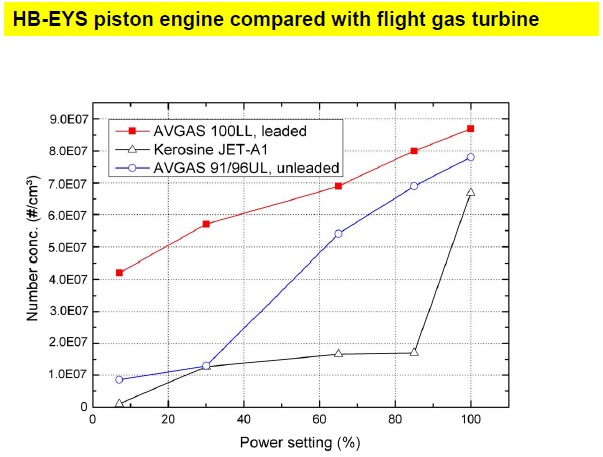 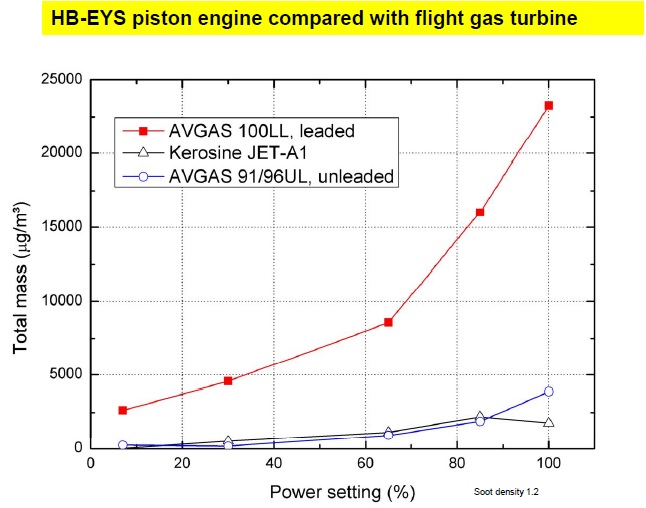 Both images from Microphysical and Chemical Properties of Nanoparticles emitted by Flight Engines by Claus Wahl, Theo Rindlisbacher and Lars Hjelmberg

This would mean that the effect of particulate emissions on contrail formation would've been the same. However, there is another factor- altitude. In general, the (modern) jet engines fly much higher than their piston engines counterparts- the contrails you see in WWII bombers are formed by supercharged engines flying at high altitude to escape from AA defenses. Also, as @ymb already noted, the size/shape and number of exhausts also vary between the piston and gas turbine engines.

Though the mechanism of contrail formation is the same in the piston and gas turbine engines, the difference between them lies in their size/shape per engine and their operating envelope.

I can't find studies comparing both. Same for studies just on piston engine contrails. Most probably such a study during WWII would have been of trivial importance.

So I can just speculate. An individual contrail will be smaller in size due to the exhaust size. But also numerous small ones per engine, based on the number of exhausts.

Those engines were beasts, two-speed two-stage intercooled superturbocharged, so they went through a considerabe volume of air, contributing to comparable moisture as a combustion byproduct.

The exhaust gas was also fast, contributing to condensation as the pressure would drop.

The Merlin consumed an enormous volume of air at full power ... with the exhaust gases exiting at 2,100 km/h—Wikipedia

So, numerous tiny contrails contributing to either a streaked contrail as the images would suggest. Or when the conditions are right, they combine into one contrail per plane.

Not the answer you're looking for? Browse other questions tagged jet-engine piston-engine contrails or ask your own question.

18
How does contrail formation differ from turbofan to turbojet?

28
Do jet contrails impact weather?
23
Why do piston engines in aircraft burn fuel at a higher rate than a comparable car engine?
2
Why are ethanol piston engines apparently cheaper to maintain than avgas piston engines?
17
Why is max endurance different for jet and props?
4
How does engine exhaust temperature affect contrail formation and why?
2
How much extra weight is added by strengthening a piston-prop fighter for carrier landings?
3
Why are piston-engined aircraft generally exempted from U.S. flight recorder requirements?
1
How do I estimate piston aircraft fuel efficiency?
3
How does fuel economy quantitatively depend on altitude for a jet?
16
Can the plane Celera 500L be eight times more fuel efficient than a jet of similar size and capacity?