Why select the transponder to TA only in the case of engine failure?

Part of the 777 engine failure checklist is to set the transponder to TA only. 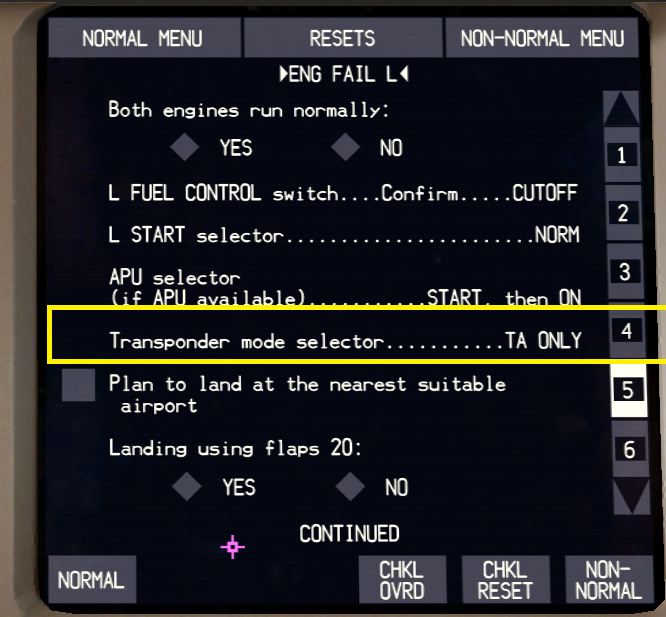 What is the purpose of this step?

The TA mode is selected when there is an issue, basically telling the 'other' aircraft that you cannot maneuver if a RA situation occurs. The other aircraft has to do all the maneuvering (as they can still generate RAs).

In the TA-only mode,the equipment still performs the surveillance function (i.e. it scans for proximate traffic) but it will only generate TAs. Other TCAS II aircraft can still generate uncoordinated RAs against the aircraft which has its TCAS II in TA-only mode.

The TA-only mode may be explicitly specified in operating procedures as a response to in-flight malfunctions such as an engine failure with consequent aircraft performance implications or a pressurisation system failure followed by an emergency descent.

Not the answer you're looking for? Browse other questions tagged boeing-777 emergency-procedures or ask your own question.

23
How are fly-by-wire airliners controlled in case of complete electrical failure?
8
How can an airline flight crew handle an in-flight oxygen system fire?
7
Should you immediately attain max glide speed after engine failure?
3
Why isn't the application of “carb heat” in initial piston multi-engine failure emergency procedures?
3
What is the A320's procedure for dual engine failure at very low altitude?
17
On an engine failure, can I contact the tower instead of 121.5?
5
Why would one want to slow to V2 following an engine failure during takeoff?
1
B777- In emergency mechanical back up how does the flight controls manage engine failure
4
Engine options for the 777-300ER: GE90-110B1 or -115B?