How does contrail formation differ from turbofan to turbojet?

Air forces and intelligence agencies are indeed interested in predicting whether condensation trails (contrails) will be visible or not during aircraft operations.

Among existing prediction algorithms, Appleman's method, devised in 1953, is frequently cited, even if more accurate or refined algorithms exist, like JETRAX.

From Predicting Contrails Using an Appleman Chart (Nasa), the principle is based on air saturation characteristics:

At first, scientists were not sure how contrails formed. We now know that they are a type of mixing cloud, similar to the cloud that sometimes forms from your breath during a cold winter day.

Appleman showed that when the air outside of the airplane is cold enough and moist enough, the mixture of the jet exhaust and the air would form a cloud.

Appleman chart, with a different layout

Since 1953, civil turbofans have replaced turbojets, with various air bypass ratios. What is the effect of this replacement on the occurrence of contrails?

It appears that the higher bypass engines available today increase the contrail occurrence. From Influence of propulsion efficiency on contrail formation by Ulrich Schumann:

The thermodynamic analysis, which is the result of first-principle arguments, implies that aircraft and engines, performing with a higher overall propulsion efficiency release a smaller fraction of the combustion heat during cruise into the exhaust plume, and hence cause plume conditions which during mixing reach higher relative humidity for the same ambient temperature and hence form contrails also at higher ambient temperatures.

TO test the theory, a flight test was conducted between two aircraft with low and high bypass engines:

For a direct test of the theory, a formation flight of two different large jet aircraft was arranged, wing by wing, during an ascent and a descent f the aircraft. Contrail formation and ambient conditions were observed simultaneously from a research aircraft.

The two contrail forming aircraft were

The results indicated that contrails were formed in more instances in case of the A340 (with higher bypass engines) compared to the B707. 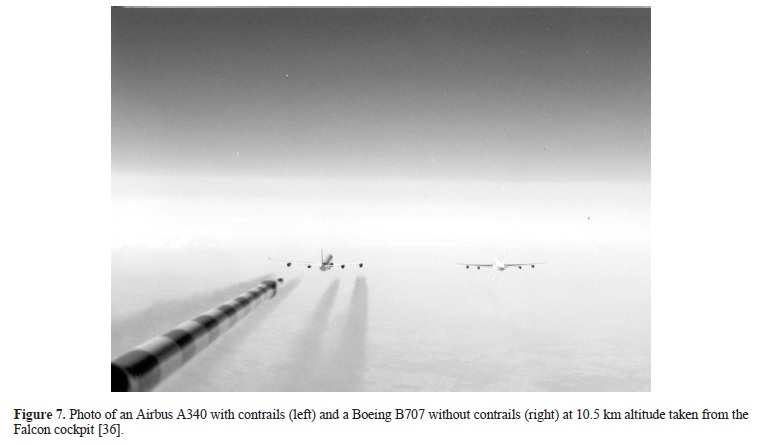 Photo of an A340 with contrail and B707 without one. Image from Influence of propulsion efficiency on contrail formation by Ulrich Schumann

Ambient conditions were measured and the contrail formation was observed from a research aircraft flying less than 1 km behind the two contrail forming aircraft. As documented in several photos, an altitude range exists in which the A340 causes contrails while the B707 causes none.

Though the sample size is pretty small, it does appear that the high bypass engines used in modern commercial aircraft are more prone to contrail formation compared to the older turbojets.

This 1993 study—New Techniques for Contrail Forecasting—looked into the different bypass ratios. The study shows graphs for each bypass type that was tested. Here are two of them, low- and high-bypass: 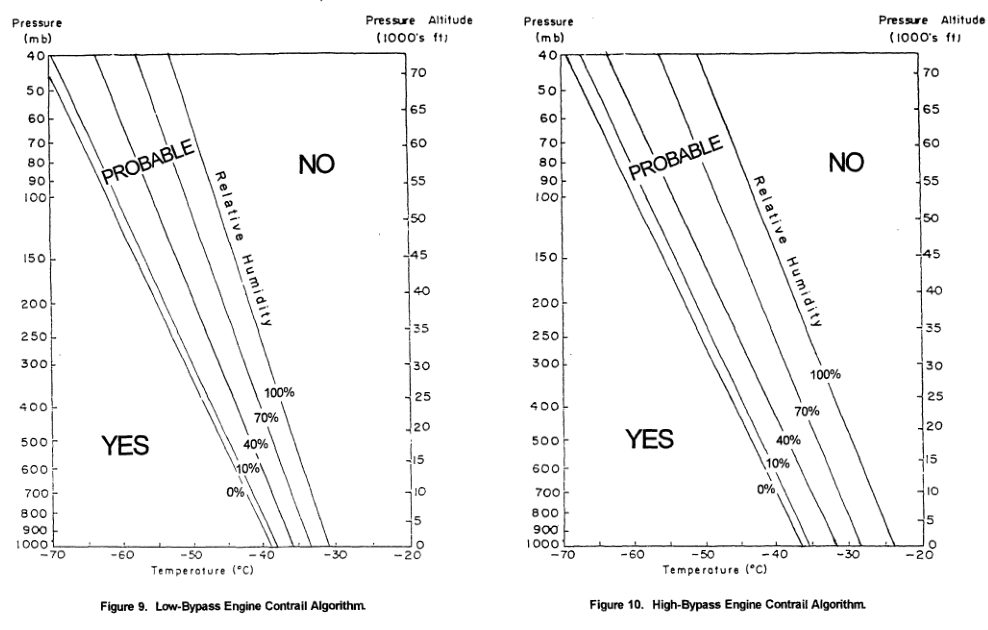 It seems the high-bypass contrails form at warmer temperatures, and a wider range. It makes sense, the high-bypass will encapsulate the exhaust, giving it more time to condense before dispersing, plus cooling it. Further saturating the air with moisture.

So, it's the mixing effect plus more fuel used, i.e. the higher fuel burn of a high-bypass equals more moisture that will saturate the air, assisted by the bypass cooling.

From the comments below (thanks to Peter Kämpf), there might be one more factor worth mentioning, soot. Modern engines probably eject much finer soot particles, which would act like condensation nuclei.

The main products of hydrocarbon fuel combustion are carbon dioxide and water vapor. At high altitudes this water vapor emerges into a cold environment, and the local increase in water vapor can raise the relative humidity of the air past saturation point. The vapor then condenses into tiny water droplets which freeze if the temperature is low enough.—Wikipedia

The findings should give military operators better predictions for contrail formation.

62
How can a two-engine B787 create three contrails?
22
Why are only some aircraft in this formation creating contrails?
4
Have contrails ever occurred at low altitudes, such as at takeoff?
4
How do contrails compare between piston-powered aircraft and jet aircraft?
4
How does engine exhaust temperature affect contrail formation and why?