How do modern avionics work without vacuum pumps or gyroscopes?

I'm going to be taking my checkride soon on a Skycatcher 162. It has an all glass cockpit utilizing the Garmin G300, and its my understanding that it does not utilize gyroscopes or vacuum pumps for any of its instruments.

Seeing that if I were in something like a Cessna 172L, which uses both gyros and vacuum pumps for many of its instruments, questions such as "how does the attitude indicator work?" are fair game, I assume that the same questions are fair game for avionics like the Garmin G300.

The problem, I don't know how they work and its looking like the top google result for "garmin g300 gyroscope" returns a 404 error.

Also, do digital pitot/static systems work in essentially the same way as the old school ones in planes like the C172L? I'd hate to tell my examiner anything along the lines of "I have no idea".

If you haven't already done so, you should have a look at section 7 of the C162 POH. That section gives an overview of all the aircraft's systems and the information is at a good level of detail for a checkride (at least at the private level). The examiner isn't expecting you to explain how a ring laser gyro works, but he probably will expect you to be able to give an explanation like this (from the POH):

The ADAHRS provides airplane attitude and flight characteristics information to the G300 displays integrated avionics units. The ADAHRS unit, located behind the instrument panel, contains accelerometers, tilt sensors and rate sensors that replace spinning mass gyros used in other airplanes. The magnetometer, located in the tailcone, interfaces with the ADAHRS to provide heading information.

The G300 Pilot's Guide goes into more detail about the system's components (see Section 1), although it's still at a fairly high level.

Looks like the following link takes you to the G300 user manual. You'll find your answers here, and this document would be a good one to be familiar with for exactly the sorts of questions you're anticipating.

The short answer is, the G300 has, instead of mechanical gyros, an AHRS -- "attitude and heading reference system", which is essentially an INS but without the navigation function. And, the same unit also includes an air data computer to process the pitot/static inputs. So, "it's all done in the GSU-73" -- GSU standing for Garmin Sensor Unit. 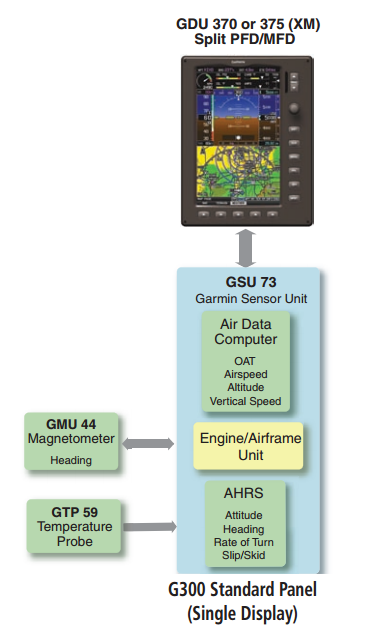 There is more in the linked document on this, and the more comfortable you are explaining it, the better. Hopefully, though, nobody will ask you to explain "how to build" the GSU! But having a good idea of what components are in the system, what each does, and what the expected (possible) failure modes are, is probably fair game.

I can't say for certain what is actually inside a G300, but it seems likely that it uses a set of MEMS solid-state gyros, accelerometers, and magnetometers to sense

Using these inputs, sometimes helped with GPS inputs, you can mathematically estimate the full orientation of the aircraft similar to the way an artificial horizon maintains its reference over the course of a flight -- but without moving parts.

Additionally, inputs from static pressure, pitot pressure, and external air temperature are used to determine altimeter altitude, indicated, and true airspeed. These sensors are electronic transducers that output a voltage for a given input, so there are no moving parts for these systems either.

All of these inputs are fed into essentially a computer, which is estimating the state of the system, taking new inputs into account, adjusting its state, etc etc and continuously displaying this state estimate on the instrument panel.

Note that you need to draw a distinction between the estimated state and actual state, because even with an electronic system, it's possible to 'tumble' the artificial horizon under certain conditions. Some units are better than others!

To expand on Daniel's answer -- a modern ADAHRS consists of three sections:

All of this is plugged into the avionics communications bus in your airplane, where it provides attitude, heading, and air data info to whatever subsystems need it, as well as error flags to allow the displays to show you the red X instead of bogus garbage from a busted sensor.

Not the answer you're looking for? Browse other questions tagged avionics glass-cockpit gyroscopic-instruments or ask your own question.

13
How are avionics updates delivered?
8
How does a horizontal situation indicator (HSI) work?
28
What's the UX in modern airliner avionics for diversion choices, and does it integrate to autopilot?
8
How to handle vacuum and turn coordinator failure in IMC?
1
What requirements do A&Ps (AMT) have to work on avionics?
11
Is VOR identification automated in modern avionics?
5
Credible Sport Project: Is it possible to revive the idea with modern avionics?