It occurs to me that jet engines are very heavy objects operating at high RPMs. This must have a very high angular moment and thus a high gyroscopic force.

This would restrict rotation when trying to yaw or pitch. Rolling, however, would not be effected.

How big of a problem is this? I imagine it is a concern to military aircraft as they want to be as maneuverable as possible. But I'm very interested in commericial efficiency too. I wonder if the giant A380, for example, had to be given greater elevator and rudder authority to help it pitch up at takeoff.

Note: all engines rotate but I'm assuming the jet engine will have by far the highest angular moment due to the weight of their turbines and compressors. Turbofans with high bypass ratio probably have the greatest gyro forces due to their huge fan in addition to heavy spinning spools.

Yes. The more so the higher the inertia and speed of the rotating masses and the lower the control authority. While the gyro forces of a jet are negligible in regular flight due to the high damping provided by the wings and tail, in hover they can become dominant. The Bristol-Siddeley Pegasus engine of the Kestrel, Harrier and AV-8B jump jets needs to have the low pressure spool run in opposite direction of the high pressure spool to balance its gyro effects. If that would not be the case, a yawing motion would produce a pitching motion, and vice versa. When you sit on a jet, the thrust of which is equivalent to your weight, tilting this jet fore or aft only slightly will produce a quick shift of your location, so any maneuvering in hover will become extremely hard. 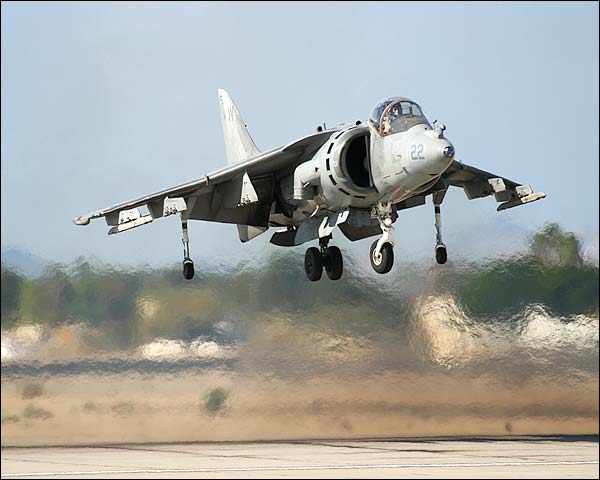 Generally, contra-rotation of engine parts has been used to reduce gyro effects. They first became an issue with rotary engines in WW I. A rotary engine has its crankshaft fixed to the airplane, and both the cylinder block and the propeller rotate. This gives better cooling at low speed and produces a flywheel effect, so the engine runs more smoothly. But when you yaw, the gyro effect pitches the aircraft up or down, so any precise maneuvering becomes very hard.

With the increasing engine power in 1916 and 1917, this effect became so severe that geared engines were developed where the cylinders rotate in one direction and the propeller in the opposite direction. As a consequence, the propeller had only half the RPM in air as it had with the cylinder block. This resulted in great propeller efficiency, but also big propeller diameters, so airplanes with those engines needed a high landing gear. Below is a picture of a Roland D XVI with a Siemens & Halske III contra-rotating rotary engine from 1918. This was an excellent fighter aircraft for its time with almost no gyro coupling.

Generally, jet engines are sensitive to maneuvering: Changing load factors will bend the spools between their bearings such that the tip clearance of both the turbine and the compressor need to be big enough to avoid contact under g forces, or when rolling with a wing-mounted engine. Every engine manufacturer will publish a load factor envelope within which the engine is safe to operate. Widening this envelope will reduce engine efficiency because the gaps between the rotating parts and the engine housing need to grow with the maximum load factor.

The answer is yes. Gyroscopic forces are a factor on propellor driven aircraft, but generally not noticeable on a stable ('God Fearing') aircraft in cruise flight.

However gyroscopic effects do become noticeable in several areas of a propellor driven aircraft's flight envelope. One of the best known areas are in dramatic changes in pitch attitude at low speeds. Tail wheel aircraft are particularly sensitive to this during the takeoff roll. Fast transitions from a three point attitude to a wheel attitude during ground roll will cause noticeable and unwanted yaw inputs due to gyroscopic precession in addition to changes in P-Factor. During takeoff in a typical tail wheel airplane with a propeller which rotates clockwise when viewed from the cockpit will yaw left when the tail is lifted during the takeoff roll and requires right rudder to counteract the gyroscopic precession. Likewise during a wheel landing, precession from the propellor will cause the tail to yaw right as the the tail wheel settles onto the runway and requires left rudder to counteract.

Advanced or unlimited aerobatic aircraft often fly gyroscopic maneuvers such as the Lomcevak, which utilize gyroscopic precession to induce tumbling forces into maneuvers. Even loops, hammerhead stalls, etc require a significant rudder or other control inputs to counter precession from the prop at slower speeds.

One area not yet mentioned where gyroscopic effects are significant (in both jets and props) is spin. (In English it sounds almost tautological :) Spin always involves significant angular velocities - while having very limited control authority.

(In a way, this is similar to the effects on aerobatics mentioned by Carlo Felicione.)

Due to gyroscopic effects of the engine(s), most aircraft have different left and right spin characteristics. To the point that, say, left spin may be almost unrecoverable while right spin would be easily recoverable. This also applies to initiating the spin: the aircraft may tend to enter spin in one direction more willingly than in the other.

You do see gyroscopic effects when you look at WW1 fighters. Quote from the Wikipedia Article on the Sopwith Camel:

The type owed both its extreme manoeuvrability and its difficult handling to the close placement of the engine, pilot, guns and fuel tank (some 90% of the aircraft's weight) within the front seven feet of the aircraft, and to the strong gyroscopic effect of the rotating mass of the cylinders common to rotary engines.

For comparison, a 777-300ER has a max take-off weight of 775,000 pounds (reference), while one GE90-94B engine weighs 16,644 pounds, not all of which would be rotating. So if we assume half the weight is rotating mass (probably high, but I don't know), the rotational mass of both engines is only about 2% of the total mass.

Finally, I'm not aware of any contra-rotating jet engines, so that would imply the forces aren't too noticeable.

Not the answer you're looking for? Browse other questions tagged aircraft-design engine efficiency or ask your own question.

0
Do the spinning parts of the tail mounted jet engines produce yaw on pitch changes?
17
What would be the general steps for making a flight in a biplane?
14
Why don't single-engine jets suffer severe gyroscopic effects?
1
Could flywheel type gyros stablize a plane?
4
Can a contra-rotating helicopter simply tilt its entire rotor set instead of using a cyclic?
4
Why does the LP compressor rotate in the opposite direction of the HP compressor?

6
Why is the DC10/MD11 center engine placed where it is?
4
Does the direction of counter-rotating props affect efficiency?
9
Are tripropellant jet engines a viable way to increase fuel efficiency for large commercial airplanes?
5
Do air-driven gyroscopic instruments suffer from icing or any blockage of filter?
2
How would gyroscopic effects affect push-pull configuration vs conventional twin engine in the event of engine failure?
8
Why does the MCAS use the horizontal stabiliser rather than the elevators?
18
Why would a B-29 consume more fuel at 17 kft than at 9 kft?
1
Why don’t flying-boom tankers have collapsible/frangible/breakaway refuelling booms?
2
Does dihedral improve roll stability in gusty conditions?
2
Can any conclusions about aerodynamic efficiency be drawn on the basis of fly-by noise?