What does it mean when pitch numbers move all over the HUD screen?

You can see pitch angle move out of screen or be on the side at the end.

Most modern military aircraft HUDs have two primary methods of displaying the velocity vector (or flight path vector) relative to the pitch ladder.

In this mode the pitch ladder will remain in a fixed position and the velocity vector will fly out independently to indicate instantaneous velocity. Tactically speaking, this is generally the preferred mode because it is both less distracting (the giant pitch ladder isn't bouncing everywhere) and the pilot always has an artificial horizon to reference in the HUD during maneuvers. During tactical maneuvers its commonplace for the velocity vector to become HUD limited so having a stable horizon to reference greatly increases situational awareness.

To your specific question, this F16 is operating the HUD in uncaged mode. Every HUD has visual limits (JHMCS withstanding) and there are obvious visual limits on the HUD in this video. As the pilot commands the jet to increase the G-Load you can see that the pitch ladder rapidly disappears to the right of the screen. This is indicating that the aircraft is in a hard left hand turn and that the pitch ladder has become HUD limited. Once the G-loads relax, you can see the pitch ladder fly back into the center of the HUD. The pilot finishes the maneuver inverted by overbanking through the left hand turn.

Upon further review of the video it appears the pilot either ALOCs or GLOCs partway through his break turn at just over 8 Gs. This video is a pretty terrifying look at the realities of BFM training in the military. They started their exercise at 16,000ft and the pilot aircraft's Auto-GCAS in the video makes a supersonic recovery at 660kts, slightly below 3000ft AGL! At that speed ejection could lead to possible death or permanent disfigurement, and the ground is a mere seconds from impact. His recovery altitude is well below safety altitude for BFM, and arguably within immediate ejection considerations (There was an eagle driver that punched out at Mach 1+ during a similar GLOC episode when he woke up pointed at the ground seconds from death. His ejection nearly killed him.)

The pilot Auto-GCAS begins recovery at 55 degrees nose low, 8,500ft MSL at 665 kts. The recovery is a max performance 9 G pull and takes roughly 7 seconds, during which point, while recovering, the aircraft loses an additional 4,500ft. Just think, if the aircraft lost 4,500ft during a 9G recovery, impact with the earth was well under 10 seconds had he not regained control of the aircraft. 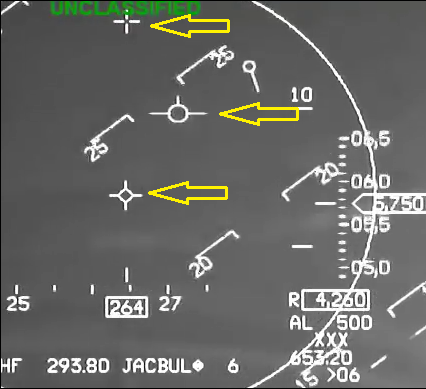 Updated answer based on F-16 specifics.

The top arrow shows the nose position—pitch angle, in the F-16 it is based on the Gun Cross (Boresight Cross), which also indicates the fuselage reference line.

The middle arrow shows the position of the flight path marker (FPM, also known as FPV), it shows where the aircraft is going. The vertical distance (angle) between both symbols is the angle of attack.

The bottom arrow is an air-to-air attack mode called a missile diamond. Don't focus on it.

The FPM can go sideways in crosswind and/or with rudder input, as the plane would be slipping, skidding, or flying sideways. That's the horizontal distance (angle).

The pitch angle numbers/lines—scale—moves with the FPM centered on it, unless the pilot wants it to be centered around the nose. The latter is called caged mode.

The rotation of the scale indicates the bank angle.

Now that we know all this, a direct answer is: the plane's nose relative to where it was going was all over the place, and so was the pitch scale.

Not the answer you're looking for? Browse other questions tagged flight-instruments angle-of-attack hud or ask your own question.

7
How does the HUD Display System work?
6
What is the relation between roll angle and pitch angle?
1
What kind of helmet is in this A-10 video?
1
Is this angle of attack animation backwards?
5
What do all the indicators on a HUD mean?
2
Why does the stagnation point on airfoil move with the angle of attack?
2
How does the Angle of attack vary from the root to the tip of a propeller for a fixed pitch prop?
4
What does the balance ball actually indicate?
9
What is the purpose of a thermal HUD for civil aviation aircraft?