How is fuel stored and routed on a trijet with one engine at the tail?

How is fuel stored and routed on a trijet that has only one engine at the tail? Does the rear engine have totally separate fuel tanks and lines? 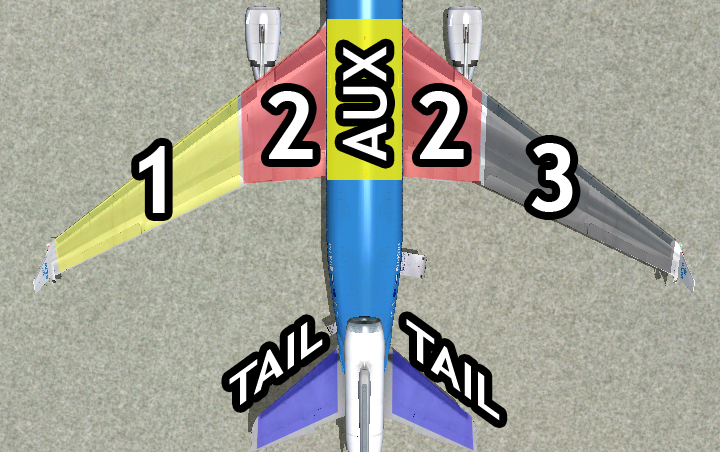 On an MD-11 the tail mounted engine is fed from tank 2, which is two halves as shown above -- the two halves are connected via vent lines.

The center tank on an MD-11 is called aux, and it feeds all the engines until it's empty -- the aux tank actually fills the other tanks and the other tanks do the feeding (systems display shown below). Tank 2 (being bigger than 1 or 3) then carries on filling tanks 1 and 3 plus feeding all the engines. Once tanks 1, 2, and 3 have the same fuel quantity, each tank then feeds the respective engine. 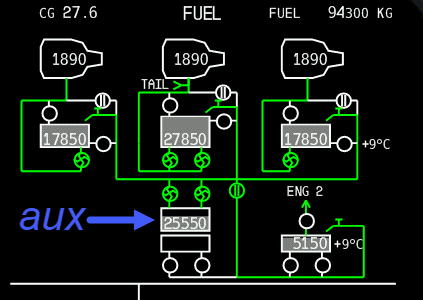 Fuel is transferred to and from the stabilizer (tail tank) to manage the CG. It is fully consumed by the time the plane reaches its top of descent -- as a forward CG is more economical for descending. The exact sequence is managed by the fuel system controller. The tail tank also feeds the tail engine as part of the CG automation.

The sequence (and scheduling) is automated even with an engine, or even two, out.

The #2 engine is fed by the aux, tail, and #2 tanks. If an engine fails, then cross-feeding is involved.

Not the answer you're looking for? Browse other questions tagged aircraft-design fuel jet or ask your own question.

71
Why are fuel tanks in the wings filled first, and why are they used last?
24
Why are the center tank pumps deactivated when slats are extended on the A320?
6
Why hasn't there ever been a large 4-engine commercial airplane with 2 engines on the wings and 2 engines at the tail?

10
Why do trijets (3 rear engines) usually have a T-tail instead of a normal tail?
6
How is the center of mass controlled in planes with multiple tail engines?
6
Why hasn't there ever been a large 4-engine commercial airplane with 2 engines on the wings and 2 engines at the tail?
5
Why do BWB designs typically put the engines in the rear?
6
What are the issues involved in converting a quadjet into a twinjet?
29
Why do most airliners have underwing engines, while business jets have rear-mounted engines?
4
Does a tandem ultralight need flaps on the rear wing if the front wing has flaps?
6
Does one-engine cruise consume less fuel than two-engine cruise?
1
Was it ever considered to optimise a jet to normally operate with one engine shut off?