How is the terrain displayed on the ND in a A320?

When you turn on "TERR ON ND" in a A320, you see terrain info on you navigation display (ND), but where does its source come from ? 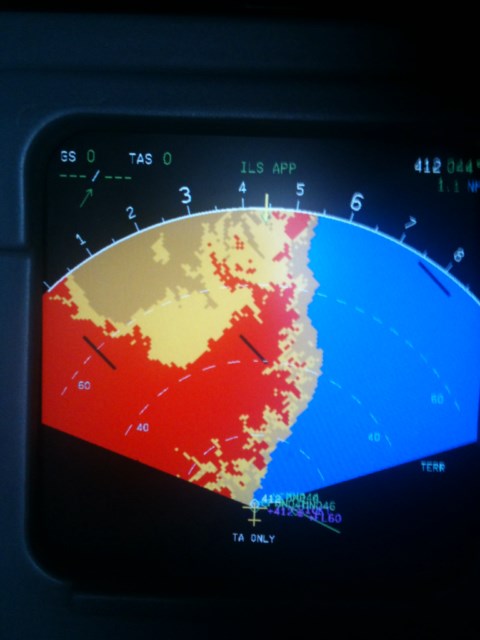 The terrain data is contained in a database within the EGPWS (Honeywell TM) or the Terrain Awareness and Warning System (TAWS) as defined in the regulations -- can't use a trademark in the regs.

The discussion in your link about "blockiness" when zooming in is a result of the database grid references. To save memory space, the resolution of the world-wide terrain data varies based on terrain variation and it's relative hazard to flight operation. There's greater resolution (smaller grid) near airports and in mountainous areas.

The A320 does have airborne radar that is capable of displaying "weather" which really means precipitation. It can't be displayed at the same time as the terrain to avoid confusion.

Neither the EGPWS or the radar data are in the FMGS. Their data is just underlayed on the navigation display. (EGPWS does receive data from the FMGS to support it's warning functions.)

Not the answer you're looking for? Browse other questions tagged navigation flight-instruments radar or ask your own question.

21
How does ATC radar/ADS-B ground stations not get confused with signals sent from multiple aircraft?
12
OBI, RMI, HSI… What combination do GA aircraft w/o glass typically have?
14
Does a secondary surveillance radar need the support of a primary surveillance radar?
12
Did the Stuka Ju-87 really have a radio altimeter? If so, when?
13
How is varying modulation depth achieved by localizer ground transmitters?
12
What are the numbers in boxes on an A320 ND when terrain is shown?
10
How is radar separation assured between primary and secondary targets?
7
On ATC's radar, does an aircraft that loses its transponder simply disappear?
0
Why can’t a single-fan-beam radar determine the elevation angles of its primary targets?