In fact, has there ever been a fully automatic flight of any pure aircraft whatsoever? This is gonna sound crazy, but the only thing I know that comes close is the Soviet Space Shuttle Buran. It launched unmanned and returned successfully under computer control, including its glide and landing.

So I'm interested in automatic aircraft similar to large commercial airlines. BTW, remote control toy planes wouldn't count because that is not automated (a person is manually controlling it).

The book The Glass Cage describes a fully autopilot-controlled military test flight in 1947. The plane was a C-54 Skymaster with seven men aboard. According to this source, the pilot aligned the plane on the runway for takeoff, but the takeoff, course control, and landing were performed by autopilot with no human engagement. See also this report from the Chicago Tribune at the time.

Fully autonomous flights have been demonstrated- but not not in 'large commercial' aircraft.

... this time, the helicopter did it entirely on its own — with no humans involved. It was the first fully autonomous flight of a full-sized chopper, ever. 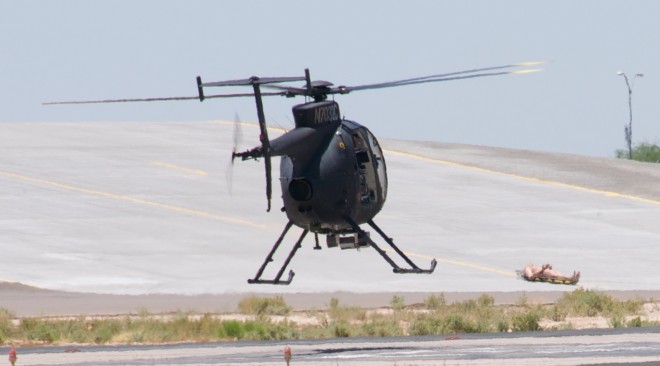 Note: I've considered only those where it is explicitly mentioned that 'full' flight was autonomous. Not the capability alone.

Not as big as a commercial airliner (but bigger than many people realise), at the time of its introduction into the USAF, Global Hawk flew from Edwards Air Base in California to Australia without any human control (including takeoff and landing).

Following incidents like 9/11 and GermanWings, it would be sensible to introduce a feature into all passenger airliners now to automatically land at the nearest airport - and once the feature had been invoked, it could not be revoked. Better yet, largely remove most of the pilot's work.

There is no current aircraft capable of fully automated flight in all stages of flight as equipped and operated according to the POH. The closest you can get is from climb out to landing. Currently you could fly the takeoff and activate the auto pilot once established on climb out (probably some time after the gear came up or around then). Let the FMS fly the plane, then setup the auto-land to take it home. But you still need to get it off the ground.

There are various ways to guide a plane in flight via automated systems. Most modern airliners contain an FMS unit capable of using a variety of navigation methods and control of steering. Smaller planes that don't utilize an FMS may have GPSS (GPS Steering). GPS Steering is becoming more common on smaller planes from what I have seen.

Not the answer you're looking for? Browse other questions tagged autopilot autoland or ask your own question.

88
Why do we still use pilots to fly airplanes?
4
How autonomous are commercial passenger airliners?