Sailplanes, among others, use a cotton string to show the sideslip angle. I've often heard that while circling in thermals the cotton string should show a slight slip angle to climb faster. This effect can be observed specially at high bank angles with heavy, high span gliders like the ASH-25. The german skid Wikipedia-article has even a subsection about it; however, without references. Flying like this has also the advantage of lessening the stall risk of the inner wing.

Is the indicated sideslip angle of the cotton string real or only apparent and due to the uneven incident airflow? Has this effect ever been scientifically measured and is it used in larger airplanes with FBW and sideslip angle sensors while turning? 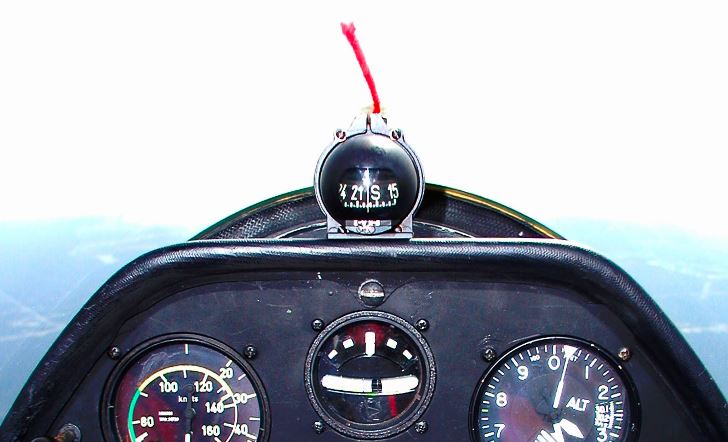 Origin of the theory

Klaus Holighaus, one of the famous glider pilots of the 70s, and himself a glider designer at Schempp-Hirth, is at the origin of a controversy when he recommended not to turn with the ball centered, and especially when climbing in thermals. Mr Holighaus did see two problems with the perfectly coordinated turn:

I'm not an expert in the field, so I'll just rely on the article by Richard H. Johnson published in Soaring Magazine and titled "Do you really want to keep the yaw string centered?"

Before going into Klaus Holighaus' theory, let have a look at lateral stability.

Roll stability is required to prevent the roll angle to increase automatically after a small unwanted roll input by the pilot or by a cross wind gust. The aircraft must return to a null roll angle automatically to prevent nasty consequences, including entering a spiraling descent.

No sideslip: No dihedral effect

We know turning is not controlled by the rudder but by rolling the wing with the ailerons. But at some point the lowered wing aileron may also be deflected downward for turn rate control, and this deflection may happen to be excessive:

When the lowered wing's aileron is deflected downward, not only is its lift increased, but also its drag is increased, and a skidding turn will be induced.

At the same time the lowered wing, being closer to the turn center, is flying slower than the raised one. Slow speed, high angle of attack and more drag for the aileron can induce a stall: If the lowered wing or its aileron stall, drag on this side is increased and the aircraft is likely to enter a dangerous spiral.

However in most of the cases we can stop skidding:

The skid can easily be corrected for by adding some top rudder to keep the skid ball centered.

The solution implies to add drag to the rudder, which is not satisfactory from a performance perspective.

Get the best of both worlds

This is where the mild-slipping turn theory comes from: By turning with a slight slip instead of a perfectly coordinated turn:

The article's author adds this explanation about improving lift with the sideslip:

Why slipping improves the climb in some gliders is not well understood. In generating lift, wings also generate spanwise flow, outward along the bottom and inward along the top of the wings. It is possible that there is flow separation near the tip of some circling sailplanes, and that slipping changes the spanwise flow enough to eliminate or reduce this. Separation can increase the drag significantly long before the tip actually stalls.

The article also enter in the details of why this is different when winglets are used on the wing. Slipping may induce a stall instead.

The optimum degree of sideslip depends to some degree on both the sailplane's wingspan and dihedral angle. After many hours of flying my 16.6 meter ventus a and similar sailplanes, I find that my best overall circling performance and handling characteristics occur while the canopy mounted yaw string is deflected about 10 degrees on the high side of the turn (a gentle sideslip actually).

The yaw string is also more accurately named the slip/skid string, as it doesn't indicates a yaw angle but a quantity of skidding/slipping, like the ball.

As @ymb1 commented, the string being on the canopy, ahead of the CG, its indication is exaggerated.

In a coordinated turn, the ball of the slip/skid ball indicator will be centered while the yaw string will be already indicating a slight amount of slip. This error will be magnified with actual slip.

The author estimates the actual degree of slip in his case is more accurately about half the indication of the string. See also Peter Kämpf's comment: "exaggeration is also caused by the fuselage shape [...]".

Not the answer you're looking for? Browse other questions tagged aerodynamics flight-controls flight-dynamics sideslip or ask your own question.

12
Can all airliners be turned without rudder input?
16
How does the dihedral angle work?
15
Does the rudder need to be held throughout a coordinated turn?

5
How does the angle of attack vary in turns?
23
Does lift equal weight in a climb?
4
Does extension of flaps 1, 2, 5 or 10 increase descent rates?
5
How does climb-rate vary with density/pressure altitude?
18
Does a headwind/tailwind affect your rate of climb?
9
Why does elevator input move the turn coordinator ball in steep turns?
14
Why do aircraft have a crossover airspeed, and why does it increase at higher vertical load factors?
19
Does an F/A-18 require a lot of rudder in turns?
15
How controllable is the 737 in single-engine manual-reversion flight? Is it controllably landable (or go-around-able) in this condition?