What happens to EGT after a bird strike?

I just watched the movie "Sully", and I really enjoyed the effort put into making the movie as accurate as possible. As I'm working towards my PPL, I decided to apply some of my new aviation knowledge when watching the movie. I especially focused on the center MFD. I understood everything I saw, except for the Exhaust Gas Temperature (EGT) readings after the bird strike. I noticed that Engine Pressure Ratio (EPR) and N2 fell, but EGT stayed in what looked like roughly the same position. I would have expected EGT to fall after the bird strike destroyed the engines, but it didn't. Is this normal? Did the flames seen coming out of the engines cover up a fall in EGT?

No two bird strikes are the same when it comes to engine parameters, we can look at this incident.

Bird strike in both engines, yet only one showed above-normal EGT.

In a jet engine, the bypass air assists in cooling, damage will disrupt this air flow.

In an engine fire, EGT-rise is one of the confirming factors.

However, according to the NTSB report for Sully's plane:

No in-flight or postaccident fire occurred.

So if it is just an engine failure, the engine will spool down.

Even if the damage prevented the windmilling, EGT should still drop. If the EGT sensors were damaged, an indication of EGT reading failure is to be expected. 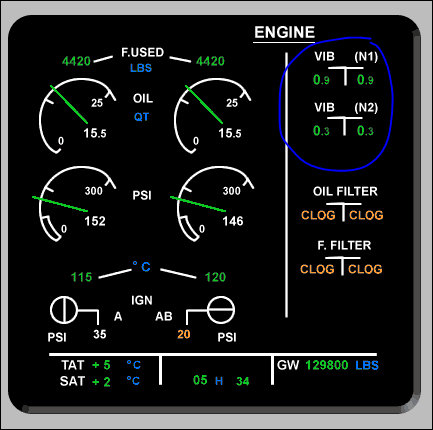 Not the answer you're looking for? Browse other questions tagged airliner engine-failure birds or ask your own question.

14
What happens if an engine fails between V1 and V2?
0
How are bird strikes tested in helicopters?
4
What is the minimum recommended cruising altitude to avoid bird strikes?
31
Why was a flight delayed because of a bird in the cockpit?
3
Could an AN/APG-79 AESA radar "lock-on" a single bird?
3
What happens to Ryanair aircraft after they leave the airline?
1
What is the relationship between EGT, Fuel Flow, N1, N2 and Air Temperature?
6
Can a bird strike destroy the stealth capability of F-35?
3
What happens to Vyse and Vxse above the OEI ceiling?