Why do some helicopters have the tail rotor mounted higher than the tailboom?

Why do some helicopters have the tail rotor mounted high above the tailboom, whereas others have it at the end of the tail boom? 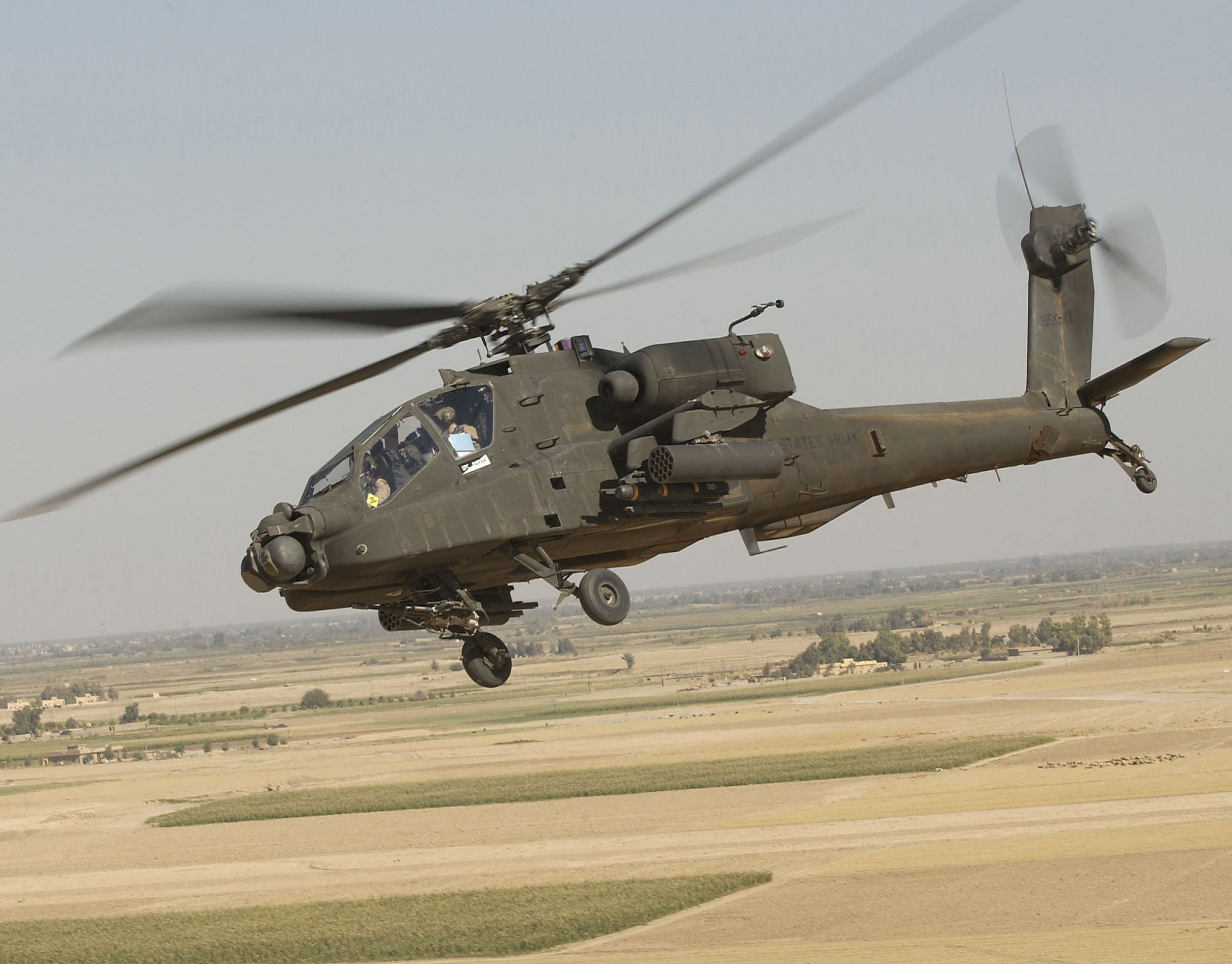 At the end of the tailboom:

I know the reason for having tail rotors, that's not the question at all. I am just curious as to whether the heavier helicopters have different torque counter requirements than the lighter ones?

Generally I notice that the heavier ones have the tail rotor mounted higher up and the lighter ones have it on the boom.

In R/C almost all of the 3D models have the tail rotor at the same level as the tailboom.

I've been thinking hard about this question, how to answer it and indeed, whether to answer it or not at all since the question itself is a good one but borders on "too broad".

The answer from aeroalias is good but doesn't offer any "whys". Tail rotor design is also a fiendishly complex subject and, like most things in aviation, is the result of many compromises and inter-dependencies.

As an example of how complex it is, there are two helicopter dynamics "bibles" by Ray Prouty and Walter Wagtendonk. Neither of them fully explain tail rotors and indeed, Prouty often says "for reasons I don't understand". If Prouty doesn't understand something, then you are on a safe bet to say that the majority of helicopter pilots don't understand it either. You need a Physics PhD to design helicopters, you don't need a PhD to fly one.

So this is from the understanding of a pilot without the PhD. I will leave out any mention of which way the main rotor rotates and on which side the tail rotor is mounted since it will needlessly complicate the already complex. I am also assuming a generic "standard" helicopter with a single main rotor and both vertical and horizontal stabilisers. Of course, there are designs that deviate from this but to cover all scenarios would need a book, not an answer on SE.

I'm deliberately ignoring a bunch of other dependencies such as "is the advancing blade of the tail rotor at the front or the rear?"; "is it a tractor or pusher tail rotor?"; the interactions between the main rotor down-wash and vortexes and wind and what happens in high yaw rate situations (fast pedal turns) and sideways flight. Yes, tail rotor design is probably the most complex subject in helicopter dynamics.

As you know, the tail rotor counters the torque applied to the fuselage by the rotation of the main rotor. Since the tail rotor generates lift in the horizontal axis, it also produces a force which will move the helicopter across the ground (tail rotor drift).

To offset this, the rotor disc is rigged such that it tilts in the direction of this movement to introduce a horizontal component of lift which opposes the tail rotor drift and keeps the helicopter steady in the hover. If not rigged to do this with the cyclic neutral, then the pilot will subconsciously hold a little lateral cyclic to hold a steady hover. It's subconscious because you do not hold attitude and position by positioning the cyclic. You position the cyclic to hold attitude and position.

So we now have two horizontal thrust components, one from the main rotor and one from the tail rotor. Now all forces act around the centre of gravity, and it is from there that all accelerations to the aircraft to move it are measured. Therefore, if the centres of these two forces are not inline with respect to the CoG, i.e. the same vertical distance from the CoG, then a rolling "couple" is created between them and the fuselage will roll until the opposing forces are equal and opposite. This is why many helicopters hover with one skid low.

As the aircraft moves into cruise flight, the vertical stabiliser increasingly offsets the main rotor torque so the power required by the tail rotor and the angle of attack needed to offset torque reduces, therefore the roll couple force reduces and the deck of the fuselage will roll back towards level. The horizontal stabiliser also generates lift which further counters the roll such that in cruise, you are using little, if any pedal.

This is our main compromise. If the horizontal components of the lift vectors are not aligned with each other, then you accept an uneven deck in the hover. If the design calls for long periods of hovering (police work, search and rescue etc), then your design is likely to be that both centres are aligned and are above the CoG (the main rotor thrust vector must always be above the CoG because of the engine and main rotor gearbox). It is my guess that the Apache has the tail rotor mounted high to align the centres to provide a level and stable deck which makes sense on a gun platform designed to hover for long periods.

If you look at a model where the tail rotor and main rotor vectors are not centred, for example the R22, then they do indeed hover with one skid significantly lower than the other. This also has the effect of adding a couple of feet to the safe hovering height since catching the skid on the ground whilst rotating or moving sideways is almost certainly a generator of Bad Days(TM).

The trade off is that to position that rotor at the top of the fin requires an additional gearbox and drive shaft at the base of the fin adding weight, complexity and maintenance requirements. Not a concern for the Apache; certainly is for the R22.

Why does the Comanche mount the tail rotor so low, at the end of the boom? Well, I'm not privy to the design decisions and I can't find any authoritative references to them so I am using guesses, which I hope are educated guesses.

One design goal of the Comanche which is not present in almost any other helicopter is stealth.

Rotor blades make great RADAR targets, especially the tail rotor. It's relatively short blades rotating at high speed and stuck way out there in the open provide a lot of strong RADAR returns. There's not much you can do about the main rotor except in the blade profiles and materials (the details of which I expect are classified) but by mounting the tail rotor closer to the main body at the end of the boom and in a fenestron, those RADAR returns will be significantly reduced.

The tail rotor air flows are also going to help to disturb and cool down the engine exhausts by blowing them sideways and mixing them more quickly with the cooler ambient atmosphere. If you look closely, you'll see that the tail rotor is mounted directly aft of the exhausts. I am further guessing that the tail rotor gearboxes are good sources of heat so removing one (by mounting the tail rotor low) also contributes to stealthiness. The added benefit of mounting in a fenestron is to protect the tail rotor from tree strikes and so on, always a concern in nap of the Earth flying.

Because that tail rotor is mounted so low, there is a strong rolling couple and indeed, the Comanche flew very much skid low. 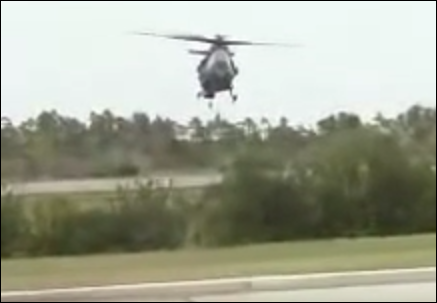 To reduce this tendency, the tail rotor is canted (all this from memory) by about 20 degrees which reduces the horizontal thrust vector component and produces around 1000 lbs of lift through the vertical component which offsets the tail low tendency produced by having the TR below the CoG. That high dual horizontal stabiliser is also going to produce lift to keep the tail up in the cruise as the TR power reduces.

The 20° canting of the whole vertical also removes a powerful RADAR reflector. Flying low, a perfectly vertical tail would return horizontally oriented radiation, while the 20° angle lets one side reflect RADAR energy into the ground and the other into space.

There is a lot more to all this but as I say, it really needs a book to start to fully address all the factors but hopefully, this answer walks through the main lines of thought.

There are multiple considerations to be taken in account while determining the location of the tail rotor hub relative to the main rotor plane. One important consideration is how it affects the tail rotor thrust- lesser the thrust required (at higher or lower position), lesser the weight penalty, as the solidity and size requirements reduce.

If we go by this consideration, in general, the tail rotor hub should be located on the plane of rotation of the main rotor. from Tail Rotor Design Guide:

But this is only part of the story- there are other considerations here:

So, in the end, this is a tradeoff.

Raymond Prouty was the designer for the Apache AH-64 tail rotor (your first picture). In the pre-design phase, the AH-64 had both a T-tail like in your photo of the Comanche, and later on the final configuration in your photo. In this document (behind a pay wall, sorry) he mentions that left sideward flight was smoother and the Dutch roll made more stable when the tail rotor was raised during the flight test development phase - purely aerodynamic considerations.

In the second picture, the Comanche shows a T-tail and a tail rotor in a fenestron: tail rotor and horizontal stabiliser have swapped location. Locating the tail rotor in a fenestron has several advantages: the vertical fin does not block the thrust, and it is shielded from the external flow and rotor wake in forward flight. A fan-in-fin is only possible at tail boom height, so if this design is chosen the height follows automatically.

Raising the tail rotor complicates the mechanical linkage and therefore is associated with higher power losses, but this is not listed as a dominant pre-design feature in the two reference books that I have. Aerodynamic considerations seem to carry more weight here: interference with the main rotor in hover, sideways flight and forward flight. With military helicopters, operational requirements for tail strike have influence on placement of the tail rotor as well.

Placement of tail rotor also affects lateral trim in the hover, depending on what kind of main rotor is applied. From Helicopter Performance, Stability and Control by Raymond Prouty: 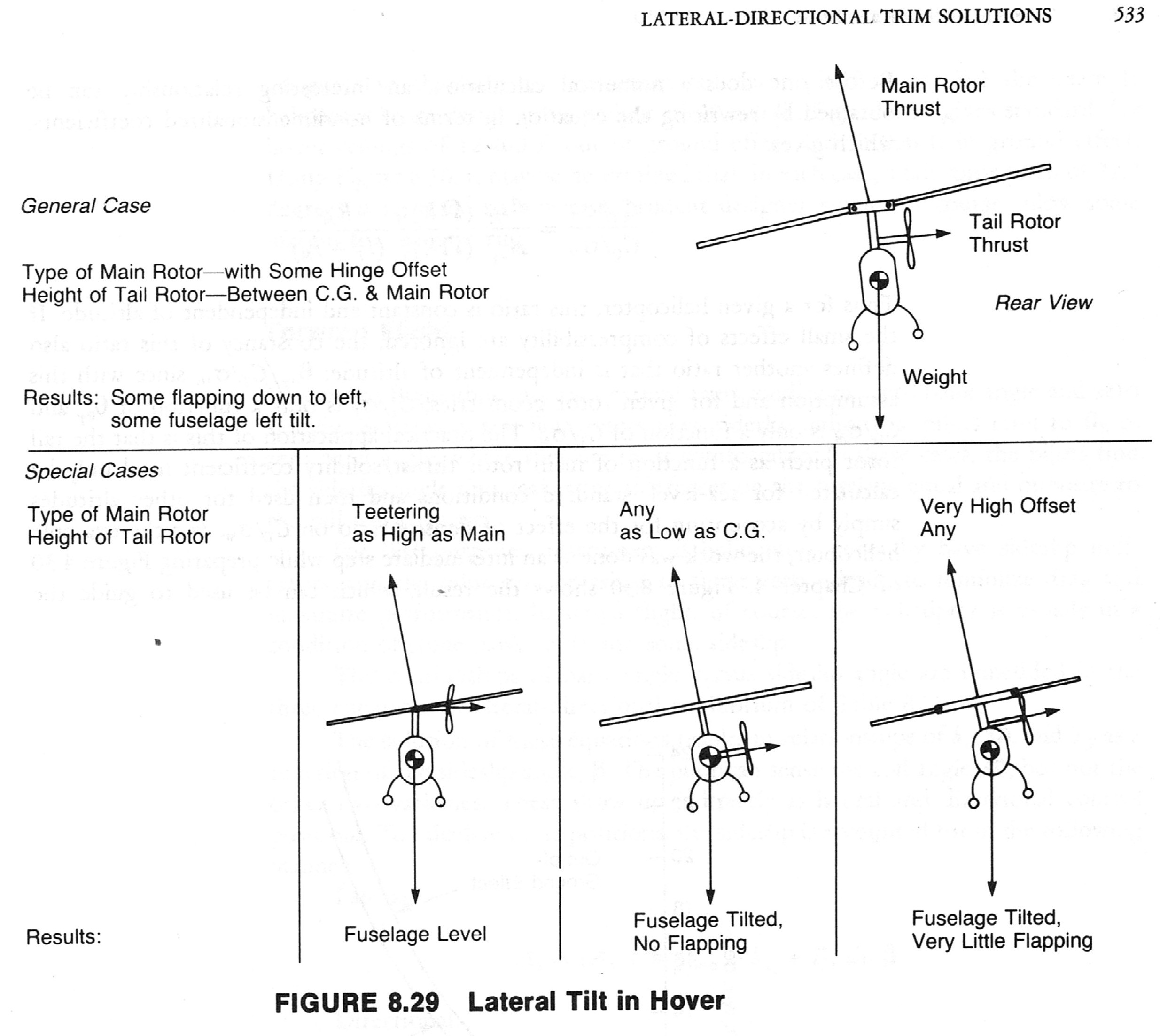 As you can see, only the teetering rotor with the tail rotor at height of main hovers horizontally. But hovering with one skid down seems to be not a big problem.

27
Why is the UH-60 tail rotor canted?
1
Is there a disadvantage to the “fan in fin” design seen for the tailrotor on many Eurocopter helicopters?