Does the USA government operate any business-jets with mid-air refueling capability?

Today I saw a business jet, 10 or 12 passenger or so fly over, evidently on approach to Whitehouse Naval Outlying Field (NOLF) (KNEN), said jet had some sort of probe on the nose and was painted white. I was not able to discern any markings. Does the USA government operate any business jets with mid-air refueling capability? Another obvious question is: why would a passenger jet fly into NOLF?

Does the USA government operate any bizjets with mid-air refueling capability?

Yes. According to this article, it's being used by the Air Force and the Navy for autonomous air-refueling tests. 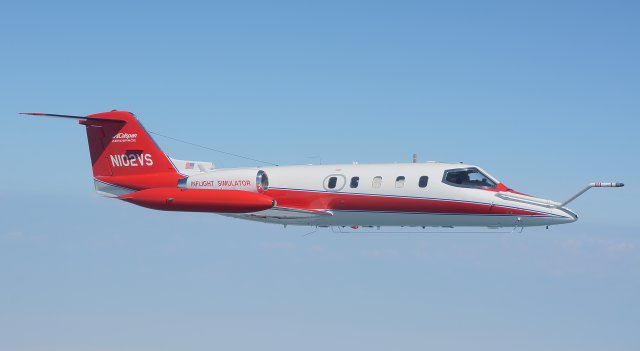 As a surrogate for the carrier-based drone, the Lear is assessing its autonomous refueling capabilities and performance for both Navy and Air Force aerial refueling techniques.

This particular Lear in the photo was active just last week: 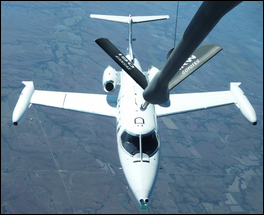 There is also this, but it doesn't have the probe.

The answer is Yes civilian aircraft register the one in the picture above is the learjet25 operated by [Calspan][1] is an inflight simulator, This aeroplane used to travel worldwide to charter the aircraft for various military and Civilian Test Pilot School like NTPS ITPS (check wikipedia)

Last evaluation I did was simulating PIO (Pilot Induced Oscilation) in simulating the behaviour of one of unstable fighter aircraft that crashed during prototype.

the Idea of inflight simulation is to check the safety features, with as close as its fidelity as possible to check the stability and control characteristics.

In this case, the refuelling probe install, is to evaluate HQR Handling quality Rating) of the certain aircraft in performing air to air refuelling to avoid accident / incident. I have investigated one of the accident of military aircraft that was not equipped with FDR and one of the technique is to use rare light bulb analysis.

Nevertheless, this aircraft is very popular flight testing device in either test pilot school or even aircraft research and development of aircraft manufacure, we have tested prototype of N250 using this calspan Lear25 and it was a great tools

39
Why are the pitot tubes on supersonic combat aircraft so long?
13
Why do some military jets have needle-like structures at the nose and others don't?
5
What is the object on the nose of this HondaJet in this marketing video?

16
Why is mid-air refueling worth it? (or is it at all?)
9
Is there a special procedure for mid-air refueling in the rain?
22
Why does the US use two types of aerial refueling?
12
What would happen if a helicopters rotor hit the [in-air] refueling probe?
10
Does mid-air refueling have very hard constraints on weather?
34
Why do airplanes bank sharply to the right after air-to-air refueling?
4
Do stratospheric business and military jets use the North Atlantic Tracks?
2
How many crew does a P-8 operate with?