What is the effect of airfoil thickness on aerodynamic lift?

More than once I`ve read that the airfoil thickness contributes little to the lift compared to the angle of attack and airfoil curvature and has more to do with airfoil stall characteristics.

Could anyone explain this, preferably mathematically?

In chapter 2 of his book Fluid Dynamic Lift, Sighard Hoerner discusses the influence of thickness by going to the extreme of an airfoil with a circular cross section:

Assuming that we would manage by means of boundary layer control around the rear side, to displace the stagnation points from zero (at the forward side) and from 180° (at the rear side) both down toward 90° (at the lowest point), without losing any momentum, its lift curve slope would be dCL/dα =4π, rather than = 2π, as in thin foil sections.

Note that the lift curve slope is per degree. $\frac{t}{c}$ is the relative thickness of the airfoil. In figure 21 of that chapter he uses the concept of the lift angle, the angle at which the lift coefficient reaches unity, to show how the lift curve slope varies over airfoil thickness. This plot should demonstrate how limited the applicability of the approximation is in reality.

The lift angle of airfoil sections as a function of their thickness ratio (picture source).

Stall is dominated by flow separation, and the displacement effect of an airfoil adds to the stresses on the boundary layer which determine when the flow separates. On the other hand, thickness is indirectly influenced by the nose radius of the airfoil, and this in turn determines the suction peak at the nose and at higher angles of attack. A higher suction peak also stresses the boundary layer. In consequence, both a too small nose radius (and too small airfoil thickness) and a too high thickness lower the maximum lift coefficient. The sweet spot is at a thickness of around 10%.

In chapter 4, Hoerner looks into that dependency in detail. The plot below does not include highly cambered, thin airfoils, and the straight limit for thin airfoils is misleading. 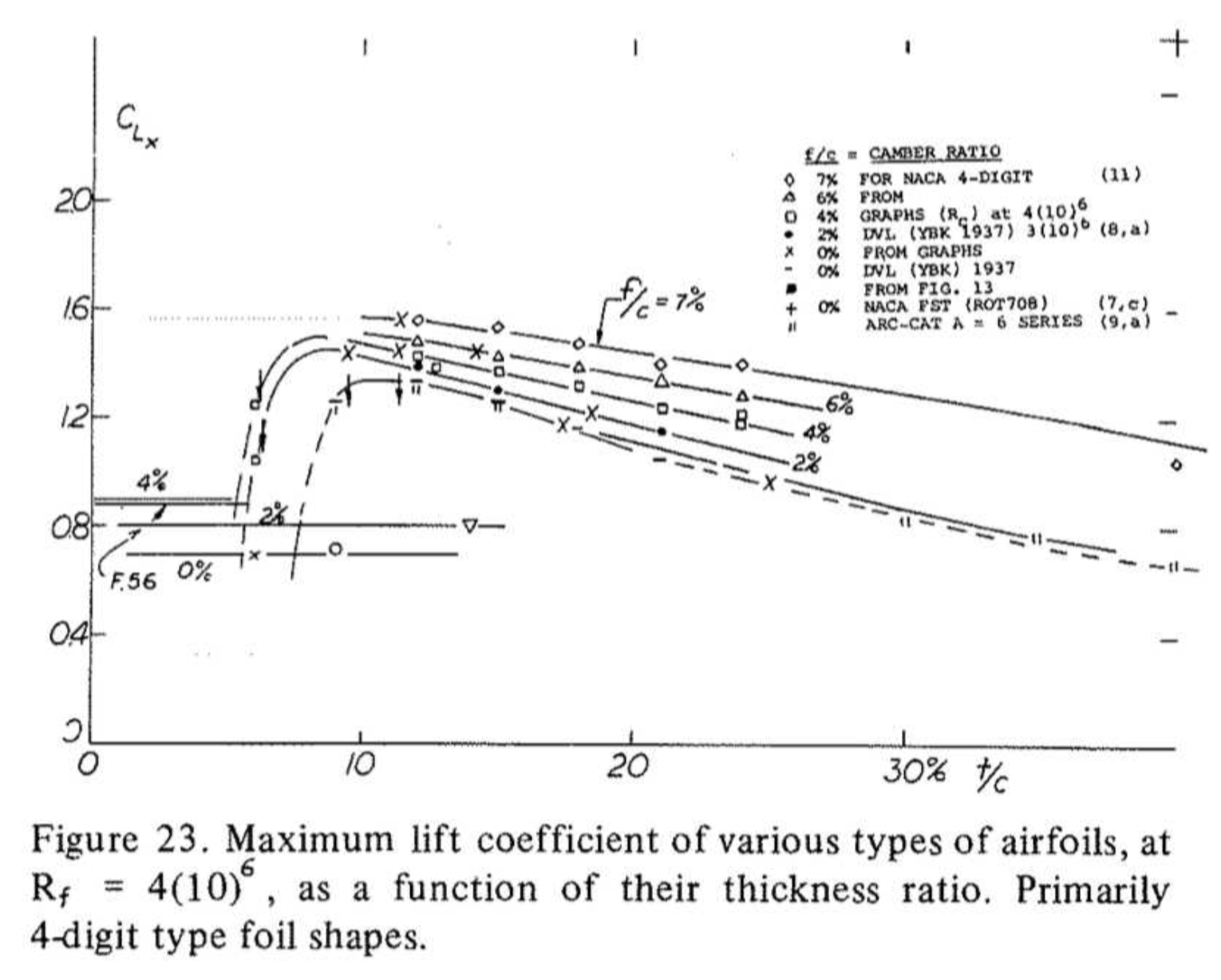 Maximum lift coefficient of various types of airfoils as a function of their thickness ratio (picture source).

44
Why does supersonic flight detach airflow from a wing?
7
Why are RC rotor blades different from helicopter blades?
4
What are the rules of airfoil thickness from root to tip on tapered wings?
4
What is the purpose of thinner airfoils used near wing tips?
4
How does wing flex reduce wave drag?
3
How do thick and thin airfoils compare in lift generation?
2
What is the drag optimized wing form for given lift and bending moment?
2
How to determine the thickness of an airfoil?
2
How does airfoil affect the coefficient of lift vs. AOA slope?

3
What is the physical meaning of Mean Aerodynamic Chord?
10
Is this paragraph about the dihedral effect in the FAA's Glider Flying Handbook correct?
7
How do you calculate the lift coefficient of an airfoil at zero angle of attack?
1
Circular arc airfoil wing: why does the wing nose down twist due to camber?
0
New Research: VGs increase lift to drag ratio up to 880%. Does it work for flaps too?
3
When calculating the lift coefficient, what area is used?
1
How to find the static stall angle of attack for a given airfoil at given Re?
4
Has anyone tested or flown permeable wings to increase efficiency?
2
How does airfoil affect the coefficient of lift vs. AOA slope?