In which situations can a Dual-Aircraft Platform (atmospheric satellite) remain nearly geostationary?

The Dual-Aircraft platform described by William Engblom of Embry-Riddle Aeronautical University on this NASA feature page and in the first half of the video of the 2016 NIAC Symposium uses the wind sheer (difference in horizontal wind velocities) between two altitudes to allow a well-programmed pair of tethered solar gliders/planes to remain in a general area (e.g. 150 km radius) above the Earth.

The analogy is kite sailing, except in this case both fluids are air.

In the simulations presented, the aircraft have propellors which can generate forward thrust using electrical power, or reverse thrust when the motor is used as a generator (analogous to regenerative braking on electric vehicles).

I'm having problems understanding the point of this system - can it do something that a single solar-electric atmospheric satellite can not do? Can the horizontal wind sheer provide some special advantage for "hovering" near a certain location on the ground? Is a small (say 10 degree) difference in wind direction at the two altitudes enough to remain roughly geostationary - or is a much larger difference needed?

The second questioner (a bit after 00:20:00) seems to pose a simple but interesting question about tacking, and the third questioner's mention of conservation is also interesting.

Below: screen shots from the 2016 NIAC Symposium 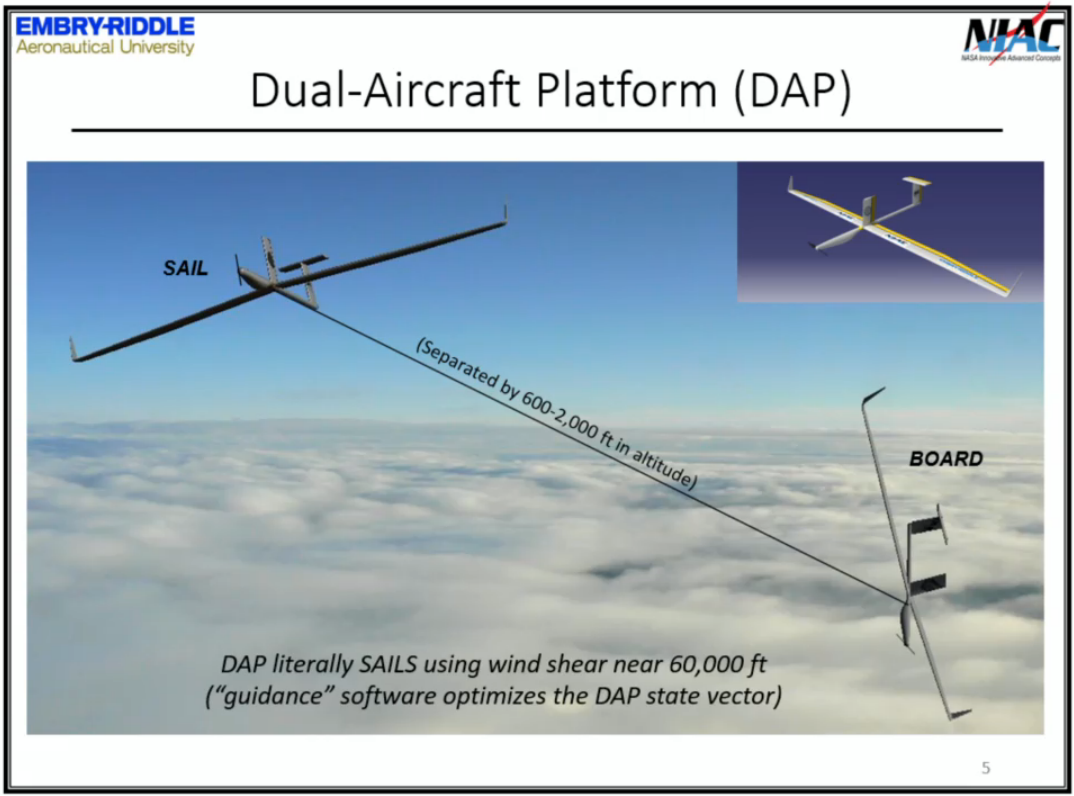 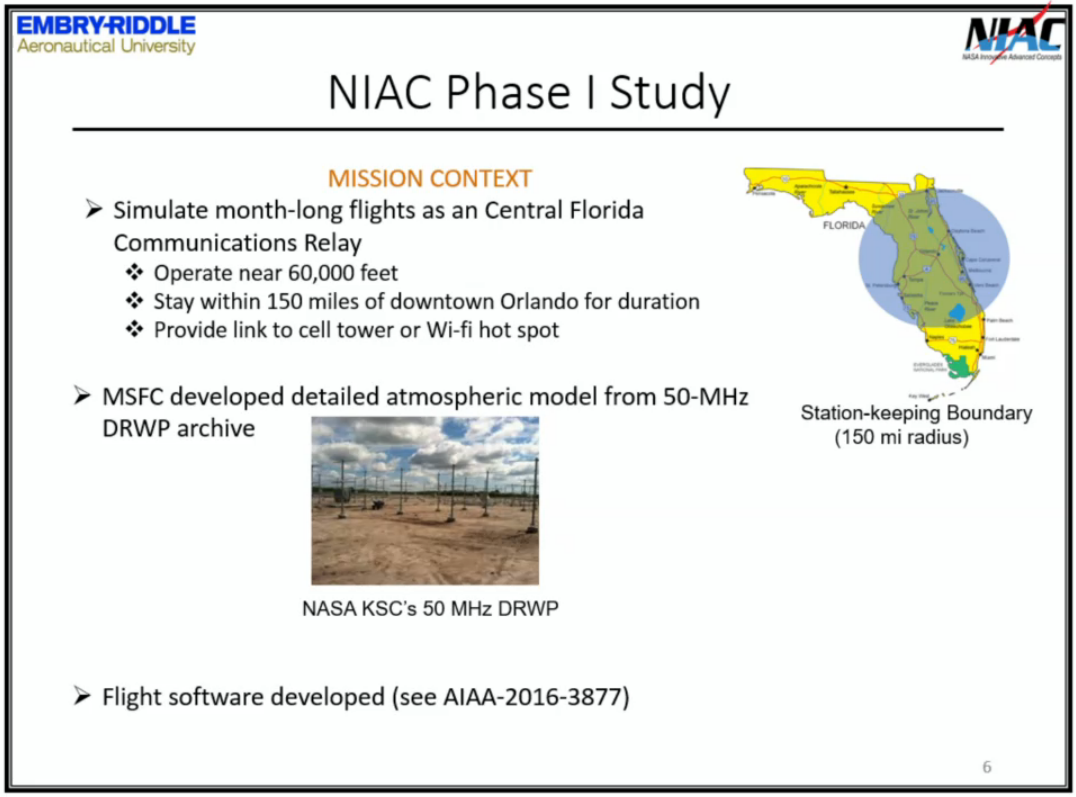 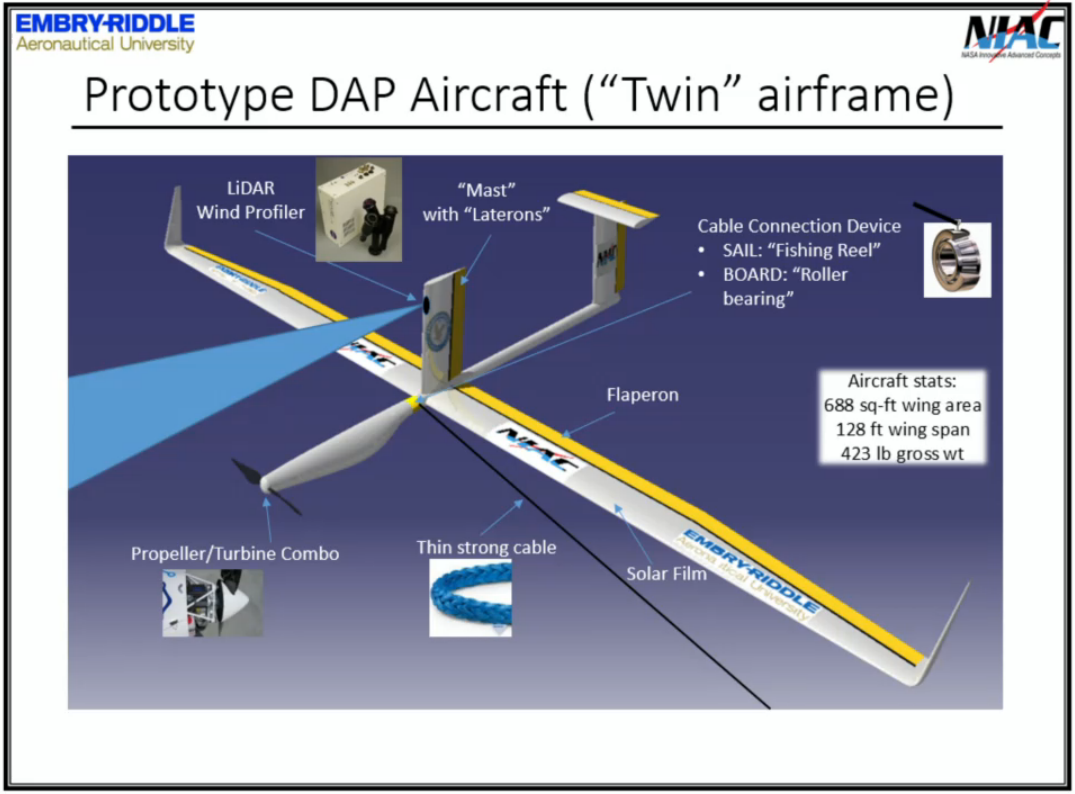 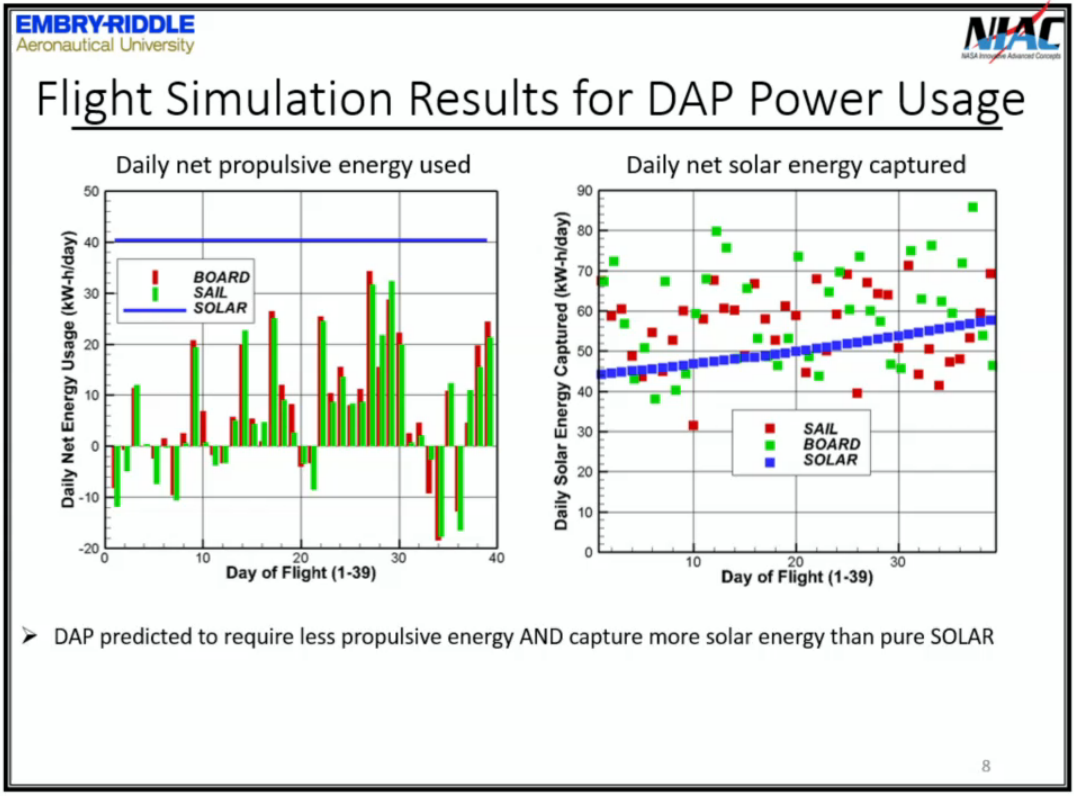 The only time you wouldn't be able to stay (near) Geostationary would be if the wind velocity is higher than your own maximum powered velocity, at all altitudes you are able to operate.

In any other situation, you simply fly in something resembling a circle over the area you with to loiter, or fly directly into the wind (zig-zagging if the wind is slower than your minimum airspeed). Which you choose will depend on your minimum/maximum airspeed, the windspeed, and how "stationary" you need to remain with reference to a point on the ground.

Then again, the above applies to almost any solar powered aircraft, so how about the specifics of this concept?

What are the potential advantages?

Winds at altitude are not always (or even usually) in the same direction, or at the same velocity. We can take advantage of this in some scenarios:

If you have, for example, a fast-moving stream of air near a slower moving body of air, or (even better) a body moving in roughly the opposite direction, you can fly slowly "upwind" in the slow moving stream (which doesn't use much energy, relatively speaking) then "surf" down the fast stream, harvesting energy as you go - you then use that gained energy to fly back into position, through the slow moving body.

If you get an even more ideal scenario, the slow moving body is in the opposite direction to the fast moving body, you can simply "float" around in the currents, harvesting energy most of the time.

The important part to note is that zig zagging (akin to tacking in sailing) - regular tacking requires you to change direction regularly to avoid going off course... with two aircraft tethered, however, they can "tack" away from each other without changing direction. Essentially, they can angle away from each other and vary the angle of incidence to remain relatively stationary within the wind: if the wind speed increases, you fly more "into" the wind, if it decreases, you fly more perpendicular to the wind (and therefore more "away" from your partner aircraft).

This combination of two aircraft tack-surfing (totally not a technical word, I definitely just made it up) mean you can "surf" the wind even when the windspeed is lower than your own stall speed, without having to tack as a single aircraft would. Tacking has a couple of disadvantages - it's more involved, and it means you are constantly travelling laterally across the wind, while two aircraft surfing together can stay in almost exactly the same place, merely by angling more or less into the wind. They can also, by coordinating power between themselves, move laterally along the "face" of the wind

In short, you have much more fine-grained control over your position, in more conditions

Not the answer you're looking for? Browse other questions tagged glider solar-power or ask your own question.

13
Is an “atmospheric geostationary satellite” feasible with current technology?