What's P-Factor and why does it occur?

Whenever I hear anyone talking about P-Factor, (whether it be single-engine left turning tendencies or multi-engine loss of directional control scenarios), someone always brings up the fact that the descending blade of a propeller generates more thrust than the ascending blade. I'm wondering why that's the case.

What is P-Factor and why does it occur?

For simplicity, assume a single-engine plane with a two-blade propeller. Just imagine an aircraft is perfectly level and moving forward through the air. The angle of attack on both blades of the propeller would be the same. Now imagine the plane pitches up a bit. One blade's angle of attack will increase and other will decrease. 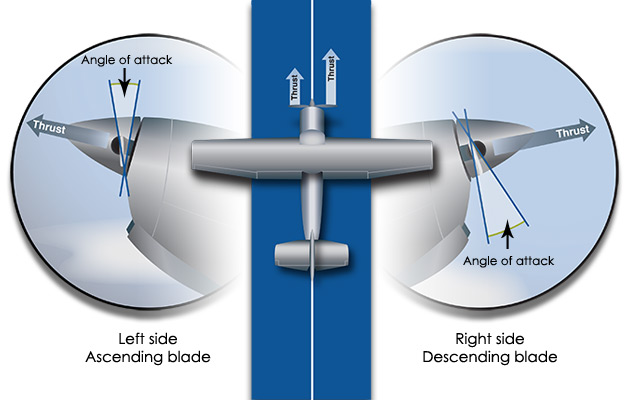 Within reason, the greater the angle of attack, the greater the thrust generated. So one blade (or, to be more precise, a blade on one side of the aircraft) will generate more thrust than the other.

Rather than try to do a full ground school session, I'm going to point you at the section on P-Factor in the awesome (free) textbook See How It Flies.

1
What is P-Factor in Propeller Aerodynamics?
27
Why do turbofan blade tips exceed the speed of sound while prop tips should not?
15
Why would a plane descend rapidly in uncontrolled manner after a steep turn?
9
How would you design an airplane to counteract a single engine’s left turning tendencies?
14
Why do propellers on aircraft have a slight offset angle?
4
How airworthy was the BV 141?
3
Does P-Factor increase with thrust?
0
Are two little engines or one big engine more efficient for an ultralight?
4
How to balance a propeller aircraft for left turning tendencies?

3
What's the difference between feathering, and flapping in a helicopter?
9
How does rudder lock occur?
3
Does Buoyant Lift Force scale with Load Factor?
5
Does load factor affect roll rate?
3
FAA test question about load factor
3
Does a decreasing shape factor correspond to greater or reduced probability of separation?
1
Can transition on an airfoil occur without prior separation?
2
What's the relationship between AOA and airspeed?
4
What's the difference between an accelerated stall and a dynamic stall?