There seems to be a certain class of airline accident where an airliner engine flames out followed by further unfortunate events. Very often, pilots are recorded as having attempted to restart a failed engine by windmilling, which seems to involve attempting to restart an engine from the rotation due to the passage of air due to airspeed. In accident reports this rarely ever succeeds, leaving the impression of a rather worthless exercise.

But, of course, there's a massive bias here because these are the reports of accidents and if the windmill start worked, things wouldn't have deteriorated.

So, in rough terms, how desperate is attempting a windmill start. Is it in the land-on-water level of optimism, or something which usually succeeds which we never hear about?

Windmill starts are a rather last-resort type of thing. Lots of things have to go wrong before pilots will be attempting that.

First, an engine has to fail. Since airliners are required to have at least 2 engines, and be able to fly on one engine, this isn't a dire emergency. Pilots will work the associated checklists. If there is no apparent issue they may attempt to restart the engine using bleed air from the running engine. If there is an issue they will leave it shut down. With thousands of planes in the air, this sort of thing happens pretty much daily.

The chances of the other engine failing are very low, and generally due to some common circumstances that affect both engines. Pilots may be more aggressive in trying to get even a damaged engine started, as a damaged one is better then none at all.

The APU may be started and used to help start the engines as well. But this takes time, which tends to be running out when gliding with no engines running.

As ymb1 pointed out, engines are required as part of certification to demonstrate windmill starts. Issues that can prevent this from working tend to get the attention of the safety folks. This establishes limits and guidelines that are put into the aircraft checklists. Pilots know that if they maintain a certain air speed, the engines should reach a certain RPM, which will allow them to be started. Of course if multiple engines have already failed, there is a chance that this issue will prevent a restart.

If the engine isn't damaged, and the restart altitude/speed are followed, the engine should start. Fuel starvation, bird ingestion, etc., do not count. 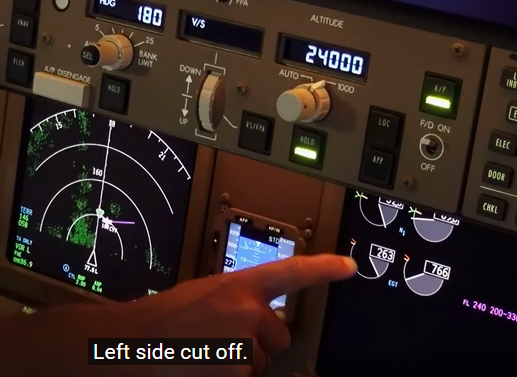 In-flight restart is tested as part of the aircraft certification, and it must work. In the link above is a video showing the procedure in a 777F simulator.

The "not-so-simple" part is that engines don't just flame out for no reason. They only flame out because something is abnormal, either with the engine itself or with the environment (ash clouds, sandstorms, torrential rain, fuel supply, etc).

Therefore, the probability of a successful engine restart is already compromised in some unknown manner by the fact that it stopped.

Deliberately shutting down an undamaged, low-life engine and demonstrating that it will relight, as part of the flight test certification program, is about as good a test as is practicable (there is no way any flight test program will go around looking for volcanic ash clouds to fly through, water ingestion tests done on an engine on a test stand on the ground can't be followed by a windmill relight test, etc) but it's not necessarily completely representative of a real-life engine relight situation.

The problem with windmill starts on a gas turbine is - it requires a fairly high airspeed, as mentioned in this bit on starting aircraft engines.

Typically, the APU, itself a smaller turboshaft engine, has an electric/battery start, while high pressure bleed air from it or another running engine or a ground supply is used to start a main engine.

The last thing you want to do if you're in that shape is lose more altitude than necessary when you have no power, and no other way to restart your engines.

Windmill starts on piston/prop planes in the 1930's and 1940's were performed, usually when the electric starter on one engine of a four engine aircraft had failed while the aircraft was parked. They would take off unladen on three engines, with the fourth prop feathered, and use the airflow to crank that engine to a start, then land and pick up whatever they were carrying and go on their way.

Or, WW2 fighter aircraft would windmill start when the pilot dropped external tanks but forgot to switch fuel supply to the main tanks. They'd just change the fuel settings, nose down and reset prop pitch, and fire the engine back up. In some cases, it was quicker than an electric start, or in the case of naval aircraft that used a high pressure shotgun shell starter, it was the only way to restart the engine in flight.

Not the answer you're looking for? Browse other questions tagged airliner jet-engine engine-failure or ask your own question.

1
Can an aircraft engine be started midair?
37
How, exactly, did US1549 land on the Hudson?
20
What is a "core lock" on an jet-engine?
8
Why weren't the Airbus A330 engines designed with a system to stop their fans?
12
How long does it take to restart a turbofan engine inflight?
9
What are the reliability statistics for modern jet engines?

13
How do jet engines work?
9
How often does fan blade out happen?
2
How does induction ice form in and affect jet engines?
12
How long does it take to restart a turbofan engine inflight?
2
Is there an alternative (more robust) operating law/setting for jet-engines? After one engine failed?
6
What is the minimum number of engines required for taxiing an airliner?
2
How much fuel does an airliner consume during passenger boarding?
2
How (often) are jet engines cleaned?
2
How often are turbine blades in jet engines replaced?